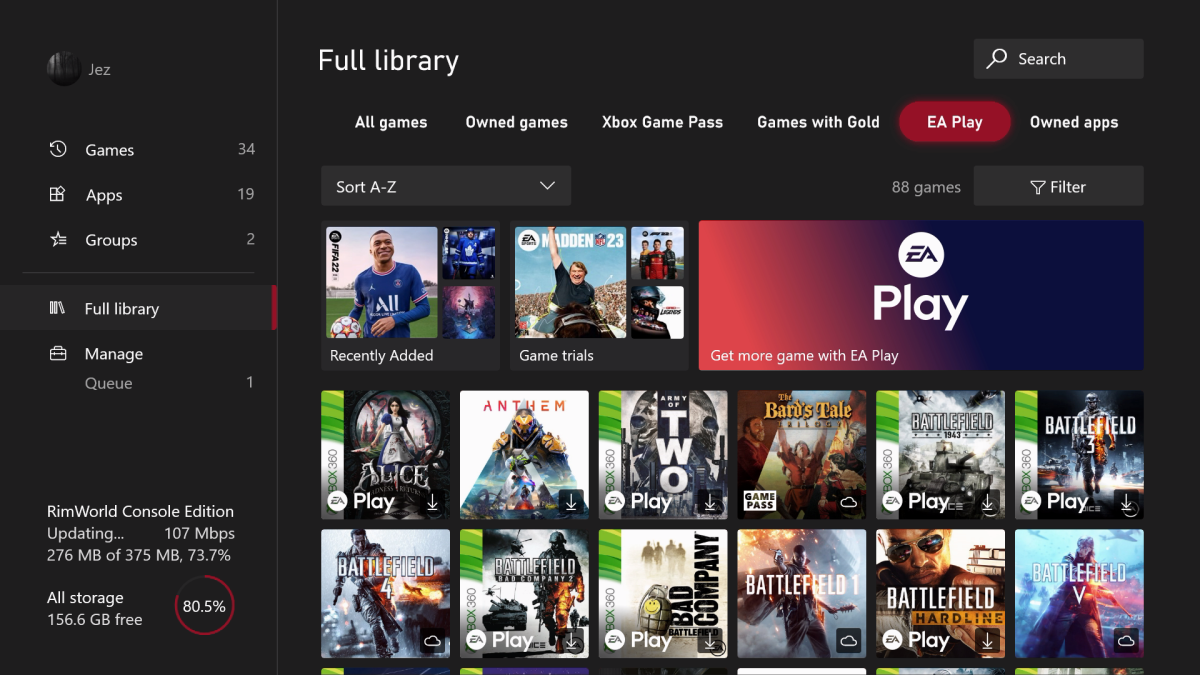 The Xbox dashboard has seen some interesting updates of late, most notably perhaps the inclusion of Discord as part of the Xbox Insider program. This latest Xbox Insider Alpha Ring build has made some notable changes to the Games & Apps section, which is normally where you go to browse all your installed content and games available for download.

The new interface revamps the “Full Library” section of the dashboard, which was admittedly a bit cluttered in the previous incarnation. Now, you have a quick tabbed interface with horizontal labels for different groups of content, separating the “own games” you purchased directly from libraries like Xbox Game Pass or EA Play.

Each tab section is designed with features specific to that content group in mind. For example, the full “own games” list doesn’t exactly need to show “recent additions” or “coming out soon” filters, which is exactly what the Xbox Game Pass tab does. You still get the regular filters as before, with the ability to change tile sizes to fit more content on a single screen.

At this time, the tabs are as follows:

To speculate, Microsoft may have created this stripped down section to incorporate other groups of future game subscriptions into the library. Recently, Ubisoft+ assets were discovered by lumia ornaments on Twitter in the Xbox back end. It further fuels previous rumors that Microsoft could be exploring a partnership with the publisher of Assassin’s Creed, in a collaboration that could be similar to the one Xbox Game Pass has with EA Play. Ubisoft+ is already available as a standalone service on PC, but can also be purchased as part of PlayStation Plus and even Amazon’s fledgling Luna streaming service.

Increasingly, it looks like subscription services are going to be a big part of AAA publishers’ revenue streams, and the shift to Xbox’s library of games and apps is likely designed to accommodate that. Xbox has been hard at work adding features and content to its own Xbox Game Pass service, with a Friends & Family plan on the horizon.

Xbox’s new library of games and apps is available now as part of the Xbox Insider Program and will likely be released to the general public in the coming weeks.