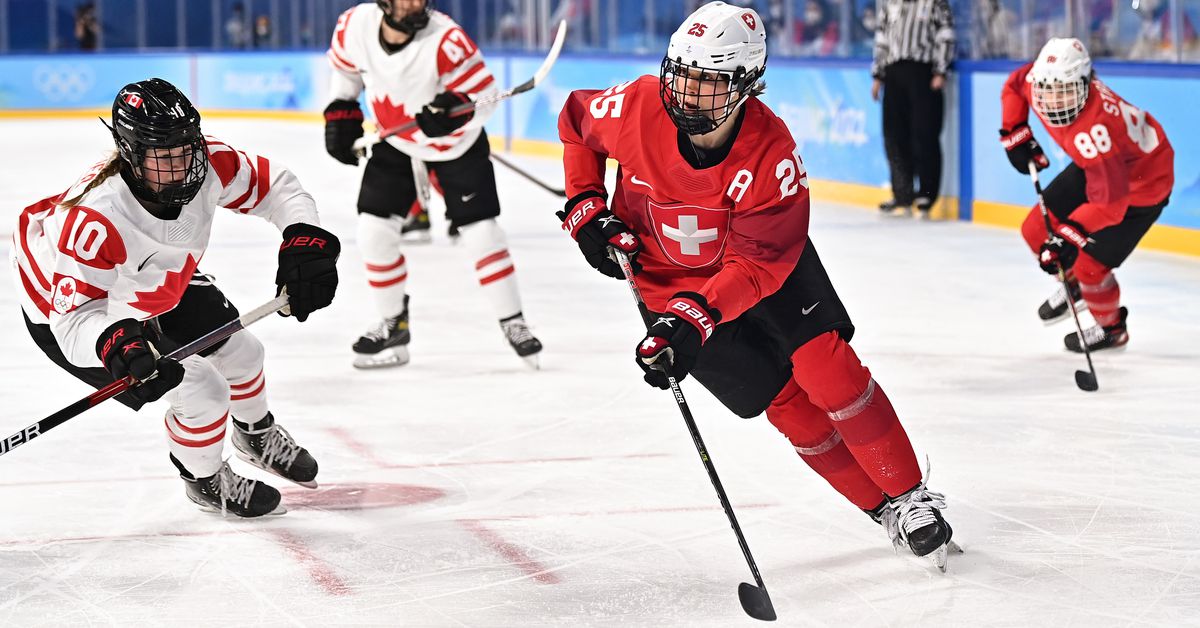 Day 3 featured a full four-game lineup: two in Pool A and two in Pool B. Let’s take a look at how they all played out, starting with our Game of the Day, Canada vs. Switzerland.

On the drop of the puck, Switzerland immediately went on the offensive. The key to their strategy was not to fall behind and let Canada control the game from the start. Canada was forced to back down, but quickly won the puck. Canada quickly took to the ice and began preparing their offense. Early in the first, they were able to execute their set plays without much interruption.

Canadian pressure was relentless but fruitless for 10 minutes. But just after the ten-minute mark, Canada broke through on a goal from Sarah Fillier. Feeding the puck into the spot, Filler spun and fired through a Potomak screen into the net.

Canadian pressure persisted until Switzerland had a power play to close the frame. Together, Alina Müller and Lara Stalder surrounded the offensive zone trying to do something their way. Despite their extended gaze, the two were unable to establish themselves and the Canadian defense was too strong. Throughout the game, these two were thwarted by the stars on all Canadian lines.

Canadian strength was evident throughout the period, with the shot count favoring Canada 14-3 after the first. The scoreboard, however, reflected a much closer game, with the Canadians holding just a one-goal lead. Although he lost, this Swiss felt very quiet in this game, considering that the last time they met, the Canadians defeated Switzerland 10-3.

The Swiss defended bravely and frantically, at times. Players like Noemi Ryhner were quick to get sticks and bodies on the Canadian shooting and passing lanes. The defender gave Swiss goalkeeper Andrea Brändli enough time to save 42 Canadian shots.

Sarah Fillier doubled the lead with her second goal of the match – another great shot. The pressure from Canada only seemed to get stronger and the Swiss legs grew tired.

Emily Clark scored Canada’s third goal of the match. The Swiss were clearly starting to struggle and failed to score a shot in the first 15 of the second period. They only had one chance against Canada’s 19.

Canada has a bad habit of falling behind in the third period of games in which they have the lead. Although not many, Switzerland had four shots in the period and held Canada to 14, Switzerland’s best period of the game. Switzerland got on the board with a great zone entry that caught Canada asleep.

A hard pass from the Swiss zone found Lana Marie Lutz on her own blue line. He passed it to a skating Alina Marti, who quickly redirected it to Laura Zimmerman and continued towards the net. Zimmerman took it to the zone and sent it through the slot to Marti, whose shot found its way through Ann-Renée Desbiens.

The goal did not help the form of the game much. Blayre Turnbull closed the match with a final goal. Canada defeats Switzerland 4-1.

The game was indicative of a Swiss team that is improving. The team is young, but all but two players are already in at least their second major international tournament. The team is clearly beginning to develop cohesiveness and comfort with themselves. They are also reaching the pace at which teams must play to stay at this level. The growth of this Swiss team in all tournaments in recent years is remarkable, and it will be explosive in the years to come.