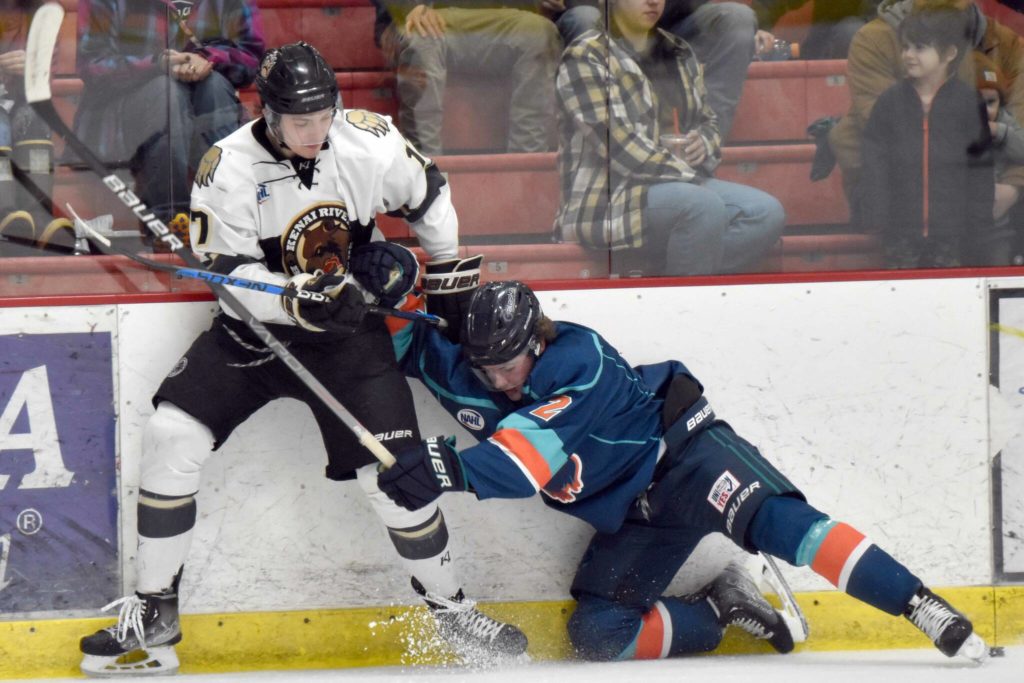 One of the primary purposes of the Kenai River Brown Bears program has always been to make local skaters successful.

On Saturday, the success of Trent Powell, who was born and raised in Soldotna, was costly for the Bears. Powell, an 18-year-old committed to Division I Long Island University, had two goals and an assist, including the game-winner, as the Anchorage Wolverines defeated the Bears 5-2 to complete a two-game sweep. in the Soldotna Regional. Sports complex at the North American Hockey League game.

The Bears finished with a 6-8-1 record in their longest home stay of the year and fell to 15-11-1-0, good for fourth place in the Midwest Division. The Wolverines are 11-10-4-1 and sit sixth in the tight eight-team division, where just 12 points separate first and last place.

The Wolverines remain a force in the 49 Club Cup as well, with 14 points to Fairbanks’ nine and Kenai River’s five. The Bears and Wolverines move the rivalry to the Ben Boeke Ice Arena in Anchorage for games at 7 pm on Friday and Saturday.

Kenai River doesn’t return to the sports complex until January 27.

“Hopefully, we can do the same for them and at least leave the state on a high note.”

On Friday, the Wolverines needed two last-minute goals for a 3-2 win, but Shaw wasn’t happy with the way his team played overall.

On Saturday, Shaw was happier with his team’s effort, but the coach said the Wolverines won the battle of the goaltenders and made the best of a penalty-filled second period.

Kenai River took the lead early in the second on a power play goal from a five-minute major late in the first period. Garett Drotts scored thanks to assists from Hunter Newhouse and Caleb Huffman.

Mason LeBel tied it for Anchorage with Powell and assists from Fedya Nikolayenya, but Ryan Finch, with help from Huffman and Ben Monson, made it 2-1 with 14:29 remaining in the second. Finch returned to the lineup this weekend after being sidelined since early October with injury.

Nikolayenya tied it for Anchorage, then Powell went to work, scoring power play goals with 6:54 and 5:04 remaining in the second to put his team up 4-2. The second count knocked Bears goaltender Bryant Marks out of the game with 20 saves on 24 shots. Nils Wallstrom came on and saved all nine shots he faced.

Powell now has five goals and six assists in 24 games for Anchorage. Three of those goals and two assists have come in the four games played at the sports center.

Although Powell has been skating at the sports complex since he was little, he said he doesn’t feel any different there and just tries to play his game. He said the extra space on the big sheet helps, as do the teammates that set him up for success.

“I just think it’s the luck of the draw,” he said of his success at the sports complex. “It’s a bit of luck that the fans and family are here.”

“He’s just Mr. Reliable,” Trupp said. “He plays the right way. He plays hard. You give him a tip and see him next turn. He is very coachable and has a good hockey sense.”

The Bears outshot Anchorage 40-34 despite having five power plays to Anchorage’s eight. Late in the second period, Kenai River pushed hard to get back into the game. Anchorage goaltender Shane Soderwall, who made 38 saves, stopped multiple flurries in front of the net.

“We’ve really focused on trying to win our net battles and giving him room to see the puck so he can make those saves,” Trupp said. “It was very good for us.”

The Anchorage coach said his team has been very good this season at making the third period dramatic, whether it’s making a big comeback or letting a team get back into the game. On Saturday, Trupp said his team did a good job closing out the game in the third quarter. David Tolan finished it off with an empty net with 1:25 to play.

“Penalties obviously kill the five-on-five momentum,” Shaw said. “I like the response from our group. I like that we fight against adversity and try to overcome it.

“For me, their goalkeeper made a few saves when he needed to, and we didn’t have that when we really needed it.”

Brown Bears defenseman Caleb Huffman, who is from Anchorage, committed to Division I University of Alaska Anchorage at the end of the week and will join the Seawolves after Christmas, meaning Huffman played his last home game with the Bears.

Shaw said it’s rare to lose a player to college in the middle of a season, but the Seawolves need a defenseman. The Bears lose a captain who has three goals and 12 assists in 27 games this season. Last season, Huffman had seven assists in 55 games for Kenai River.

“I mean, once every blue moon,” Shaw said of losing a player in the middle of the season. “We are super excited for him. We couldn’t be happier.

“He’s a night and day difference from the kid we had in the locker room last year. And the truth is, that’s all of him because he made the effort to fix everything.

Shaw said the 20-year-old Huffman took the long road to commitment. He said Huffman was heavier than he needed to be, then experienced a growth spurt that led to him being 6-foot-4 and 190 pounds, but that growth also forced Huffman to relearn how to skate. He continued to work in the lower levels of junior hockey before joining the Bears last season.

“Everybody wrote it off,” Shaw said. He has had a long journey. So for him to be able to get a contract to play in front of his mom, his dad and his family, that’s a good opportunity for him.”