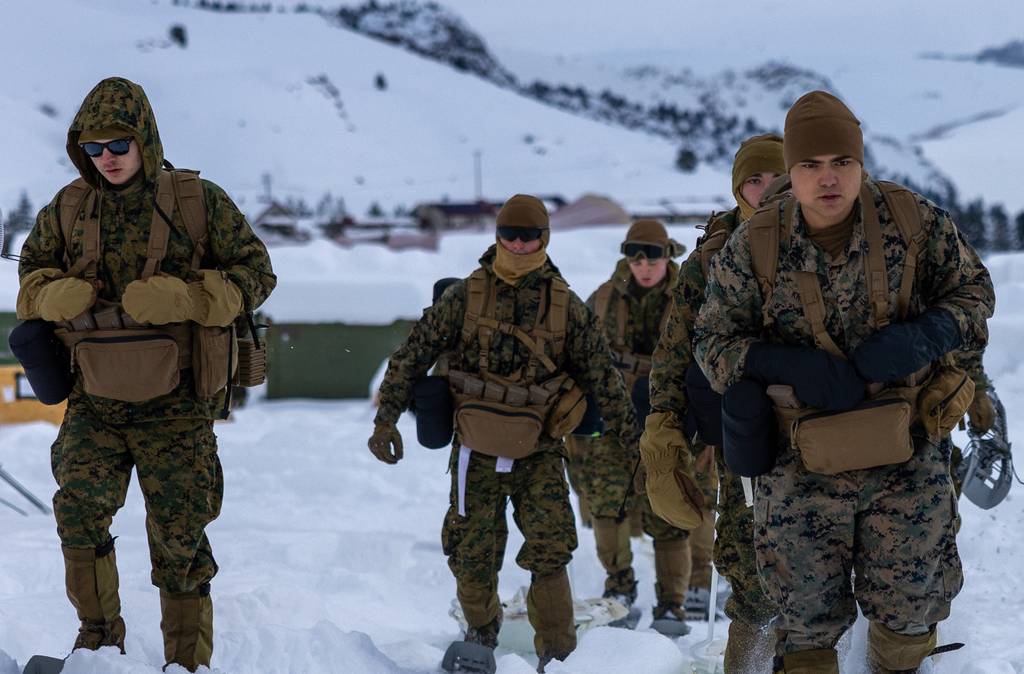 Put on your boots for the bitter cold: The Marine Corps is considering training its troops in Alaska, according to the service’s new training and education plan.

In the planning document, the service notes the need to explore options for expanding “unit training and service level to Alaska” and whether the service requires a more permanent presence there.

The Training and Education 2030 document, which was published on Tuesday, is the latest report in a series of policy plans that aim to set a new direction for the service. Included in the report is a direction to explore whether Alaska’s cold and remote environment could offer Marines a new style of terrain in which they have not had the opportunity to train regularly.

Currently, the Marine Corps Mountain Warfare Training Center in Bridgeport, California, is one of the only facilities offering training for Marines in cold-weather, mountainous environments.

Lt. Gen. Kevin Iiams, commanding general of the Marine Corps Training and Education Command, said during a roundtable event with reporters at the Pentagon Tuesday: “Our cold weather training range goes as far as…Bridgeport, although It’s big, it’s not as big as the training camps in Alaska.”

“He can put much bigger forces on the field and exercise them than we can at our little training center … in Bridgeport,” he said.

The Marines have also conducted cold-weather training on deployments to Norway.

“The current T&E system is not preparing the Marine Corps for the future operating environment,” the report said, noting that the Marine Corps must be better equipped to handle all types of domains.

With the Marine Corps’ renewed focus on the Indo-Pacific and continued threats from countries like Russia, North Korea and China, the service is eager to resolve that dilemma.

“Every climate, every location,” Col. Mark Smith, director of the Training and Education Command’s Division of Field Training Programs, told the roundtable.

By April, the Marine Corps says it will “identify complementary ranges, training areas, and federated [virtual simulator] headquarters” to offer all kinds of training for the troops, says the T&E 2030 document.

Service leaders are especially interested in the use of high-tech simulators as a modern means of training troops and are looking to launch what they call Project Tripoli to connect Marine Corps, joint and partner nation units in everyone.

Marines across the facility will be able to jump into virtual space and interact with one another to practice simulated missions, according to Iiams, meaning a spear corporal wearing eyepieces at a range somewhere can look up and see a plane flying overhead operated by a pilot using another simulator.

“We’re also going to have … real-time feedback,” Iiams said at the roundtable, offering troops better assessments as they progress through an exercise.

The T&E 2030 document notes that the Corps will have a cost estimate for the project in March and that it will be fully employed by September 2024.

The report also highlights the need to assess the service’s airspace needs in support of expanded training at all its facilities.

In other training news from the roundtable, Col. Eric Quehl, TECOM director of policy and standards, shared that a “rigorous” advanced rifle qualification course is being tested after entry-level training and is “progressing toward full operational capacity.

An additional timeline for when the use of Alaska for Marine Corps training purposes will be evaluated has yet to be announced, though Iiams told the roundtable that an annual update to the 2030 T&E report is likely, similar to the other planning documents. .

Jonathan is a writer and editor of the Military Times Early Bird Brief newsletter. Follow him on Twitter @lehrfeld_media