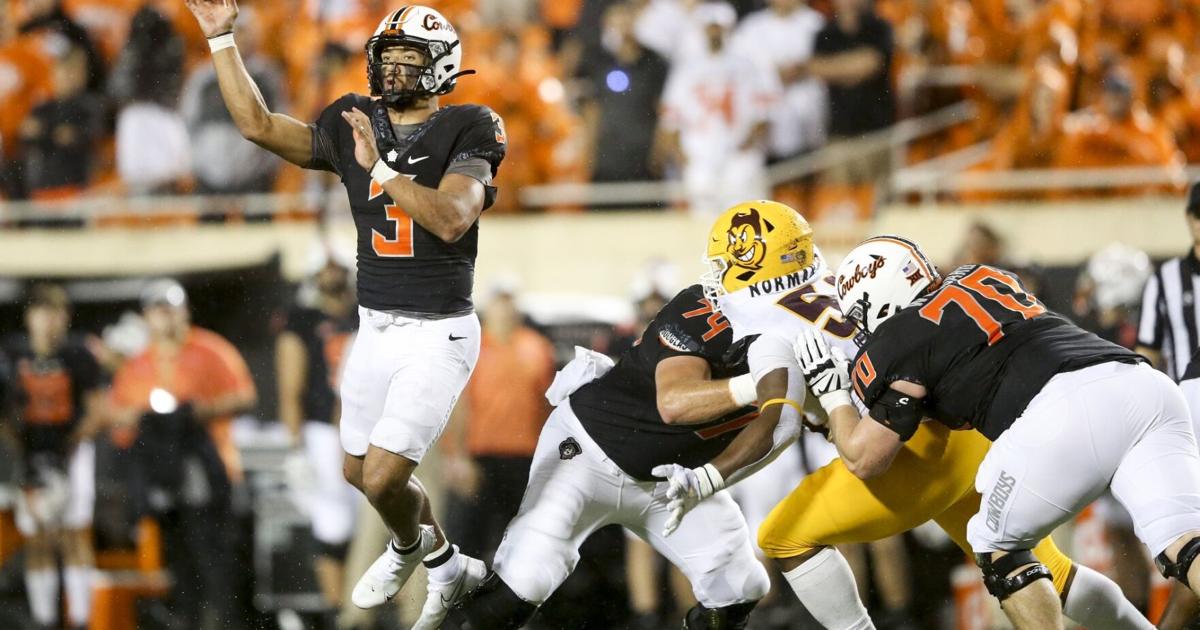 STILLWATER — About a month into the season, No. 9 Oklahoma State has run his business and shrugged off three non-conference opponents without much drama.

“It was a fun three games,” receiver Brennan Presley said. “We learned a lot about some of the players on the team, especially the new people. As far as the moment is concerned, we are focused on playing clean football. We have achieved some of our goals, but we have to do it consistently.”

An open date separated non-conference from conference play, beginning with a visit to Baylor in a highly anticipated rematch of the Big 12 championship game in December. The Bears are 3-1 after beating Iowa State on Saturday.

Here’s a closer look at OSU through three games:

that We have learned

The Cowboys have a lot of potential and this could be a special season with improvements from week to week. Spencer Sanders has racked up big numbers by emerging as one of the best quarterbacks in the nation, and he has more weapons than ever at his disposal, with a dozen players scoring a touchdown in three games.

That takes some pressure off a defense that has room to grow under a first-year coordinator and players in new roles. Despite that, OSU has provided solid defensive play particularly in the last two games and has benefited from a schedule that allows less experienced players to get more comfortable on the road.

What we don’t know yet

Can this defense hold up against the Big 12 opponents? The defensive line is ridiculously loaded and will match up well against any offensive line in the country, but the back seven haven’t been tested the way they will be throughout the league, starting with Baylor.

There are reasons to be optimistic. Linebackers Xavier Benson and Mason Cobb have eased into the starting lineup, and a secondary led by veteran safety Jason Taylor II has cut down on missed assignments and miscommunications since the start of the season. The extra week between games is also a plus for the defense to continue to progress.

At this point last season, the Cowboys were having trouble moving the ball in all aspects, especially in the running game. OSU averaged a measly 3.4 yards per attempt, a number that should have been considerably lower were it not for Jaylen Warren bursting onto the scene against Boise State.

Through three games this season, the Cowboys have gained 524 rushing yards on fewer carries thanks to Dominic Richardson and Sanders taking on most of the work. The Cowboys are also averaging 4.7 yards per attempt, an ideal median by Mike Gundy’s standards.

After starting cornerbacks Jarrick Bernard-Converse and Christian Holmes left this season, questions arose about how well they could replace Jabbar Muhammad and Korie Black. Through three games, the junior cornerbacks haven’t faltered, combining for 11 tackles and two pass breakups.

The question remains how they’ll fare playing a full game — they were both replaced by subs early in the second half against Central Michigan and Arkansas-Pine Bluff — but they’ve filled the void to this point without issue.

The biggest challenge ahead

In the Cowboys’ first five conference games, they will travel to Waco, Texas, to play defending champion Baylor, and Manhattan, Kansas, to face Deuce Vaughn and Kansas State. Sandwiched between them is Quinn Ewers’ Texas team visiting Stillwater.

That’s a collection of great offensive firepower for any defense, let alone a revamped one that hasn’t been battle-tested. The defensive line has driven the operation so far, and while the linebacking corps and secondary have played competently, much will be learned about defensive coordinator Derek Mason’s unit in the coming weeks.