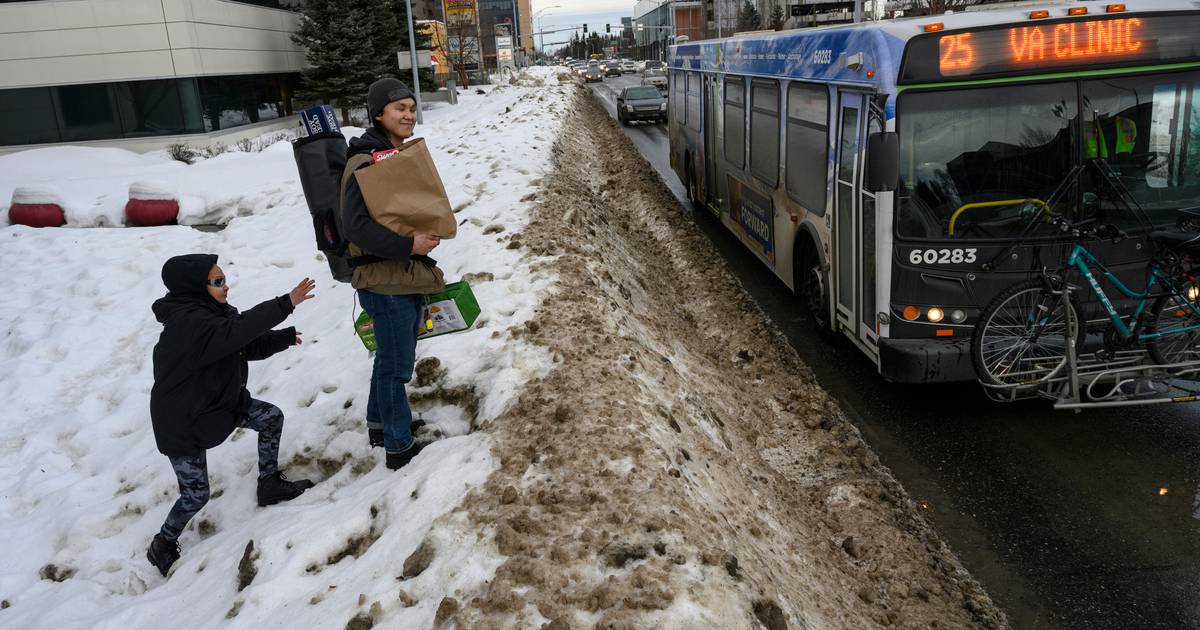 On a recent afternoon, Michael Haselow waited for the Anchorage People Mover at the top of a small mound of dirty snow that was supposed to be a bus stop.

Below him, traffic rushed down the Old Seward Highway.

Haselow takes the bus from this stretch of Old Seward Highway in South Anchorage to downtown every day. Conditions in recent weeks have been far less than ideal: Snow mounds left over from a series of December blizzards have eaten away at sidewalks and buried bus stops, turning them into rock-hard berms.

“Any bus stop you try to go to, you can’t get on because there are no sidewalks,” Haselow said. “And if you walk on the road, you get hit.”

When the bus came to a stop, he would be forced to speed down the icy slope of the berm, as if descending a miniature Mount Marathon. The drivers tried to make it as easy as possible, Haselow said. Still, he wondered why it has taken so long to fix the situation.

Six weeks after a series of blizzards dumped more than three feet of snow on the city, bus stops on a handful of Anchorage roads owned and maintained by the Alaska Department of Transportation and Public Facilities remain buried and treacherous. By midweek, bus stops along the west side of C Street and on Old Seward Highway had been swallowed up by berms, some four or five feet high.

So why haven’t the bus stops been cleared, weeks after most of the snow stopped falling?

“The main factor is the amount of snow,” said Justin Shelby, a spokesman for the transportation department. Removing snow from sidewalks and highways involves hauling between 200 and 800 trucks per mile, he said.

Bus stops along city-maintained roads are largely unburied, if not spotlessly cleaned. The city says the roadside bus stops it is responsible for maintaining were cleared within two weeks of the December storms, and that bus stop accessibility is a top priority for snow removal.

The remaining bus stops hidden by berms are an obvious problem, said Bart Rudolph, director of planning and communications for People Mover.

“Anyone can drive down the streets and see that there are large shoulders along entire sections of the highway that make it extremely difficult” for people to access bus stops, he said.

Who removes the snow?

The responsibility for clearing snow shoulders that block sidewalks falls to the state or the city, depending on the entity that owns the highway, Rudolph said.

The People Mover agency is responsible for removing snow only from bus stop platforms, the concrete plazas where people wait for the bus, Rudolph said. If the platforms are buried under hard berms, crews cannot reach them.

“We can only push the snow,” Rudolph said. “Once it freezes over, or if there are right-of-way issues, there’s nowhere to push the snow.”

After the December storms, VanLandingham said he opted to spend team time clearing sidewalks and opening paths to bus stops. In some cases, that led to the narrowing of streets that plagued the city for weeks, with two-lane streets reduced to one.

But, he said, “we believe we opened all sidewalks and bus stops in the City of Anchorage within two weeks of the snowfall,” he said.

The state DOT prioritizes the busiest state highways to clear and remove snow first, Shelby said. But it does not specifically prioritize ensuring access to bus stops.

Shelby said the department has taken care of the last few streets that haven’t been cleared and is aiming to finish the job, digging up the bus shelters, by the end of the week. But other maintenance needs could change that.

“If people are concerned about the amount of resources we can apply to snow removal, I encourage them to contact their local representative,” he said.

Doug Miller is an Anchorage attorney who is on the Anchorage Transit Advisory Board, a citizens’ group that advises the People Mover bus system. They have long heard from public transport users about the difficulties of taking the bus in snowy conditions. But the situation right now is “unacceptable,” he said.

Recently, a driver saw Miller standing on a shoulder and “pushed the bus as far as he could into the snow and then I basically jumped off the shoulder onto the bus,” he said.

It’s hard enough to do if you’re physically able and not wearing anything. But with groceries, a stroller, crutches, a wheelchair?

“There are probably a lot of people with disabilities who just can’t ride the bus right now,” Miller said.