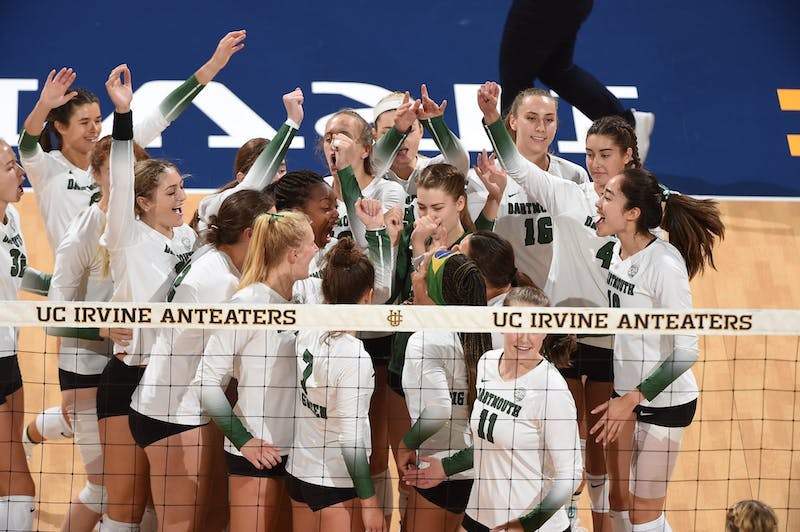 The Big Green traveled to the University of California, Irvine and swept their first two games against Sacred Heart University and College of the Holy Cross, but lost their final game against the Anteaters.

by Caroline York | 32 minutes ago

“We had a great off-season, but then we had a tough time on the road,” Stevens said. “Then about halfway through we were able to find a good rhythm and finish on top.”

The team’s showing at the UC Irvine Invitational is promising: Ellie Blain ’24 recorded 19 kills against Sacred Heart, close to her record of 21. Blain had the most kills for Big Green in the tournament with 29 overall and the most number of aces with two overall. In her first college tournament, Ava Roberts ’26 led the team in kills against UC Irvine with a new career-high eight. Amelia Gibbs ’24 led the Big Green in blocks with nine in the three games.

Dartmouth started the first game against Sacred Heart strong with a 10-2 lead, but lost the first set 25-23 due to a late scoring streak by Sacred Heart. In the second set, the Big Green had another early 3-2 lead, which they held throughout the match. The team nearly doubled their batting percentage between the first and second sets, going from .186 to .303. The Pioneers led the third set 17-10, but a spike from Gibbs helped Big Green fight back for a 21-20 lead. A final kill from Natalie Grover ’24 helped Dartmouth win the third set. The final set included eight draws. After a kill from Blain and an ace from Roberts, Big Green captured a 17-15 lead that lasted until late in the winning game.

The next day, Dartmouth faced Holy Cross and UC Irvine. The Big Green dominated the Crusaders in three straight sets. Although Holy Cross had an early 7-6 lead, Dartmouth grabbed the next seven of eight points and controlled the rest of the set with an easy 25-12 victory. Dartmouth quickly got through the second set with spikes from Gibbs, Gutz, Molly Power ’26 and Stevens. The Big Green easily took the set 25-8. Power completed three of four spikes in the third set and helped Dartmouth win 25-15, closing out the game.

“The first two wins were great; we came out of the gate strong,” Roberts said. “It was a great start to really focus on creating the team chemistry that we need for the season.”

Later that day, Dartmouth faced tournament host UC Irvine and lost all three sets. While the Anteaters started with an early 10-3 run, Big Green rallied to claim seven of the next nine points on kills from Blain and Gibbs. However, UC Irvine eventually took the first set after regaining momentum. The strong offense of the Anteaters dominated the second set and took a 25-12 victory. The Big Green worked to turn the tide in the third set with multiple drop shots. Although initially trailing by four points, the kills of Blain and Karen Murphy ’24 tied the game 22-22. The Big Green ultimately fell 25-23 to the Anteaters after a ball-handling error and kill.

Head coach Gilad Doron emphasized the team’s great ability to play cohesively with less than two weeks of training before the tournament.

“We met on August 19 and we only had 12 days to prepare for the trip to California,” Doron said. “We have committed players who find the time to do the workouts and stay in shape while doing internships or the summer of sophomores.”

Doron said he is optimistic for the rest of the season, especially after this tournament.

“It was great to see the resiliency and playability of the team, which allowed us to win [Sacred Heart and Holy Cross]Doron said. “He was very proud of the continuous improvement of the team throughout the match.”

Roberts, who played in her first college tournament in California, said she is looking forward to growing from these games.

“I learned a lot playing a new kind of speed against tall, powerful, older girls,” Roberts said. “We were able to see what worked in the first two games and the loss helped us understand what didn’t work.”

Despite losing to UC Irvine in California, Dartmouth has since dominated on the East Coast, winning six of seven of their previous games to set an 8-2 record. Dartmouth will travel to Cambridge, Massachusetts on September 24 to take on Harvard University in their first Ivy League game.