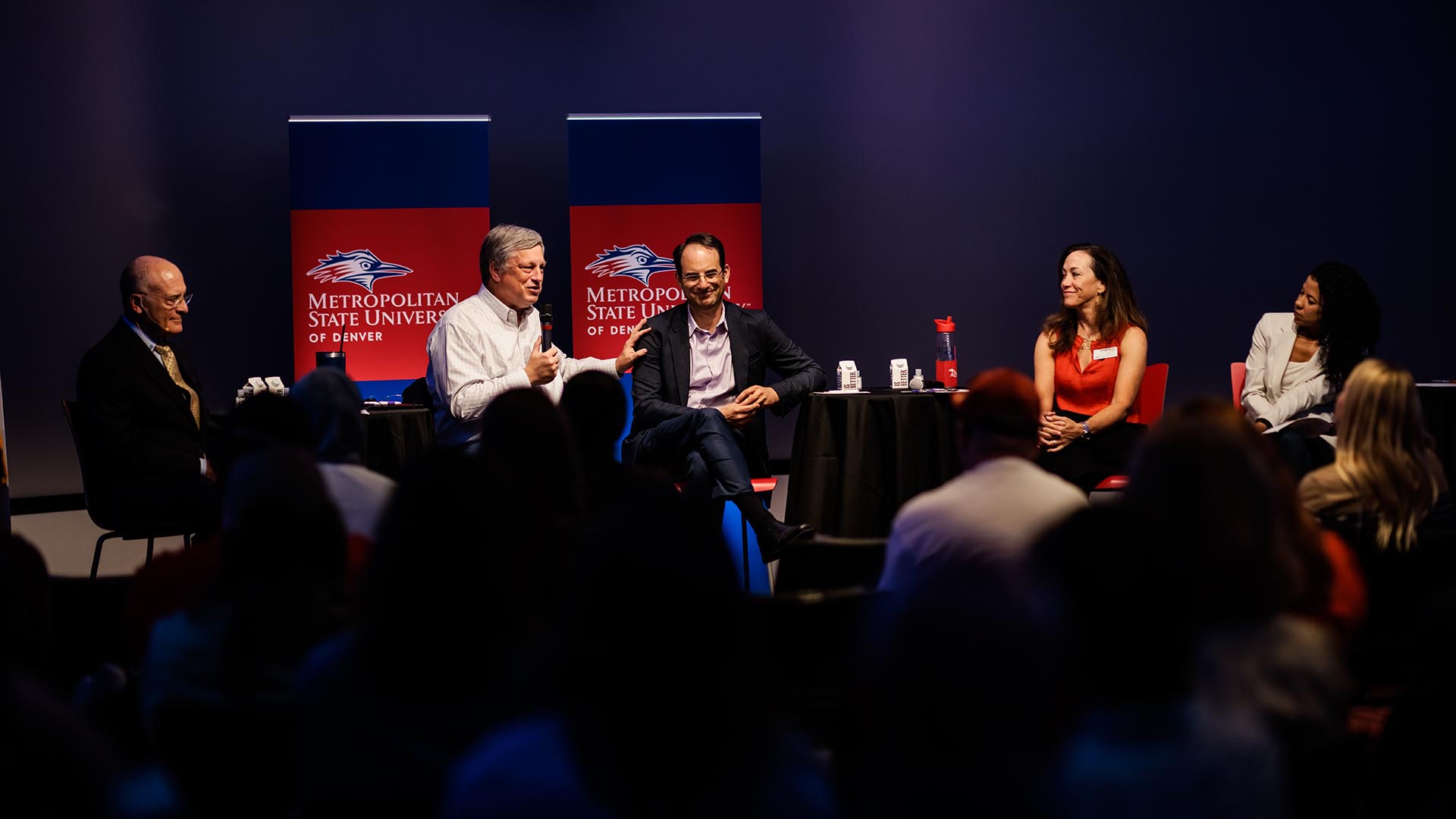 Against a landscape of 24/7 news chirons and the use of political grievance weapons, the rhetoric heading into this mid-term election cycle has never seemed hotter. That’s why the coolest heads at Metropolitan State University of Denver are reaffirming their commitment to free speech, expression, and research, with MSU Denver’s free speech statement playing a central role in fostering respectful engagement.

A healthy dialogue between us could help water the roots of a parched democracy, said MSU Denver President Janine Davidson, Ph.D.

“Shutting down people’s ideas and speech is not okay,” Davidson said at a panel discussion Thursday. “The alternative is to bring your A-game and participate respectfully, maybe even with a bit of humor. We are an educational institution, that is what we are supposed to do.”

The discussion began with a fundamental question: Is the ability to speak freely, the foundation of a healthy democracy, still relevant in these polarized times?

To help answer this, the University worked with the Bipartisan Policy Center, a Washington, DC-based think tank founded in 2007, to study more than 20 contemporary statements on free expression. The examples of the University of Richmond, Tufts University and the University of Denver served as a critical foundation for the development of MSU Denver’s free speech statement, Fine said. The final statement was crafted specifically to recognize the diverse community of MSU Denver.

“On the one hand, freedom of expression and getting to the truth (are) of vital importance in a university,” he said. “However, we also recognize that if someone is attacked by speech or otherwise, that is contrary to our values ​​and we must stand up for that person.”

The panel spoke extensively on philosophical constructs, including John Stuart Mills’ defense of the marketplace of ideas and the lack of monopolization of truth; the impact of identity and the demonization of the “others”; and unlikely historical friendships between rivals like Federalist James Madison and Anti-Federalist James Monroe (both Jefferson protégés), and the late Supreme Court Justices Ruth Bader Ginsberg and Antonin Scalia, whose famous odd couple spawned a comic opera.

Weiser noted how the latter couple inspired his launch of the Ginsberg/Scalia Initiative last year to help rebuild fundamental democratic institutions through interpersonal dialogue. Similarly, he and Williams participated in Unify Colorado, a nonpartisan initiative that brought together citizens with divergent views on big talking points.

“People are so polarized that the very concept of working with someone you disagree with is not only weird but wrong,” Williams added. “Our essence is that we, as civic leaders, have to work together even when we disagree.”

Campbell, who has been instrumental in the MSU Denver Dialogues Program, including the 2020 summer series on race in response to the police killing of George Floyd, noted the importance of seeing the humanity of others and understanding that with freedom of expression comes responsibility.

“We need to elevate public reason and rationality,” he said. “Not all opinions are equally valid, but they must be equally heard.”

Weiser echoed the importance of being heard in order to have a functioning representative democracy, something for which he acknowledged that the Colorado General Assembly is better than its national counterparts.

Davidson said MSU Denver’s leadership in the thought economy will be a national model for divorcing the personal from the political, emphasizing how to attack ideas rather than people.

History, he pointed out, has shown us the consequences of the opposite.

“Americans think bad things can’t happen here, but they can and they have,” Davidson said. “We have had one of the bloodiest civil wars in history, along with a massive civil rights conflict in this country. We still have a lot of conflicts and we have to mark that again.”

On campus, that includes invite-in, not cancel, encouraging conversations in and out of classrooms, and modeling critical inquiry on an assumption of good intentions and shared commitment to humanity.

It will certainly not be easy. But as the panel made clear, many are betting on places like the Auraria Campus to cultivate a body politic with the strongest constitution.