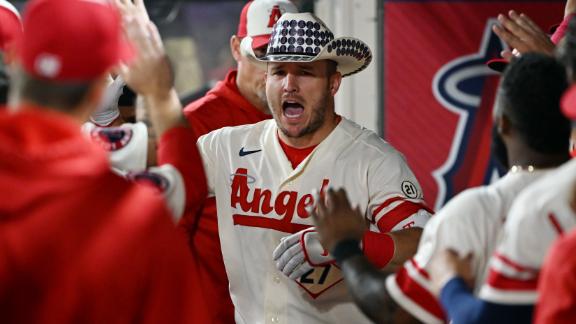 Trout homered in seven straight games, one shy of the major league record, before failing to hit one on Tuesday and Wednesday at Cleveland. He put the Angels ahead 5-3 when he led off the fifth with his 36th home run of the season, tying an Angel Stadium record for home runs for the fifth straight game.

Luis Rengifo threw deep from each side of the plate in his first career multi-homer game. He hit a solo homer in the third inning off the bat to right off Robbie Ray and a three-run homer off the bat to left in the sixth inning off Matthew Festa that put the Angels up 8-4.

Rookie Julio Rodríguez hit his fifth leadoff home run, his 27th of the season. Carlos Santana went deep twice to bring his total to 17 and Ty France scored his 19th.

France hit a two-run homer in the seventh off Andrew Wantz, but with the bases loaded, Sam Haggerty rolled for a late-inning double play off Jose Quijada.

Santana hit a two-run homer in the fourth and a solo shot with one out in the ninth off Ryan Tepera, who struck out Jesse Winker and retired JP Crawford with a flyout for his third save.

HONORING IN GRAND A

Mariners: 3B Eugenio Suarez left midway through the fifth inning with an apparent right wrist injury when he flied out to right field. … OF Mitch Haniger (back) was out of the starting lineup for the third straight game, but he hit before the game and did some running in the outfield with the possibility that he might return on Saturday. … INF/OF Dylan Moore (oblique) went 1-for-4 for Triple-A Tacoma at the start of a rehab assignment and could return during this series. … C Cal Raleigh (thumb) was injured sliding into first base this week and did not play.

Angels: INF David Fletcher (hand), who has been reduced to bunts for the past few at-bats, was out of the starting lineup and underwent a CT scan before entering the game in the sixth inning as a pinch runner.