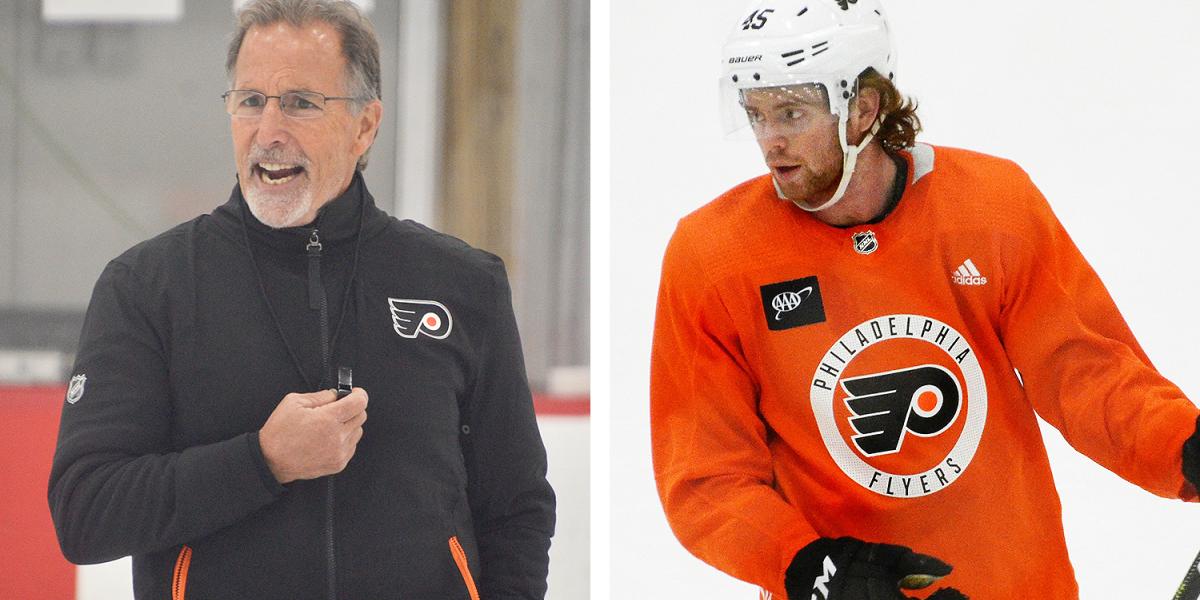 VOORHEES, NJ — The Flyers played a pair of scrimmage games on Day 2 of training camp on Friday.

John Tortorella wasn’t making much of them.

After all, there are more than 60 healthy players in Flyers camp and Tortorella didn’t see any of them touch a single puck on Day 1.

You are even getting familiar with some of their names.

The real evaluation of the head coach’s roster will begin with exhibition action, which begins Saturday when the Flyers welcome the Bruins to the Wells Fargo Center (7 pm ET/NBCSP+).

“I’m not going to base decisions on internal skirmishes like this,” Tortorella said Friday, “but it gives them a chance to play.

“That’s my biggest battle right now, just getting familiar with the team and the staff.”

Let’s go into three observations from Day 2 at the Flyers Training Center.

Tortorella won’t be behind the bench for the Flyers’ first four preseason games. He goes to watch from the team admin suite at the top.

The plan is for AHL-affiliated head coach Ian Laperriere and his staff to coach the first two exhibition matchups, then Flyers assistant coaches Brad Shaw, Rocky Thompson and Darryl Williams will coach the next two. Tortorella, together with his assistants, will train the two finalists.

Tortorella wasn’t on the lookout for intangibles during scrimmages.

“I want to wait until it’s against another team that they haven’t just had breakfast with,” he said. “But I can get acquainted with people.”

General manager Chuck Fletcher and his staff will put together the lineup for the first three preseason games.

“I’m giving them the first three games because I think it’s important for them to see some of the kids,” Tortorella said. “Chuck is in charge of the whole organization, he needs to put the pieces together in terms of where they sit and give people opportunities. Chuck has done that. We have three games, there may be some changes, but I like the management group to put them together. “.

You can find the Flyers’ preseason and camp schedules here.

Each scrimmage lasted just under an hour. The two teams that lost were whited out on the scoreboard.

After practices, each team did approximately 30 minutes of drills, followed by more laps for conditioning.

“The way camp is set up, we have 13 or 14 players on each team,” Tortorella said. “So it’s just been three hours of a lot of touching inside the scrimmage, a lot of skating in the scrimmage, a lot of skating in practice, plus some pretty good conditioning skating. I’m really happy, I think our camp looks like it’s in pretty good shape. When you start to get to, probably Day 4, in that area, I think that’s when you see where the guys really are in terms of their conditioning, how they bounce back.”

Nicolas Deslauriers received an accolade Thursday from Tortorella for the winger’s “ugly as hell” performance in the skating glove. He received more validation later. Sean Couturier, among others, called Deslauriers’ phone about it.

“I got a few texts from the date saying it was ugly, but it got the job done,” Deslauriers said with a smile. “I talked to Torts a lot on the phone and he told me it was going to be tough. I don’t give up on my game. It may be ugly, it may not be nice, but that’s how I work.

Catch me if Cam

Fletcher mentioned the possibility that the Flyers have 10 players 25 and younger on their roster.

Cam York, the No. 1 draft pick made by this Flyers regimen, is clearly one of those 10.

“To me, that’s the main story of this camp: Let’s see what we’ve got, let’s see how good these kids are,” the general manager said Thursday.

There were a couple of under-the-radar sequences for York in Friday’s second game.

While returning for a puck, the 21-year-old defender took a heavy hit from Deslauriers. York isn’t a big guy (6-0/180), so it’s going to be important to survive these kinds of checks when a striker lunges at him.

More often than not, York prides himself on avoiding these hits with quick and smart decision-making.

Later in the fight, he showed good poise in orchestrating his team’s exit from the defensive zone with a deft play.

Cam York’s subtle but critical strengths are his poise and decision-making under pressure.

His team leaves the zone and ice is raised all over his game here. pic.twitter.com/S2pReHYNMM

Those are qualities the Flyers need.

“I’m going to play with the kids, I’ll tell them right now,” Tortorella said Thursday. “I don’t care about height, draft pick, whatever, whatever you’ve done before. … It’s kind of a clean slate for me because I don’t really know the players, I need to watch.” to them.

“I think there has to be a little bit of merit here in terms of everybody’s position.”