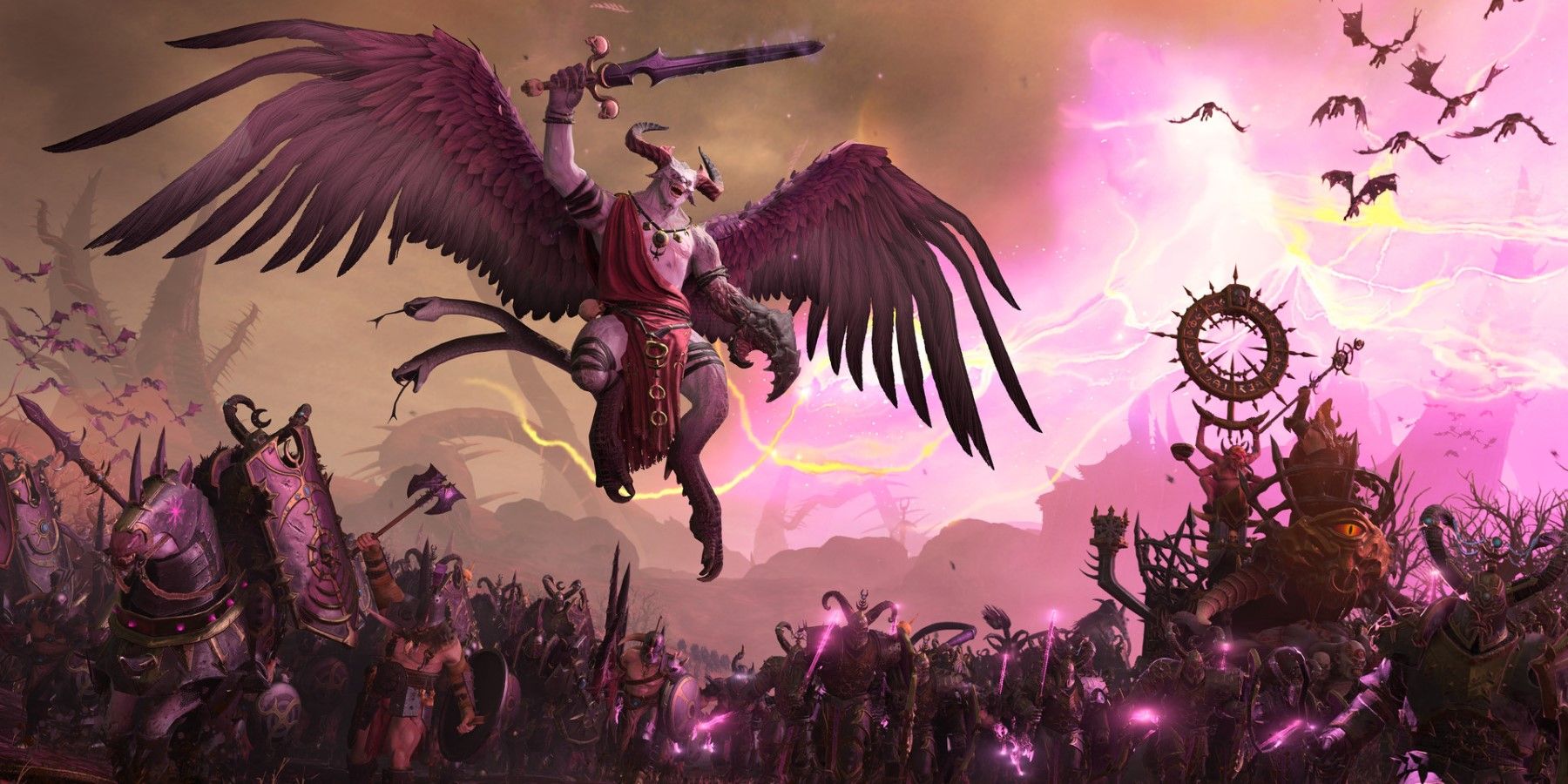 Total War: Warhammer 3 introduces even more factions and features to the successful collaboration strategy between Games Workshop and Creative Assembly. As new armies prepare to take to the field, some old favorites are also being upgraded. The Champions of Chaos DLC for Total War: Warhammer 3 introduces four new Legendary Lords for players to command, each leading a hybrid faction of Warriors of Chaos.

Each of the Chaos Champions is dedicated to a single Chaos God, and the Champion of Slaanesh is Azazel. As a devotee of the Dark Prince of Pleasure, Azazel focuses on a combination of speed and seduction. On the battlefield, Azazel’s armies can use their Slaanesh-infused powers to make devastating flank attacks, while his Heroes can spread the corruption of Slaanesh among other factions, ultimately turning them into unwitting vassals.

RELATED: Total War: Warhammer 3 – How To Play The Goldtooth Faction

Azazel is a corrupting force on the campaign map of Total War: Warhammer 3, slowly bending other factions to his will without conquest. His particular focus is on human factions like The Empire, Bretonnia, and Grand Cathay, as he gains a huge +80 diplomatic favor with them as one of his faction traits. With the Seductive Influence mechanic, Azazel can subvert mortal factions from within. Unlike N’Kari and the Seducers of Slaanesh, Azazel cannot create cults. Therefore, he must rely on diplomatic treaties, Slaaneshi corruption, and Slaanesh gifts to extend his influence.

Defeating a Lord in battle or completing an Agent action against him will imbue that character with a Gift of Slaanesh. Each Gift gives Azazel 8 Influence for a turn with that Lord’s faction, which will increase the Seduction level as long as it overcomes penalties based on the faction’s number of settlements and natural aversion to Slaanesh. The only way to remove a Gift of Slaanesh is to defeat a Slaanesh army in battle.

Fully seducing a faction to the point where they can be automatically vassalized for 2000 souls will take time, meaning players should start early with their seduction schemes. A good tactic is to pick an important but distant target like Reikland early in the game and send out some heroes to start seducing them as soon as possible. The players must keep a close watch on your target’s lands, looking for Lords who lack the Gift of Slaanesh. The more Lords that receive the Gift, the faster the target faction can be vassalized into the service of the Dark Prince of Pleasure.

Although Azazel must rely on his seductive influence to make vassals of most factions in the game, he can Automatically gain control of the Norscan tribes by occupying the Dark Fortresses in their homelands. Dark Fortresses are rare places where the Warriors of Chaos can build their most powerful settlements in Total War: Warhammer 3. Each Dark Fortress in Norsca and the Chaos Wastes is marked with an associated Norsca faction. If the players take the Fortress, the faction will automatically be vassalized.

Of all the Champions of Chaos in Total War: Warhammer 3, Azazel is in the best position to take full advantage of this mechanic. As his Heroes begin the process of seducing the southern kingdoms of the Total War: Warhammer 3 map, it’s a good idea for Azazel to stay in Norsca for the first part of the game. By targeting the Dark Fortresses, players should be able to vassalize most of Norsca in 15 turns, creating some useful allies for future conquests.

RELATED: Total War: Warhammer 3 – How To Play The Oracles Of Tzeentch Faction

Fighting deadly opponents like Norsca will also grant Azazel an early Souls boost, the only Chaos Warriors resource. These souls are used both for the Gifts of Chaos mechanic and to upgrade Lords and Heroes of Azazel. Undivided characters can use souls to dedicate themselves to Slaanesh, gaining new powers and abilities at the cost of half their levels. Alternatively, players can spend Souls to transform a high-ranking Lord into an immortal Daemon Prince, granting incredible power but again at the cost of half the Lord’s levels.

Like all Legendary Lords in Warriors of Chaos, Azazel has several ways to recruit and upgrade his troops. The first is Recruitment of war bands, which can be done anywhere on the map, but is limited to the units available in that province at the time. Each province has a small pool of units to recruit, based on factors like weather and Total War: Warhammer 3The corruption of Chaos. These units have a chance to replenish each turn, with rarer and more powerful units having less chance to replenish.

All Warband units can be upgraded once they reach certain ranks if the correct technologies have been unlocked. These upgrades will transform the unit into a higher tier equivalent, with Marauders becoming Warriors and then Warriors becoming Chosen as an example. As a Slaanesh devotee, Azazel can keep his Warband troops as generic Chaos Undivided, or transform them into Slaanesh-marked units, granting unique bonuses suitable for the Prince of Pleasure. Each Lord will have a different Authority over Slaanesh or Undivided units, granting bonuses based on factors including Traits, Skills and Heroes in the army.

In addition to recruiting warbands, Azazel can also receive demonic units from the Seducers of Slaanesh list using the Gifts of Chaos mechanic. Once a Gift of Chaos that grants units is assigned, players will be able to regularly recruit small amounts of that unit into their armies. Finally, Azazel can take advantage of his many vassals by building outposts in their settlements, giving him access to a limited number of units outside of the Warriors of Chaos faction.

Azazel on the battlefield

As the dedicated Chaos Champion of Slaanesh, Azazel brings a unique and powerful hybrid roster of deadly and demonic units to the battlefield. While N’kari can fight tough factions like Cathay for having too many hammers and too few anvils for proper hammer and anvil tactics, Azazel’s forces are much more balanced. Warriors of Chaos and Chosen, whether Slaanesh-branded or not, they form the Iron Frontline of the Ecstatic Legion, while a mix of Hellstriders, knights and chariots can perform devastating flanking maneuvers.

Azazel’s Slaaneshi Legions combine the staying power of the original. Total War: Warhammer Warriors of Chaos with the speed and maneuverability of factions such as the Seducers of Slaanesh and Beastmen. This deadly combination, further enhanced through the use of vassal units and powerful sorcerers, will allow Azazel to dominate in both open fields and siege battles.