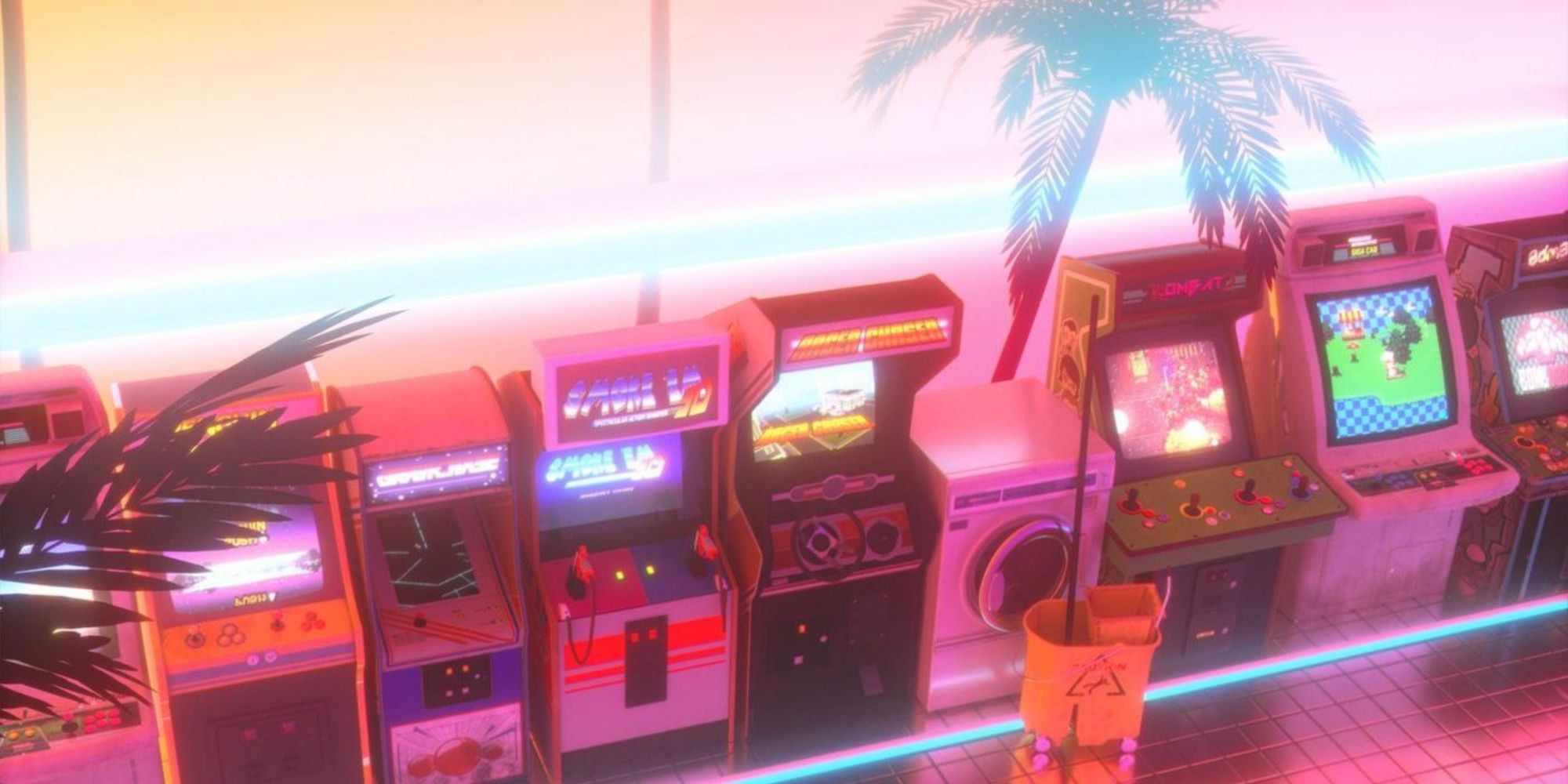 Business management meets arcade gaming in Arcade Paradise, an indie game where you build an arcade business from the back room of a run-down laundromat. Of course, the place won’t stay run-down for long, as patrons pass by and witness the nostalgia-fueled neon wonderland it has begun to create.

Game cabinets aren’t just business assets at Arcade Paradise – you can also play the games you’re buying. With over 30 games to choose from, it can be hard to know what to spend your hard-earned money on.

While the cabinets at Arcade Paradise pay homage to multiple eras of arcade gaming, the overall aesthetic of the game is unmistakably ’80s. While it’s not really a problem that many of the cabinets you can buy at Arcade Paradise are not fit the 80’s vibe, any cabinet that matches this vibe automatically becomes a more attractive purchase.

There’s no more ’80s-appropriate cabinet in Arcade Paradise than Communists from Mars, a simple shooter that replaces aliens with communists to form a brilliant little joke about 1980s communism-focused paranoia.

Barkanoid is a simple Breakout clone with one key change to the brick-breaking formula: the paddle is a Dachshund. In addition to bringing a dachshund to Breakout, Barkanoid also adds a few small gameplay tweaks like lasers and changing the dog’s size to keep you interested while you’re losing lives because you’re too busy looking at the dog.

Related: The Cutest Video Games Ever

Just adding an animal and a couple of extra mechanics to an existing game isn’t going to set the world on fire. However, it certainly makes Barkanoid worth buying for those times when you need some cute animal therapy after unlocking the laundromat toilets.

Zombat 2 is a twin-stick shooter with a surprisingly demanding learning curve. It’s also another example of Arcade Paradise’s commitment to making their lineup of cabinets feel timeless by merging multiple eras of gaming.

In the case of Zombat 2, simplistic ’80s-style graphics and gameplay are combined with upgrade and purchase systems you might expect to see in a modern title. While Zombat 2’s gameplay is a bit shallow for the genre, there’s no other game like it in Arcade Paradise’s lineup, making it a must-buy for your arcade.

Arcade Paradise is full of mix of genres. Perhaps the strangest among them is Racer Chaser, a game that combines Pac-man with top-down Grand Theft Auto games. Yes, it’s as weird as it sounds. The gameplay borrows more from Pac-man than GTA, as you primarily control a car driving through a city from a top-down perspective, on the run from cops taking the place of Pac-man’s ghosts.

Ignoring the absurdity of the mashup, Racer Chaser is actually a pretty faithful homage to Pac-man, almost like one of those obscure Pac-man spin-off games that were everywhere in the 2000s.

Woodgal’s Adventure is one of the most well-rounded games in Arcade Paradise and comes with a gameplay loop that could easily have come out of the mobile app stores of the early 2010s. Most of Woodgal’s Adventure sees you traversing an overworld by Toejam & Earl style and fighting battles with mechanics reminiscent of Candy Crush and its legion of imitators.

While Woodgal’s Adventure certainly doesn’t have the best aesthetic of the games in Arcade Paradise, its gameplay and overall polish rank it among the best arcade cabinets around.

Cyber ​​Dance is perhaps the game that contrasts the most with the predominantly 80s arcade aesthetic, thanks to its resemblance to the late 90s arcade phenomenon Dance Dance Revolution. However, any potential timeline issues that Cyber ​​Dance might create are quickly forgiven. After all, how do you make an arcade tycoon game and not include a Dance Dance Revolution clone?

While it’s certainly a very good game to have in your arcade (and a great moneymaker), the lack of an iconic Cyber ​​Dance platformer peripheral dampens its gameplay significantly. It settles for a typical WASD/arrow keys rhythm game with a DDR skin. Fortunately, the nostalgia this skin creates is still cool enough to make it on this list.

Vostok 2093 is Arcade Paradise’s only shoot-em-up, a safe but satisfying homage to the classic arcade genre. It is also a very good version. Galaga’s influence is everywhere and obvious, and not necessarily a bad thing. Waves of enemy aliens, special weapons, and bosses appear in Vostok 2093, and it all largely works.

Vostok 2093’s biggest flaw is its gender. In recent years, shoot-em-ups have seen a huge resurgence. Anyone who’s played one of the great new entries in the genre will probably spend their time playing Vostok wondering why they’re not playing one of those better indie shooters instead.

Space Race Simulator is one of the most brazen homages to Arcade Paradise, a racing game that takes inspiration from Sega’s Outrun. While Arcade Paradise’s take on 1980s arcade racing lacks the non-linear progression and depth of the gameplay it’s based on, it still delivers in the gameplay department.

The visual and audio presentation is incredibly precise, and the controls are faithful enough to send you into such deep nostalgia that you Google how much it would cost to ship an Outrun cabinet to your living room.

Knuckles & Knees is a surprisingly fleshed out beat-em-up inspired by the Final Fight series. The relative depth and length of Arcade Paradise’s attempt at this classic arcade genre makes it the best traditional cabinet in the game.

Knuckles & Knees is also in the unique position of bringing nostalgia to some of Arcade Paradise’s younger gamers, thanks to the incredible longevity of The Simpsons and TMNT beat-em-up cabinets that swept the world back in the years. 90 and 2000.

Video Air Hockey is with you from the start of Arcade Paradise, and it’s the perfect game to come back to from time to time, even in the late game hours. Its remarkably simple graphics allow it to lean into the realm of CRT screen nostalgia that Arcade Paradise creates when it’s at its best.

The choice to have Video Air Hockey available right at the start of the game is great. The constant presence of air hockey machines in arcades ensures that playing Video Air Hockey will remind you of your favorite arcade days and urge you to build your own arcade empire in honor of them.

Next: The best games on Apple Arcade