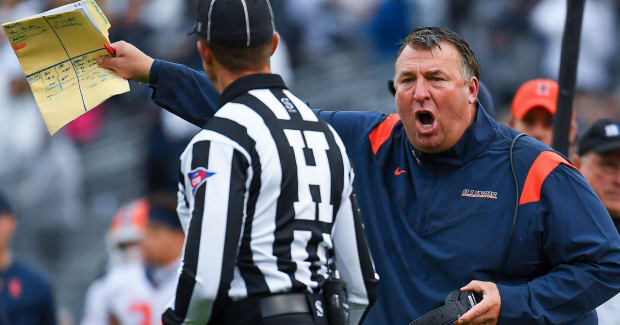 It’s Week 0 in college football, which means there’s technically college football on TV. So with no Razorback game or high-profile blockbuster on the record, what’s an Arkansas football fan to do today to pass the time?

The correct answer is to go fishing. However, it can get a little too hot in the afternoon to be on the water, especially in a lake or river with minimal tree cover.

That leaves us with a backup plan. If your other half isn’t a tough college football plan, this is the perfect weekend to “realize” that the kids won’t have clothes that fit when the weather changes, spend the money you were going to spend on catch fish and send him on a clothing shopping spree with a warm smile.

Now, what is he going to bring you? From Arkansas’ perspective, there are three worthwhile games that will take you roughly 11,000 miles from Ireland to Hawaii.

Keeping up with Bret Bielema is always an interesting way to pass the time for Hogs fans. However, the real purpose here is to include Barry Lunney, Jr.

Lunney, who is a fixture in the Razorback culture and previously served as interim head coach, had a lot of success with Jeff Traylor as part of UTSA’s historic run. However, the ultimate test for a man many believe has potential as a head coach is whether he can generate success under the limitations that come with being part of a Bielema regime.

If Lunney can show that he can bring talent to Illinois despite Bielema’s reputation for not being the most committed during the recruiting process and that he can score points despite being weighed down by Bielema’s 1980s offensive philosophy, Champaign won’t be long. .

This one is intriguing because:

1) Vanderbilt has a chance to pick up a win and maybe build some momentum.

2) The insanity that followed with the government holding a hearing to determine if a college should fire a coach followed by the hiring of the island’s golden boy outweighs the shenanigans at Auburn and even outweighs the meddling that takes place in the future member of the SEC, Texas.

3) The Commodores received a first place vote in the SEC East media poll, so this is the start of a championship race that dethrones Georgia?

There’s a reason Vanderbilt has a chance to hang on in the Power 5 realignment despite his lack of football prowess. The Commodores are the little brother of the SEC that everyone protects and they can’t help but cheer and smile when Vanderbilt has the slightest moral victory.

For those who don’t remember, new Hawaii coach Timmy Chang was the multi-record setting quarterback who convinced his parents to let him turn down Pac 12 offers at places like USC so he could play literally across the street in Hawaii.

Even though these two teams, separated by just 500 miles, chose to fly to Ireland to play, the big intrigue here is whether this game becomes Scott Frost’s Citadel or western Kentucky. These two teams were tied for last place in their division after seasons of dumpster fires.

You may remember Frost from his cameo in the SEC shorts parody made specifically for ESPN that featured the pick of Sam Pittman in a hidden temple where would-be coaches were kept.

Frost was the no-brainer that was chosen without thought, while careful consideration forced the person who chose Arkansas past several set cars to Pittman, who was stored in a not-so-conspicuous location.

Locking in last place in the Big Ten after Game 1 of the season is not a good way to get a contract extension. This has all the potential that you can’t help but intrigue to see a car accident that you can see coming before it happens.

If the Nebraska chiefs take the same approach Arkansas took in firing Bielema, Frost could walk away with only literally one game in the entire 2022 college football season on the books.

JEFFERSON SHOULD HAVE TALLER PIGS THAN AGGIES THIS YEAR

ALABAMA FANS FIGHTING WITH WHAT ARKANSAS FANS KNOW SO WELL

TERRY HAMPTON FINALLY WHERE HE WANTS TO BE AFTER JONESBORO BYPASS

Return to the allHogs home page.

• Want to join the discussion? Click here to become a member of the allHOGS message board community today!