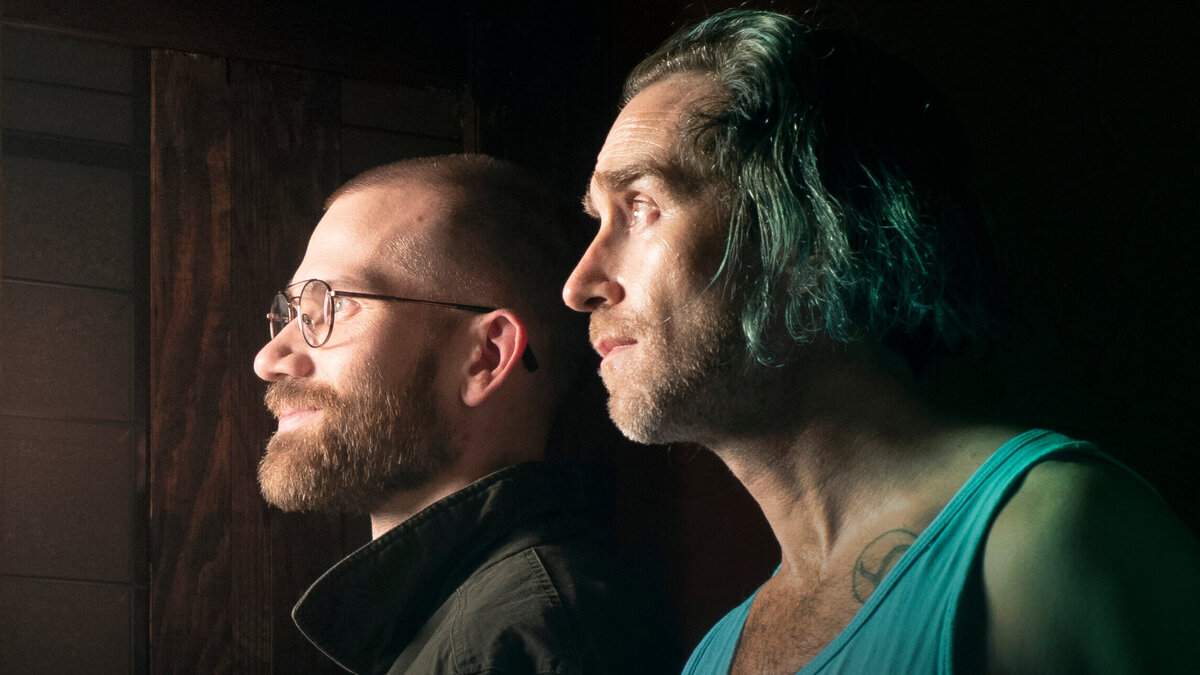 The concept of the movie “Something on Earth” was formulated during the pandemic and was also shot during the same period. Directed by Justin Benson and Aaron Moorhead, the film qualifies as a sci-fi horror, though its underlying dark humor is its strong point. The concept of two strangers trapped in an apartment where a supernatural phenomenon is taking place, accompanied by a strong atmosphere, is certainly an attractive tone, but at some point, the movie becomes too strange for my taste. It was quite intriguing when the duo was presenting their theories, but eventually, it turned into a slug, where you kept spinning in an endless loop without coming to any conclusions. The most striking aspect of the film is probably the sense of loneliness that resides within the characters, played by Benson and Moorhead, which I would have loved to explore further. Both have made their choices, but they still long for that human touch, which their lives have been deprived of. So let’s see what this strange journey has in store for us and if there really is a presence of interdimensional aliens or angels inside your apartment.

Plot Summary: What is the movie about?

It had only been a few hours since Levi Danube had moved into his new apartment in Laurel Canyon, Los Angeles, when he saw another man (probably the only one in the neighborhood) smoking downstairs. Levi had run out of cigarettes, so he decided to borrow one from the stranger. The stranger named John Daniels had lived in those apartments for more than a decade. He said that he was a wedding photographer, but to support his income, he taught mathematics in a school. Levi worked as a bartender and had planned to move from Los Angeles. John told Levi that he could take the furniture that his ex-husband had left him, which he was going to donate anyway. John helped Levi move furniture and other things and the duo witnessed the low-flying planes and the smoke billowing from the buildings with a kind of nonchalance, as if they knew the apocalypse was no longer a possibility. crazy. A quartz crystal, which Levi was using as an ashtray, began to float in the air as John was about to leave. They both didn’t realize what was happening, and stood frozen in amazement. The incident left them puzzled and they could not understand what could have caused such levitation. It suddenly occurred to them that if they documented it, they could sell it to Netflix or some other OTT platform and make a good amount of money in return. They started daydreaming about how much money they would make if the OTT giant decided to broadcast their documentary and the opulent lifestyle they could lead after that. They brought whatever apparatus they had and set it up to record the anomaly on camera. The closet in Levi’s apartment was emitting light and the duo didn’t know how it happened or where it came from. With their amateur setup, they couldn’t record anything, and Levi was of the opinion that they needed more sophisticated cameras and recording devices. Levi had told John that he did some volunteering at a youth shelter, but the latter soon realized that it was a mandatory service that he did because he was on probation. John also found out that he had been convicted of some sexual offences, though Levi told him that it had all been a huge misunderstanding. John had all sorts of theories in his mind, and he took on the role of lead investigator while Levi played second fiddle, not because he wanted to, but because John was a know-it-all who had no room for a second opinion.

‘Something On Earth’ Ending Explained: Did John Get Any Real Evidence To Prove His Theories? Is Levi alive or dead?

The duo would brainstorm, and after a while, it seemed like they were high on hallucinogens or in a trance-like state, as their theories were even stranger than the anomaly occurring inside the apartment. The line between reality and imagination became completely blurred. John felt as if he had seen the pattern the light made, after it was reflected from the glass, somewhere in the past. He realized that it was the same pattern that he had seen in his geometry book, which he had had in his possession since childhood. There were also other outlandish theories that the duo formulated. They speculated that it might be possible that the aliens wanted to contact them. According to John, there were theories that aliens had planted life on earth and were waiting for the day when humanity became so socially evolved that they could contact them. John considered the possibility that the extraterrestrial beings might have seen how evolved he was, and that’s why they were trying to make contact. Although John may not have been able to find evidence of the presence of aliens, he did show that he considered himself far superior to others. The quartz deposits and leaky roofs made John feel like Levi’s apartment could be a gateway to a distant planet. Levi discovered that the cactus plant inside his apartment was surprisingly bearing a fruit that apparently had Morse code hidden inside. John discovered that morse codes were basically the coordinates of a place. Although they found nothing there, Levi saw a fence where the beach looked exactly like the one where he used to go fishing. He wasn’t about to believe that it was just a lucky coincidence. They also found a recording device under the apartment, in a hollow cavity, with the number 1908 written on it. The same numbers were tattooed on Levi’s knuckles. Although Levi told John that it was the number of days he had spent in a mental institution during his childhood, John couldn’t deny the fact that there was some connection between the number and the strange occurrences in the apartment.

The movie “Something on Earth” enters a meta space as the editors of the documentary Levi and John were filming tell us about their experiences and what they thought about the whole supernatural thing. The VFX artist, who humorously goes by an alias of Robert F, says that he has recreated some of the footage because the originals were destroyed. They had told him to keep it a secret and pretend that John had never contacted him. Every day the magnitude of the earthquake and the number of levitating objects increased. At the end of the movie, “Something on Earth”, we see that even John started to float in the room, while Levi, who was sitting on the balcony and enjoying a cigarette, was probably levitating in the night sky. John went ahead and made the documentary, and maybe he just did it in a pretentious way, but he paid tribute to Levi and recognized that he too was an integral part of the project. John never encountered the Pythagorean Brotherhood or any Greek cult society, although he had high hopes that one day he would prove that they or other extraterrestrial beings were trying to make contact. His theory that there was radiation was also overturned, although how the weight fluctuations happened was never explained in the film. The film also does not explain how the guitar notes played by Levi mysteriously repeated themselves and whether they corresponded to the movement of the stars as John speculated.

John was shown to be a compulsive liar, and many times, Levi caught him in the act or eventually learned that his stories were mostly made up. It’s quite possible that supernatural events were simply a figment of the imagination of people who probably really enjoyed being conspiracy theorists. According to what John says in his documentary, Levi died, although his story seems literally implausible. Levi had been responsible for the death of his sister, who had jumped off a building, and maybe killed herself because she couldn’t handle the pain anymore. John had probably created an imaginary story, or maybe he was actually telling the truth. Perhaps, just because John believed that his entire life he was destined to run into something supernatural or inexplicable (which he refers to as the Jerusalem Syndrome), he created all this in his mind and gave himself a reason to believe that everything happened in reality. The movie, “Something on Earth,” in the end, like John and Levi’s bizarre theories, could be called an abstract mess that could be tweaked into whatever you want it to be.

“Something on Earth” is a 2022 drama thriller film directed by Justin Benson and Aaron Moorhead.