COLUMBUS, OHIO – The mandatory postgame handshake complete, Marcus Freeman turned and began jogging off the turf inside Ohio Stadium on Saturday night after losing a game.

Freeman, a former Buckeyes star, has risen to even greater heights in the coaching ranks to make his regular-season debut in the only guaranteed top-five matchup of the season.

And Freeman, who had shared a heartwarming pregame hug with OSU athletic director Gene Smith, another of this game’s common threads with Smith’s background as a Notre Dame alumnus, had just seen his Fighting Irish, ranked fifth, perched on the precipice of a momentous upheaval; the Irish had the ball and the opportunity to take the lead in the fourth quarter.

With a first-time starting quarterback, a missing preseason All-America selection at left guard, and seven new assistant coaches, not to mention new specialists, Freeman’s Irish had led the host Buckeyes with scores of 3-0 and 10-7. – for about 32 minutes of playing time.

Is not sufficient. Those were some of the first words from the first-year head coach after his first regular-season game as head coach.

Not emotional; analytical. Not downcast; certain.

“And that’s what I just told you. You can’t be surprised when all of a sudden it’s a 10-7 ballgame midway through the third quarter against a good, very, very good football team. Do not get surprised.

The Irish, frankly, were never surprised. They seemed, at times, an extra stop on the third down or just a second-half touchdown to turn college football around in its first full weekend.

Tyler Buchner wasn’t perfect, but neither he nor his offensive teammates had a single turnover. The offensive line, even without the aforementioned Jarrett Patterson, prevailed throughout the first half and gave up just three sacks to a Buckeyes defense peppered with pro prospects. 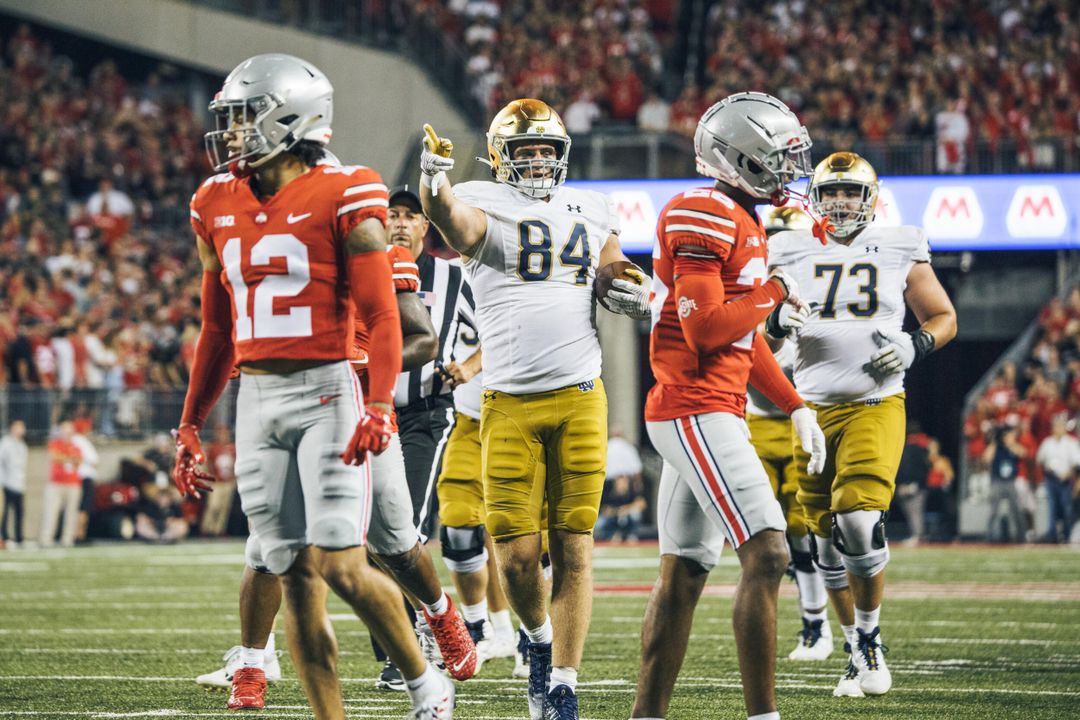 The defense of Notre Dame? He set the tone, aggressively, drawing a pair of early penalties, with a flurry of hits that sent messages to the Buckeyes, including a hard throw from Brandon Joseph that ultimately dislodged Ohio State star receiver Jaxon Smith-Njigba from the game in its initial moments.

But when the Buckeyes converted four of their last six third-down attempts, the Irish offered a quick postgame self-assessment that showed no disappointment.

“Something happened,” Notre Dame linebacker Jack Kiser said, “and we just weren’t executing at the level we wanted at the end of the game. And in a great game against a really good opponent, you have to find ways to build momentum and make sure you make those plays and execute them at the level that we have.

The Buckeyes, who had allotted Notre Dame just over 5,000 tickets for this event, had overwhelming support from the crowd of 106,594, much of it dressed in scarlet, on a day when OSU officials had said they hoped to break records for the most people in attendance and on their campus. 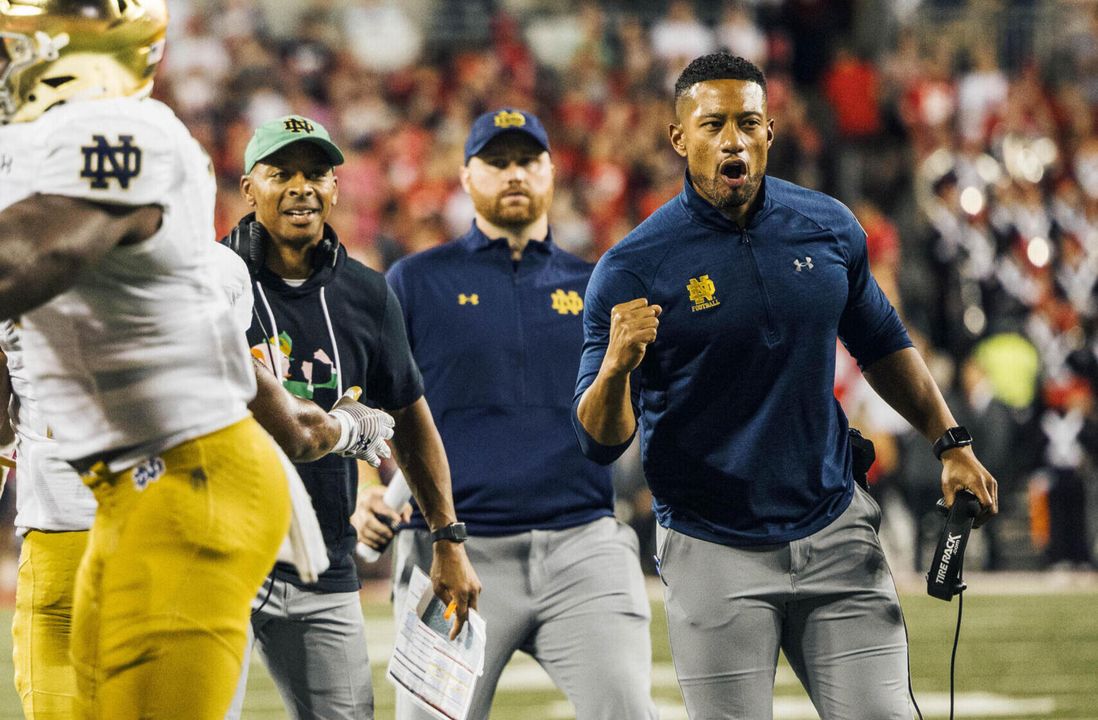 People had camped out for ESPN’s Gameday show when the gates opened at 5 a.m., and intermittent showers throughout the afternoon and evening did little to quell the excitement for the seventh all-time meeting between these two powers.

In other words, there were external and internal factors that affected Notre Dame’s execution.

However, it was never for lack of effort. It was not for lack of instruction. Notre Dame has been among the elite and most consistent programs in college football for the past five years; Freeman has emphatically attacked this work for the past nine months because he believes there is more to it.

That, above all, was Freeman’s message that night. To himself. To the players of him.

“It is not the result that we came here; there is no such thing as a moral victory,” Freeman emphasized.

“That should be the expectation for this group,” Freeman said of being in every game, having the edge late and being positioned for victory. “Now we have to learn to finish. Do not stop. I felt that a little bit in me as a coach [saying to himself] ‘I just have to suck it up, it’s 10-7 midway through the third (fourth).’

“We have to keep attacking and keep executing. And that’s what we have to do better.” 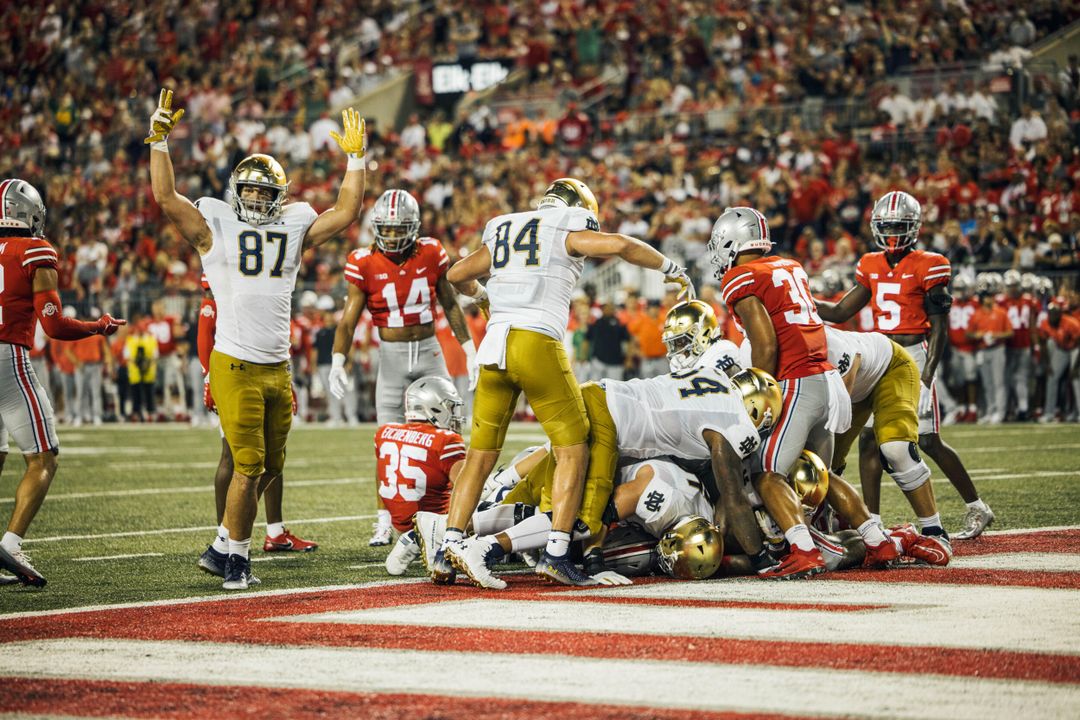 There is no reason not to expect an improvement. Tommy Rees’ offenses have improved year over year, month over month and regularly from game to game.

And Freeman, with a previous track record as an elite defensive coordinator, has never accepted anything less than a quest for continuous improvement.

It may not officially be a principle of Freeman’s ‘The Golden Standard’, but it is imperative.

“They fought the whole game,” Freeman said. “And I want to make sure I say that. We didn’t run late in the game when we had to. We didn’t execute the way we needed to. We had a challenge to win the fourth quarter. We didn’t win the last quarter. They scored with 13 seconds left in the third and they scored late in the fourth, and we didn’t respond. …

“We have to be able to finish and execute in the fourth quarter.”

Moments before that news conference, a couple of Freeman’s former Buckeyes teammates had tried to stop him for a quick hug as he jogged off the field. The Notre Dame coach was neither rude nor in the mood for such a social element.

Soon, he would be done with this game, and Freeman had already turned his attention to helping Notre Dame close this chapter and move on to the next.