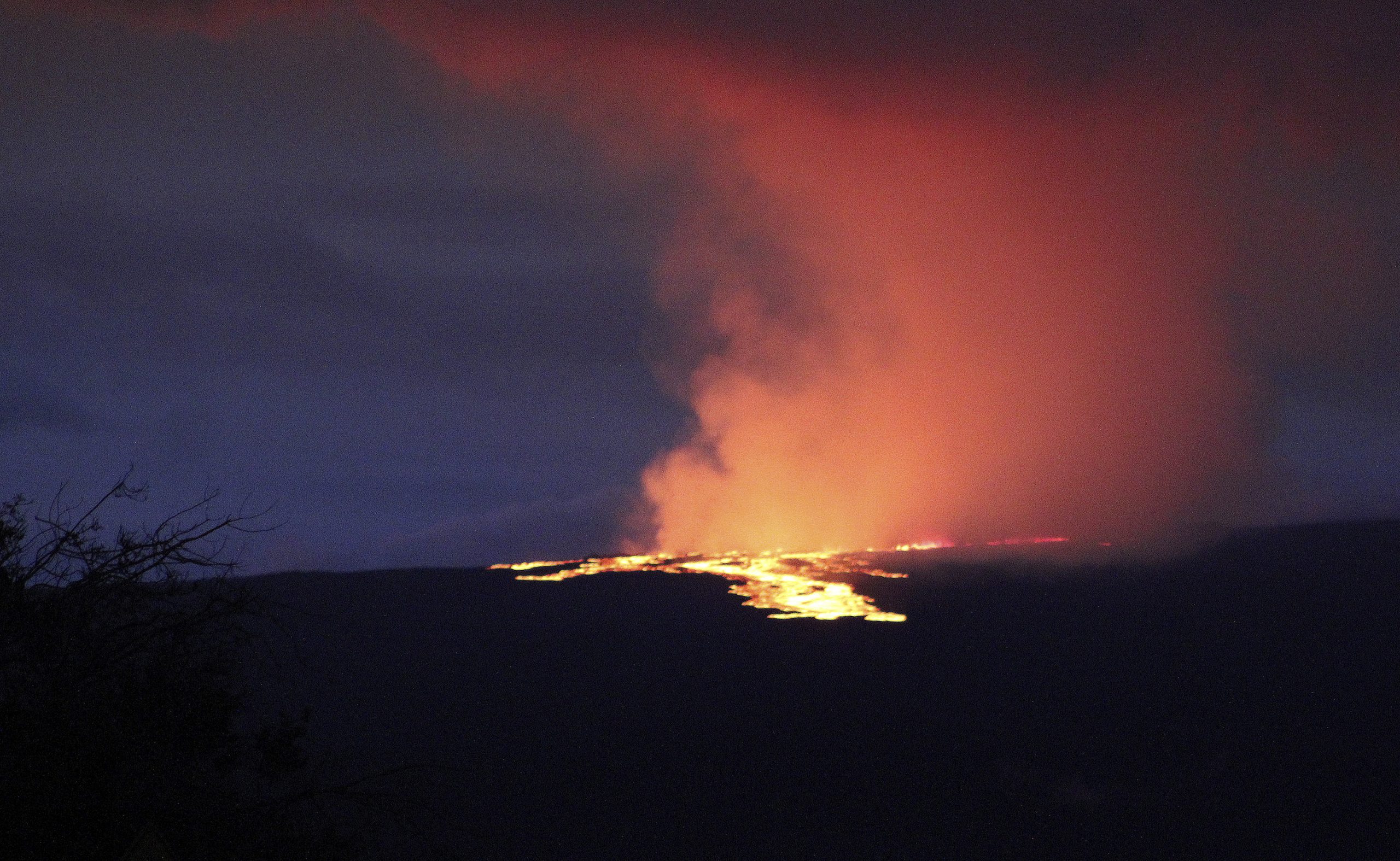 Lava from Mauna Loa’s eruption appeared to have moved away from homes in the southwestern part of the volcano on Monday, offering at least temporary relief to homeowners in Hawaiian Ocean View Estates and other areas most at risk. But the new eruption reopens old questions about where development should be allowed and under what conditions.

Hawaii County is still in the process of purchasing properties affected by the latest devastating eruption of the Kilauea volcano, which destroyed more than 700 homes in the Leilani Estates and Kapoho areas in 2018.

Before that disaster, flows from Kilauea destroyed Kalapana in 1990, and before that was the loss of the village of Kapoho in 1960. This is not a new problem.

Sunday marked the first eruption of the Mauna Loa volcano since 1984, but county officials are once again faced with a situation where lava could threaten homes that have sprung up over the years in what is known as Lava Zone 1. Those are the most risky areas that are hit in the volcanic rift zones.

There has been talk of banning development in the highest risk lava zones in the past, but that talk never translated into much action. People still buy and sell land in the riskiest areas, and landowners can still get county building permits to build homes there.

And this problem is largely created by the county itself. State and county officials authorized subdivisions of many thousands of lots in many of those risk areas 50 or 60 years ago, and those subdivisions now offer some of the most affordable land and housing in the state.

Hawaii County Mayor Mitch Roth said Monday that he has mixed feelings about the idea of ​​restricting or blocking development on lands most at risk of eruptions.

“In this position, you have a duty to everyone in the county,” he said.

Of the large subdivisions, he said: “In hindsight, it’s always 20-20. Should they have allowed what they did in Puna, when they did? No. But now people have property. They own things because the county has given them this opportunity. And so, there are mixed feelings.”

“There are some people that that’s their part of the American dream, so it’s hard to separate all these facts. Do you want to be the person who steals someone’s American Dream, what they’ve earned? Roth added, “Like many things in this job, it’s not just a simple yes or no.”

But the county’s longstanding policy of allowing development in high-risk areas, and even helping it by rebuilding roads in high-risk areas after the roads have been destroyed by floodwaters, has critics. Bobby Camara, who was born and raised on the Big Island and studied the history of local eruptions, is one.

“This is just stupid. We know what the dangers are. People shouldn’t be building down there, and as I’ve pointed out repeatedly in the past, every eruption and lava flow that happens creates more and more costs for the citizenry, because there’s more and more development,” he said.

“I understand it’s a really difficult problem, but there has to be a way to stop it, just kind of ‘enter at your own risk,’” he said. Eruptions “are not something that happens every 500 years.”

Camara, an outspoken author and blogger, has approached a variety of county officials over the years to urge them to stop allowing development in the highest-risk areas classified as Zone 1. He has not been successful, he said. .

“As a taxpayer, my question is, why do I have to pay for the stupid arrogance of others? You shouldn’t have to pay for that. You have to build a house where you want to, understand the dangers in the neighborhood and face them,” she said.

He also wants reassurances that people who insist on staying in high-risk areas understand that the government will not bail them out later. That would apply, for example, to people who refuse to sell their properties under the county’s current program that buys out from homeowners and landowners who were affected by the 2018 eruption.

That program is funded by about $107 million in federal funds from the Department of Housing and Urban Development, and is designed to prevent affected land from being affected again by future eruptions. The land the county is purchasing will be maintained as open space, according to the project’s website.

Under that program, the county pays up to $230,000 for homes affected by the 2018 eruption, including homes that were destroyed or isolated by lava, and final prices are based on pre-flow appraised property values. The county will pay up to $22,000 for virgin land that was affected by the eruption under the same program.

A total of 820 owners have applied to purchase and 85 properties have closed to date at a total cost of nearly $15.8 million. Roth said that process is creating a “chessboard” of land the county holds as open space, interspersed with private lots that can still be developed for new housing.

Ashley Kierkiewicz, a Hawaii county council member and chair of the council’s planning committee, said some former residents are refusing to sell the county because they want to rebuild. Kierkiewicz represents Lower Puna, which includes Leilani Estates and several other areas at high risk of lava flooding.

“People lost everything, and this is a way to help them recover,” he said.

“We have to start taking a hard look at what our policy is going to be, because we know this can happen again in our lifetimes, so we need to start having that conversation,” he said. “We have sea level rise, we have climate change, we have lava. We have to start thinking about these policies and programs within the county.”

“People are still moving, I see license plates from Vermont and Texas and all over the place,” he said. “This is seen as the last affordable Mecca, the island of Hawaii in particular.”

Kierkiewicz said he has reached out to Roth’s administration to try to assemble a core group that will begin working on those issues as the County Council prepares to update the county’s general plan. The general plan is supposed to guide development in the county.

She suggested that the county could relax the building code a bit or encourage the use of modular homes that can be more easily moved.

“We have to explore everything,” he said.

But she doesn’t think the county can simply ban new construction or refuse to issue building permits in the highest-risk areas.

“Where are these people going to go?” she said.

That idea was discussed during the administration of former mayor Harry Kim, but “I don’t think it’s going to happen.”

Subscribe to our FREE morning newsletter and face each day more informed.