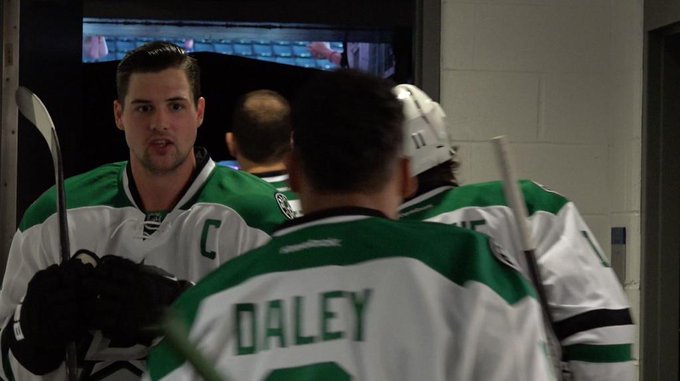 Reviewing the past and looking to the future is the only thing you can do since there are no hockey games in the present. The Dallas Stars are preparing for the new season, so fans will be in the summer without hockey. Revisiting old Stars memories is a good way to pass the time. We’ve covered the best and worst moments in team history for the past two weeks, but all of those were in the playoffs. All-Star fans saw some crazy games in the regular season and we can’t cover them all, but we can take a look at some memorable and forgotten ones.

Hockey fans went through an entire season in 2004-2005 without the NHL. The lockout lasted a full season and with its return came a whole new sport. The Stars started the new season strong on opening night against the LA Kings. The Kings started their season fast with a 4-0 lead after the first period. The Stars won 5-4 in regulation on goals from names you haven’t heard in a while. Sergei Zubov, Jason Arnott, Sean Avery, Jeremy Roenick, Bill Guerin, Dustin Brown and Phillipe Boucher were the scorers for both sides in this game.

Less than a month after the previous game it was one of those blowouts you have to remember. 8 is great, especially after 2 periods when the Stars lead 8-1 thanks to a Stu Barnes 3-pointer. The consternation with the Blackhawks wasn’t there yet, but that 9-1 is still a fond memory.

Double digits are always nice, especially in front of the home crowd. I wouldn’t expect this final scoreline with a 4-2 lead after 2 periods, but the wheels soon fell off for NYR. A 6-goal third period made the score 10-2, as the last time the Stars scored a ten was on February 6, 2009. How could the New York Rangers leave Steve Valiguette in goal for the 10-goal? ? What is another curious fact is that no Stars player got a hat-trick.

All-Star fans had longed for just one playoff team between 2009 and 2014. 6 straight seasons of missing the playoffs had taken its toll on a franchise where hope began to turn bleak. The year finally came and this game in particular was the one that gave them the last team as the eighth seed. Not to mention this was after the emotional game in the next paragraph.

The dates from March 8, 2014 to March 11, 2014 have to be some of the most chaotic, potentially catastrophic and euphoric in team history. 48 hours before the “game,” Mike Modano was having his jersey retirement ceremony along with the impromptu debut of Boston Bruins legend Tim Thomas with his colored cliche pads.

The game against the Columbus Blue Jackets started like any other, but then it became almost a tragedy. Rich Peverley of the Stars collapsed on the bench after finishing his shift. His medical condition meant that an extreme emergency was taking place.

Those brief moments in the game are some of the most harrowing in any sport. Peverley had a huge “Cardiac Event” that still sends shivers down the spine of any Stars fan who remembers it. Fortunately, he is fine now.

That last shift was the end of Peverley’s career. Obviously the players on the bench were extremely disturbed and the game was suspended until a later date. After all that, the Stars still had another game less than 24 hours later. Jamie Benn scored perhaps the most electrifying non-essential regular-season goal in franchise history with the overtime win at St. Louis. After all that excitement in 3 days, watching Benn bury the overtime winner in St. Louis showed what Stars hockey is all about.

The history of the Dallas Stars now surpasses the 2,000-game mark since 1993. TI has some great moments, along with some not-so-great ones. Star fans have been through it all. Good regular season games pave the way to the best playoff games. There will be another “big moment”, when the Stanley Cup is once again hoisted over the victory green.