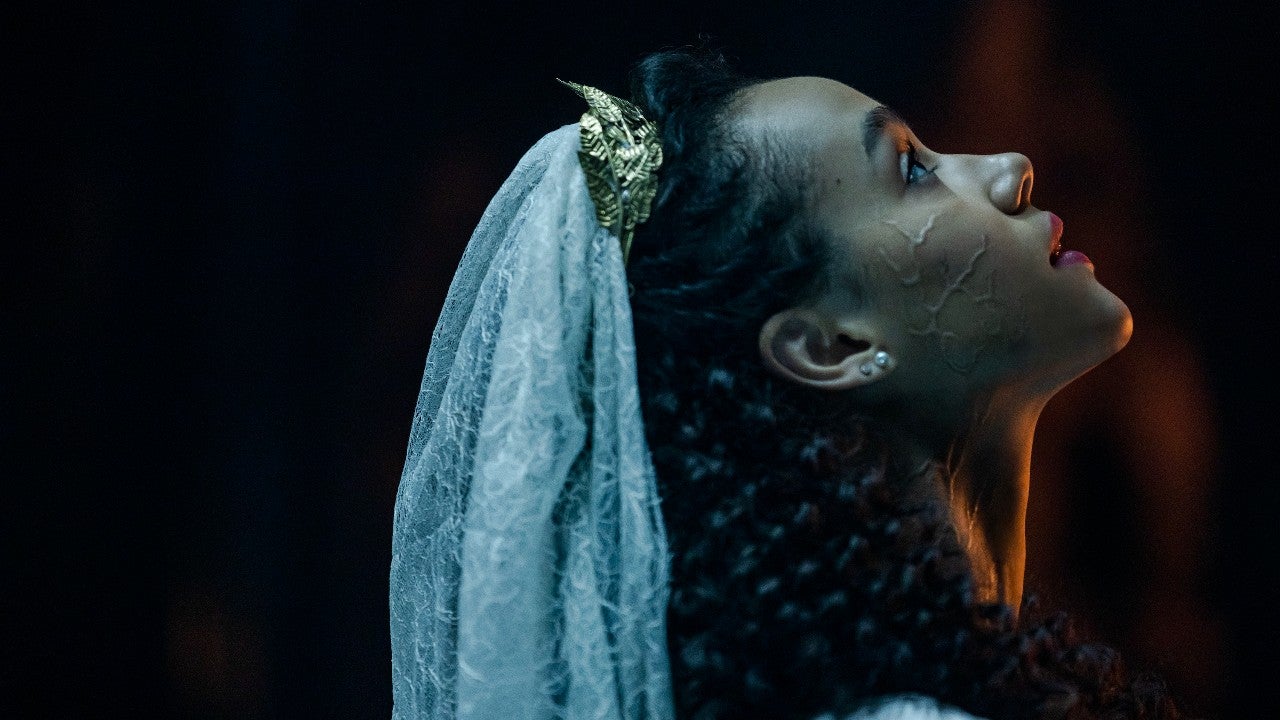 ‘The Invitation (2022)’ is a fantasy horror film directed by Jessica M. Thompson and written by Blair Butler. It stars Nathalie Emmanuel, Thomas Doherty, Hugh Skinner, Stephanie Corneliussen, Alana Boden, and Sean Pertwee. Initially it looked like an imitation of ‘Salt‘, soon incorporates a horror icon and turns into a most entertaining film that pays homage to a series of films belonging to the genre. His brilliant appearance and some obvious elements in his script act as glaring problems, but Thompson has made a film that uses the racism angle more intelligently by dealing with the conflict between genetic history and cultural history.

A woman living in a desolate room in a large English mansion refuses to eat, something she has been doing for some time. When the butler forces her to do so, she escapes from it in a violent fury with what appears to be superhuman speed and power. After hiding from those who are looking for her, she hangs herself with a piano wire which decapitates her.

In New York, Evie is an aspiring artist who was recently orphaned and practices ceramics. While waitressing for an anniversary party for a genetic research company, her friend Grace gives her a bag of goodies that includes a DNA kit. Curious about her ancestry, she uses the DNA kit and, on the company’s website, she opts to allow her relatives to contact her if they can trace any of her. She soon receives a message from Oliver Alexander, her aristocratic cousin from England, wanting to meet her on an upcoming trip to New York.

At the meeting, Oliver seems grateful for their relationship. He tells her about her connection and invites her to this big wedding in Yorkshire, where her cousin is marrying into an extraordinarily wealthy family. Evie agrees, realizing this is a once-in-a-lifetime opportunity for her.

After convincing her friend, Grace, to keep her up to date on what will happen at the wedding, she arrives in England. New Carfax Abbey, the home of the DeVilles, is an old gothic mansion. The place is presided over by Walter DeVille, the young lord. It’s a magical destination wedding for Evie, who is lovingly welcomed into the Alexander family as Walter fawns over her as they realize their mutual attraction to each other.

However, Viktoria, one of the bridesmaids, is strangely confrontational and insulting towards Evie, while the other bridesmaid, Lucy, is a meek and nice girl to her while Viktoria bosses her around. Soon, the maids begin to disappear when they are killed by a shadowy figure. Evie dreams of the woman we saw at the beginning of the film. Finally, after they have sex, Walter asks Evie to marry him, and she jokingly agrees. It turns out that pretty soon, it was anything but a joke to him and the dream soon turns into a nightmare as she realizes what she has unknowingly gotten herself into.

What is Evie’s connection to the Alexanders?

On their first meeting, Oliver tells Evie that his great-grandmother, a rebellious young woman named Emmaline, had a scandalous and secret affair with a black footman when she was already engaged. She gave birth to a baby, who is Evie’s grandfather, after which the footman left the village and raised him on his own. Emmaline managed to keep her affair a secret even from her husband.

Today, the Alexanders are excited about this chapter in their story and brimming with joy at having discovered a part of their family in America. It’s made even more special by the fact that the family seemed to produce only sons, and thus Evie’s discovery comes as a relief to the patriarch, her and Oliver’s great-uncle Alfred.

Who really is Walter DeVille?

Although it is never specified exactly what Walter really is, it is pretty clear that he is a vampire. He drinks blood, he is centuries old, and yet he looks barely a day older than thirty. His house is called New Carfax Abbey, which is a reference to Carfax, the estate that Dracula bought for his residence in England in Bram Stoker’s novel of the same name. His last name, DeVille, is a homophone of the word ‘devil’. New Carfax is located in Whitby, the place where Stoker conceived the idea for the character and the seminal novel. The Demeter, a Russian ship that brought Count Dracula to England, ended his final voyage in Whitby, also making it the first place he set foot in England.

All of this information culminates in Walter telling Evie that in Wallachia, a region of Romania, they called him ‘The Son of the Dragon’, which is what the name ‘Dracula’ means in Romanian, while ‘Dracul’ means ‘devil’. . Interestingly, his last name ‘DeVille’ is a homophone for ‘devil’. He also claims that in his ‘old country’, probably Romania, they also called him ‘Nosferatu’, which is another word for vampire and was the name of the seminal 1922 horror movie that plagiarized his story entirely from the novel. by Bram Stoker. So it is possible that Walter is not just any vampire, but Count Dracula himself.

What purpose did Evie have at the wedding?

The three families who serve Walter, namely the Billingtons, the Klopstocks, and the Alexanders, do so by providing him with wives. The wives are a transaction in exchange for which Walter provides the three families with wealth and status for eternity, making them dependent on him for his prosperity. Walter seems to have a fairly time-honored notion of the number three, again recalling the novel, ‘Dracula’, and the importance of the number there.

Lucy is a Billington, Viktoria is a Klopstock, and Emmaline was an Alexander. Emmaline was going to marry Walter when he had her affair with Evie’s great-grandfather. Walter’s wives drink his blood at their wedding to gain his qualities such as immortality, a glacial aging rate, extreme strength, and speed. It turns out that Viktoria had been married to Walter for 500 years and Lucy – for 100. In the event of Walter’s death, they lose the powers they got from him.

Emmaline, characterized as a rebel, opposed Walter’s practices from the beginning and eventually committed suicide after growing tired of the life she was forced to lead.

Emmaline’s death jeopardized Walter’s relationship with the Alexanders, who then jumped at the chance to cast Evie as their own grandmother’s replacement, as his wife, after she was found out through Evie’s attempt to find out about her. ancestry. To make sure this calamity doesn’t happen to them, the Alexanders sent Oliver to take Evie to the wedding.

At the wedding, Evie agrees to marry Walter and realizes that then she can gain his powers, which is the only way she can overpower her captors. Once that happens, she sets the altar on fire, she stabs Walter in the heart instantly, ages him though she doesn’t kill him, and escapes with the maid, Dea.

When Viktoria confronts her, Lucy comes to Evie’s defense, having grown tired of her domineering attitude. In the ensuing fight between Lucy and Viktoria, the former impales both of them and thus commits suicide. Following this, Evie kills Mr. Fields, Walter’s racist butler who admits to killing Evie’s great-grandfather, after learning of his affair with Emmaline. When an elderly Walter arrives to kill Evie, she throws him into the fire that he had started at the altar and was now spreading through her house. This makes her avenge the death of her grandparents.

As a consequence of Walter’s death, Evie is no longer a vampire but a normal human being again. In the epilogue, Evie and Grace wait for Oliver near his office so they can kill him as revenge for what he put Evie through.

Read more: Here’s where to watch and stream the new horror movie ‘The Invitation’ online

Where to watch The Invitation