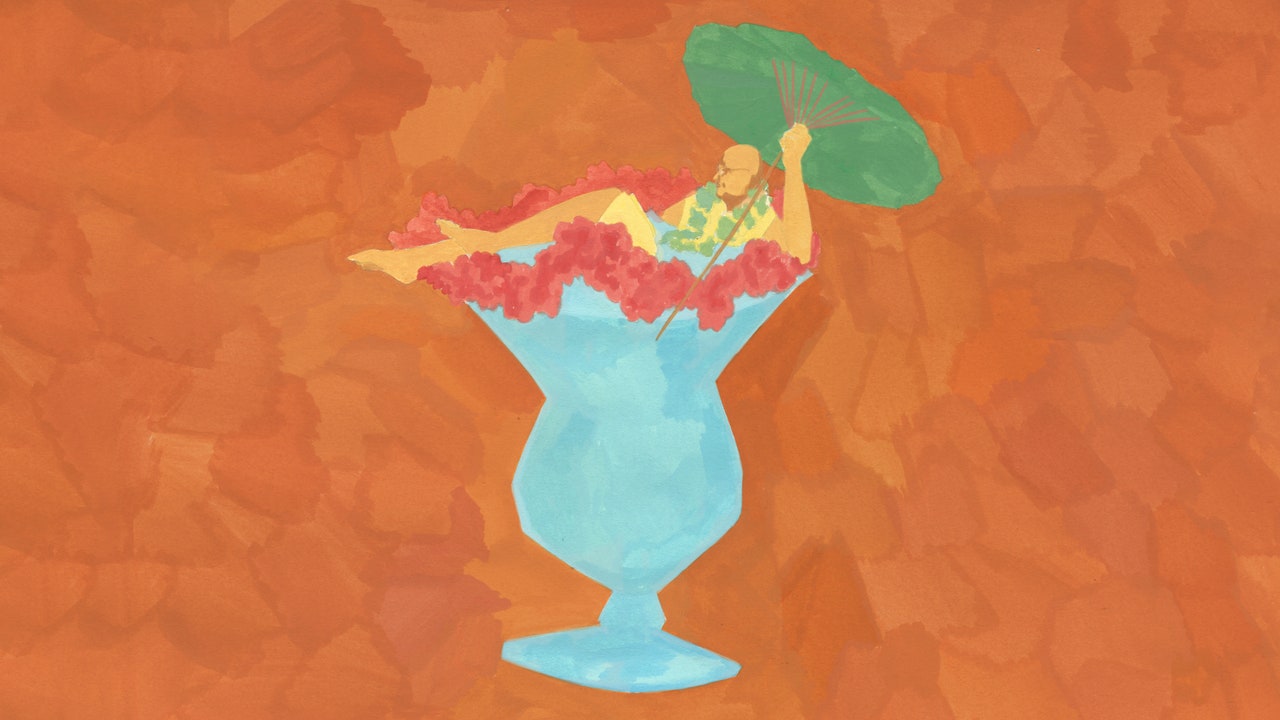 A successful tropical cocktail can have a million mothers. Take the mai thai. Vic Bergeron, the Vic of Trader Vic’s, the kitschy restaurant chain that helped popularize an imaginary interpretation of Polynesian culture for brooding mainlanders, claimed he invented the rum drink. Any suggestion to the contrary, Bergeron said, aggravated his ulcer, adding: “Anyone who says I didn’t create this drink is a dirty stinker.” On the opposite side, we have tiki-bar progenitor Don the Beachcomber, whose birth name was Ernest Gantt, but he was so enamored with his Don the Beachcomber persona that he legally changed his name to Donn Beach. Beach claimed that the mai tai was his brainstorm. We may never really know who to thank/blame for the mai tai, especially since recipes can’t be copyrighted and back in the mid-forties when it first appeared on bar menus there was such a rage for anything that signaled the fantasy version of island culture (including cocktail glasses emblazoned with sacred cultural symbols) that bartenders the world over were probably downing rum, lime, and coconut to catch the wave.

On the other hand, it is an indisputable fact that, in 1957, Harry Yee (1918-2022) created Blue Hawaii (rum, vodka, blue curaçao, pineapple juice and sweet and sour mix). Yee ran a bar in the Hawaiian Village, which was larger than most hotels in the United States outside of Las Vegas. Hawaiian Village, which had started as a small collection of low-rise tourist cabins, had been expanding to accommodate the new wave of tourism that was underway. At the time, it could still be difficult to get to Hawaii, but Americans were determined to see the paradise that servicemen returning from the South Pacific had raved about, and they wanted sweet, sensual cocktails to wash the experience down.

Yee’s parents were from China and he was born and raised in Honolulu. He was small and bespectacled and had a shy smile. His father owned a general store in downtown Honolulu. After high school, Yee attended aviation school in San Francisco and later served as a fighter pilot in the Chinese Air Force, under the command of Chiang Kai-shek, during World War II. He returned to Honolulu after the war and for a few years worked in his family’s store. He also started helping out a friend who ran a bar that was popular with the military, and he just never stopped. It was an interesting choice of contrary professions for someone who drank very little, and then only brandy, but Yee took it immediately. His style was more businesslike than schmoozy. “He wasn’t the jovial guy with jokes behind the bar,” said Rick Carroll, a former Honolulu reporter. Advertiser, who wrote about Yee in 1984, said. “He was enthusiastic and bright, but serious. I never heard him laugh.” After his stint at his friend’s bar, Yee spent a few years at Trader Vic’s, where he learned how to mix tropical drinks, layering multiple spirits, liqueurs and juices. He then went to the Hawaiian Village, which, in addition to being huge, was glamorous; celebrities dined there regularly.

Unlike, say, a bar in New York City, where a dry Martini could satisfy patrons until the end of time, bars in Hawaii, especially in the late 1950s, were besieged by tourists who wanted novelty drinks and “Hawaiian” (a Hawaiian style). prima facie fallacy, because the indigenous peoples of the South Pacific did not consume much alcohol). Yee recalled being regularly asked for a local cocktail, which did not exist. She filled the void with mai tais, telling a reporter: “We served them as fast as we could.” At the time, the Dutch spirits company Bols was promoting Blue Curaçao, its orange liqueur, and the local Bols representative urged Yee to see if he could find something tasty using it. Voila, the Blue Hawaii. (Contrary to the common assumption that the drink was named after the Elvis Presley movie, Yee evidently took its name from a 1937 Bing Crosby film, “Waikiki Wedding,” which includes the original version of the song “Blue Hawaii.” “.) The drink was a hit Inspired, Yee invented nearly twenty more cocktails, including the Tapa Punch, Chimp in Orbit, Tropical Itch, Hawaiian Eye, Naughty Hula, Scratch Me Lani, Wahine’s Delight, and Hot Buttered Okolehao.

The usual garnish for these sugary drinks was a sugarcane stalk, but Yee’s daughter Marilyn told me her father was distressed by how messy and sticky it was, especially since bar patrons were in the habit of putting the Chewed sugar cane in ashtrays. Her first inspiration to up her garnish game was to garnish her cocktails with a vanda orchid. People loved her. For her Tropical Itch, she got fourteen inch long bamboo back scratchers and stuck one in each drink, thus a garnish/souvenir. (For the record, a bartender in Puerto Rico claimed that she started wearing back scratchers at a similar cocktail party around the same time.) Yee also began decorating some of her cocktails with small paper umbrellas, a novelty item introduced to the United States. United States in 1893, with the Chinese people at the World’s Columbian Exposition, in Chicago. (According to Imbibe Magazine, miniature parasols were the focus of a miniature controversy: they were the subject of a court case in the 1890s arguing whether they should be subject to the same import duties as real parasols, even though they were about three inches tall long and they were done. of toothpicks and tissue paper. The court ruled that they should not be taxed as umbrellas, as they did not seem to work as protection from the rain.) Was Yee the first human being on planet Earth to put a small umbrella in a drink? It’s impossible to tell, but he was celebrated for it and solidified the concept of the umbrella drink in popular culture for all time.

Yee bartended at the Hawaiian Village for decades, retiring in her seventies. She taught at the Bartending Training Institute in Honolulu for several years after that. The rewards for inventing drinks aren’t always lavish (apparently all the Hilton bartender credited with inventing the now-ubiquitous Piña Colada ever got was a medal, a diploma and a television), but Yee was proud of his legacy of alcoholic beverages. “He was a modest person,” Jeff (Beachbum) Berry, who writes about tropical drinks, said recently. “He never imagined that his drinks would still be enjoyed.” Berry paused, adding: “The thing about drinks in Hawaii is that they don’t have to be good. After all, you are in Hawaii, nothing else matters.” ♦