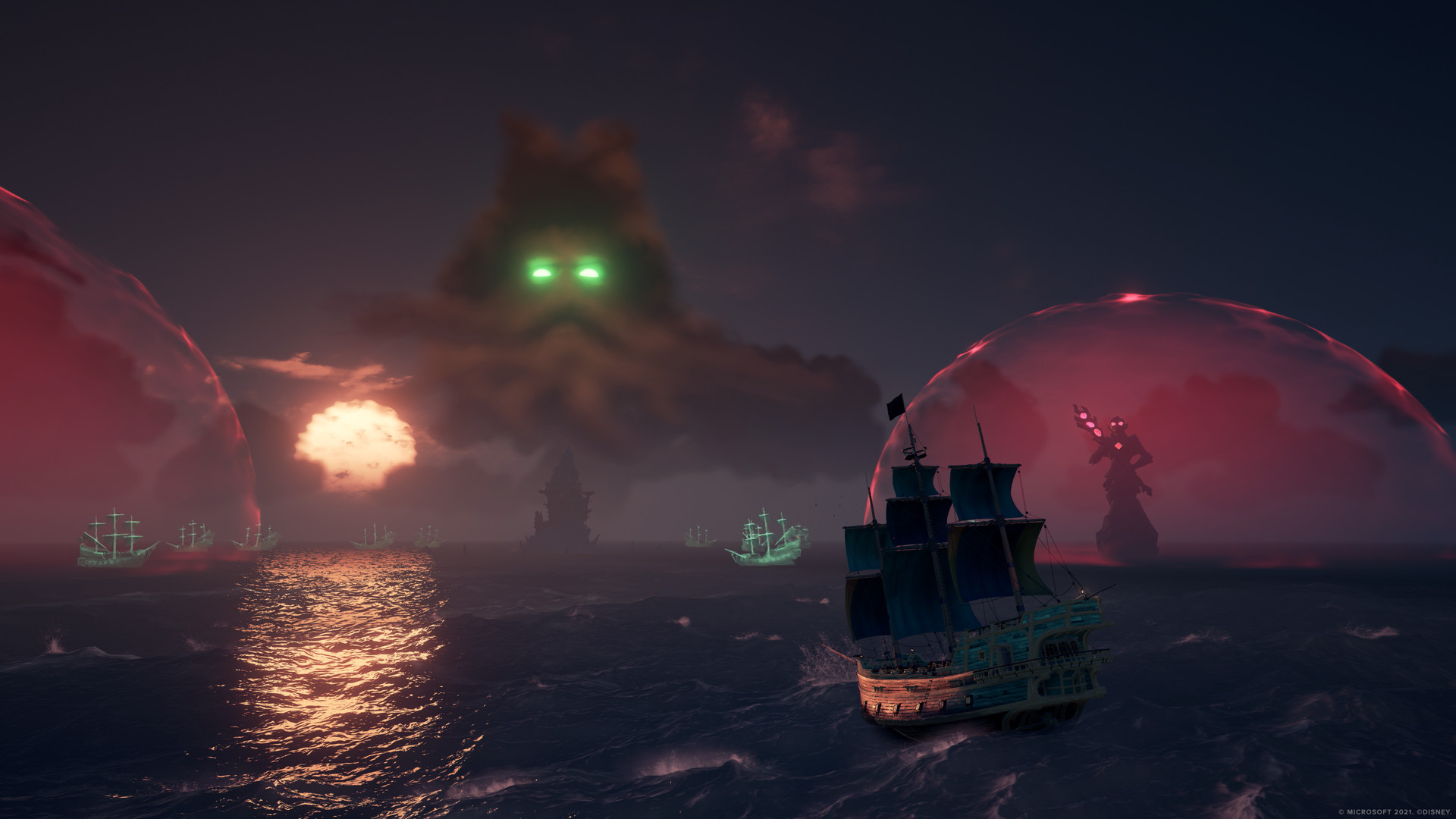 We’re pretty sure almost all of you wanted to be a pirate at one point or another in your life, right? Then you are in luck! Because there are plenty of video games to help you fulfill those fantasies and we can list some of them here!

#15 Lego Pirates of the Caribbean

Let’s start with a more lighthearted adventure, shall we? Because Lego video games have touched all kinds of franchises over the years…for better or worse. And yes, that means they did play Pirates of the Caribbean.

In this swashbuckling Lego adventure, you’ll be able to walk through the main Pirates movies and recreate some of their best battles and scenes in Lego form. You’ll play as Jack Sparrow and company and go on a journey for glory, treasure, fun, and of course, to save the day.

So if you have kids who want to be pirates, this would be a great place to start.

It would be too easy to make a certain kind of joke here…so we won’t.

Age of Booty (no jokes yet) is actually a real-time strategy game of a more…casual nature. Which means the game is meant to be strategic, but not as overwhelming or demanding as other RTS games are. You will be the captain of a pirate ship and you will set sail to sink your enemies, get treasures and loot the towns you come across.

The more you get, the more you can upgrade your ship and crew so they can become even better at the missions and tasks at hand. So, are you ready to set sail and get your loot?

If the name “Sid Meier” rings a bell, it’s probably because he was the guy who made the Civilization series. You know, one of the most popular and expansive RTS franchises out there today? The man knows how to make games.

Thus, in 2005, he participated in Sid Meier’s Pirates! Just like in Civilization, you have all kinds of options on how you can go and live your best pirate life. You can be a terror on the seas, or you can be a privateer in search of riches, you can go to town to try to woo some ladies, and so on.

It doesn’t hold up completely today, but you should still give it a try!

Risen 3 Titan Lords may not seem like a pirate adventure at first, but when you dive in you’ll see all the themes wrapped up in a large-scale story that’s all about you fighting for your soul and the world at the same time.

Because in this game, you are part of a world where the gods of old are gone, the titans are on the rampage, and humanity is trying to find a way to fight back. His own personal life has been “shattered”, so his goal is to get everything back.

A sweeping and twisted adventure awaits you. So go see where it takes you!

#11 Kingdoms of Amalur: Reckoning – The Legend of Dead Kel

Usually we’d put DLC content first on a list, but since this is DLC for a pretty expansive RPG title. Let’s make a change here.

The Legend of Dead Kel is a good sized DLC expansion for Kingdoms of Amalur. In it, the mystery of Dead Kel returns to haunt the people of Amalur, and it’s up to you to go and find the truth and put an end to the madness once and for all!

You’ll team up with some unique personalities to try and uncover the truth, but sometimes the truth… is best left buried… which you could be if you’re not careful…

For those looking for a truly large-scale pirate adventure that doesn’t hold back, Atlas might be what they’re thinking of. Because in this game (from the creators of Ark: Survival Evolved), you will be given your own pirate life to go and do with as you please.

That means you can make your own ship, then go find other players to be your crew, and then set sail for adventure! Oh yes, this is a multiplayer and cross-platform game! You will be able to ally with other players or go directly to war with them.

Conquer islands, get loot, get a fleet of ships to call your own, everything is possible in Atlas.

While many of these games are true pirate adventures, the fact is that many of them don’t allow you to “feel” like you’re actually in command of a pirate ship. But Furious Seas is the exception to that rule. Why is that? Because it is a virtual reality title! Yes, this game is a virtual reality game that will let you personally pilot your pirate ship as you navigate treacherous waters, or go and battle other ships to survive, and more!

There’s a deep singleplayer and multiplayer presence here. Also, they worked really hard to make sure you didn’t get dizzy. So if you have a VR headset, you must go and try it out.

When it comes to running a ship, even one like a pirate ship, it’s not just about one person. Yes, the captain is important, but you need a crew to make it all work. Blackwake is the title that really puts “teamwork” into a pirate adventure.

Because in this multiplayer naval warfare title, you will be in battles that will feature up to 54 players, and each ship can have a crew of up to 13 people! That means there has to be a LOT of coordination and teamwork to stay alive.

There are multiple game modes here and many ways to fight and survive on the high seas, so don’t miss out.

Windward is another type of very unique pirate title. Because you are not necessarily a pirate here, but someone who goes on his own ship journey and will meet pirates along the way.

Long story short, you and your partner (the co-op partner in this case) are going to set sail on a journey that will take you across bodies of water and to various islands. The further you get from your base of operations, the more difficult the challenge will be, but you will also get better rewards.

Add to that, you can go on a quest to help villages grow, fight pirates trying to steal your stuff, and more! All in all, this is going to be an interesting adventure.

Blazing Sails is another game that emphasizes both teamwork and battles. Because in the game, you will play in a variety of modes to try and prove that you are the best pirate crew!

You have modes like “Treasure Hunt” where you can take on another person to try and find a set of treasure chests before they do. Or, you can do a battle royale with other pirate teams to see who can last to the end.

Add to that, your fellow players will help keep your ship afloat in the literal sense. So hop on in and see if your crew comes out on top!

Last time we checked, there aren’t just pirates on Earth, there are pirates in space, and Rebel Galaxy is one of the games that embodies that kind of “swashbuckling space adventure” that people love to do.

To the extent that you will be the captain of a star destroyer and then you will be given free rein to do almost anything you want. Really. If you want to be the greatest pirate in the galaxy, go ahead. If you want to go and save people from other pirates or terrors in space? By all means.

Do you want to build your own fleet so that no one can oppose you? Do it! The universe is a very big place, so go see what it has to offer.

Oh yeah, now we’re going back in time for one of the best adventures ever! The Monkey Island series was an adventure story where you would play as Guybrush Threepwood. A charming but unlucky fool who wants to become the best pirate and win the heart of a certain governor.

The games would focus on Monkey Island (obviously) and all the threats and secrets it happened to caress. These games were meant to be “player friendly”, but that was part of the fun, as it meant you could enjoy the game more.

The best part is that a new installment in the series was recently announced! All the more reason for you to jump in and have some good old fashioned fun!

Assassin’s Creed IV Black Flag arguably came at the best time for the franchise. Because by this time, the main story of the games had gotten… well… let’s just say a little complicated and no one was really sure where things would go from there.

As a result, Assassin’s Creed IV Black Flag focused more on gameplay and environment than anything else, and it worked. Fans loved the naval combat elements and the swashbuckling feel of the world. So much so that future games tried to incorporate various Black Flag elements to keep fans happy.

While we’ll never get a real Black Flag 2, at least we’ve got this one.

Sea of ​​Thieves is arguably the best true pirate game out there right now. Mainly because Rare is constantly updating things to make it one of the best pirate games that you can play alone or with a friend.

Just like other pirate games we’ve talked about, Sea of ​​Thieves puts you in the role of a new pirate in a world full of them through other players. Your goal is to do whatever you want to become the greatest pirate of all time.

Fight, loot, search for treasures, swim in the oceans to see what you find, the adventure is there! There’s even some Pirates of the Caribbean content if you want.

Pillars of Eternity II: Deadfire, the sequel to possibly one of the best RPG adventures ever created, takes things to a whole new level…while making you feel like a RPG pirate. Because in this game, a rogue god is on the run, and the only way to catch him is to go looking for him through a massive archipelago of islands known as Deadfire.

How you go about your journey is up to you. Choose who you want to be, who you want to team up with, and more. Upgrade your ship for the water battles TO COME, and make sure that when this journey is over, you’re the last one standing!