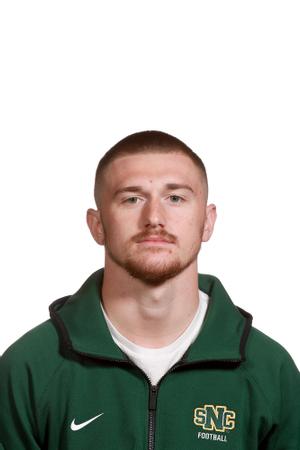 The Green Knights (3-1, 2-0 NACC) were locked in a street fight for most of the game before pulling away in the fourth quarter. Benedictine (4-1, 2-1) led 9-7 at halftime, but the Eagles, who were averaging 53.3 points per game going into play, managed only a second-half field goal to spoil their Homecoming.

Benedictine looked like she would keep racking up points when she took the opening kickoff and marched 80 yards in 12 plays to score on Nathan Rillo’s 1-yard touchdown run to take a 6-0 lead after a blocked attempt. The Green Knights responded quickly, needing just four plays to cover 71 yards. They scored on a big 58-yard touchdown pass from Richie Gilles to Parker Lawrence with 8:15 left in the first quarter to take a 7-6 lead.

Neither team would score again until the Green Knights stopped the ball inside their own 10-yard line. Benedictine kicked a 24-yard field goal by Tanner Mateus with 3:05 left in the second quarter to take a 9-7 lead to the halftime.

Each team had three empty possessions to open the third quarter until Lawrence returned a short 26-yard punt to Benedictine’s 33-yard line. Cameron Krueger scored on a 5-yard run with 24 seconds left in the third quarter to cap a six-play drive and retake the lead at 13-9.

St. Norbert’s Justin Benoit forced a Benedictine fumble near midfield with Nolan Wagner recovering at the Eagles 46-yard line with 8:29 remaining. The Green Knights scored again on a drive that was kept alive by Gilles’ 30-yard pass to Lawrence on a third-and-6 when Krueger scored on a 2-yard run with 4:14 left and a 20-yard lead. -9. The Eagles would then mount a series that led to a first-and-goal at St. Norbert 3; however, the Green Knights held on and the host had to settle for a 20-yard field goal from Mateus with 1:41 left.

The Green Knights would recover the onside kick that followed and score the final points of the game when Gilles found Lawrence on a 25-yard touchdown pass as time expired.

Benedictine outscored St. Norbert 377-336, but the Green Knights had an average starting field position of 39 while the Eagles started at an average of 23. Gilles completed 18 of 29 passes for 244 yards and two touchdowns with an interception. Lawrence had a career-high 175 receiving yards on eight receptions with two touchdowns. Austin Miller caught five passes for 55 yards.

Benedictine went through three quarterbacks in the game, and the trio completed 24 of 44 passes for 240 yards.

Joe Jung paced the St. Norbert defense with 10 tackles. Michael Creighton had nine tackles, including two tackles for loss, a quarterback sack and a forced fumble. Benoit had six stops along with his forced fumble.

St. Norbert will be back on the road at Wisconsin Lutheran College on October 8 at 1 pm The Green Knights will look to improve to 3-0 in the NACC.