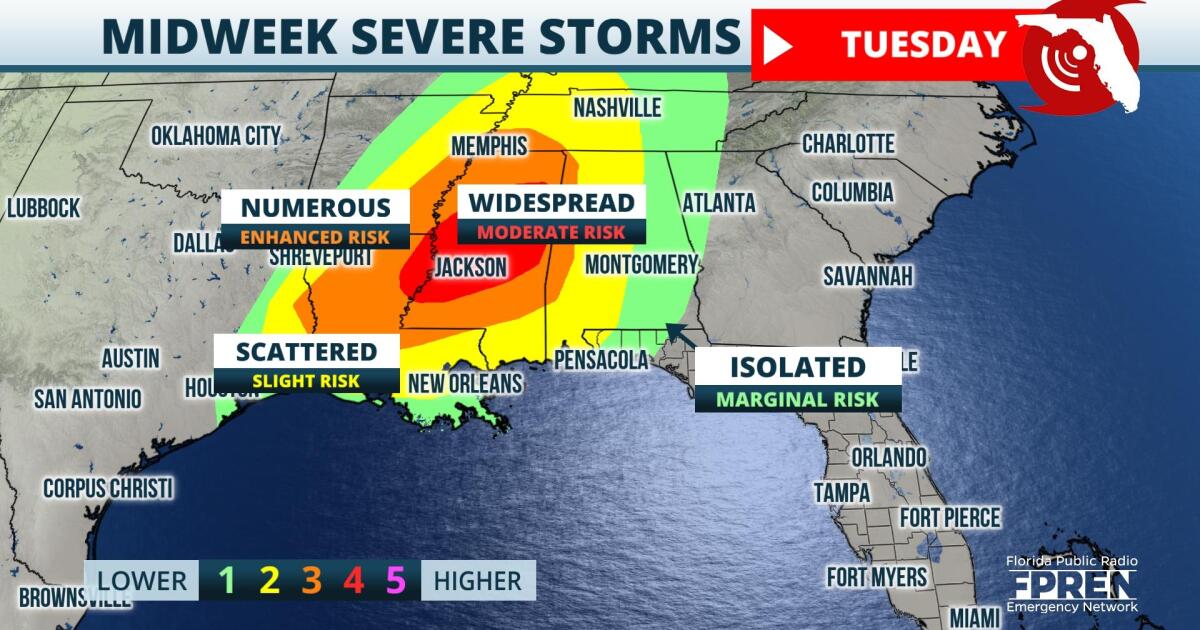 Severe storms are possible over the Florida Panhandle Tuesday night and Wednesday morning as another cold front heads into the region. The primary threats from this latest batch of storms will be localized flooding and damaging winds. Some tornadoes will also be possible.

As of Tuesday morning, a dynamic early winter storm system was developing over the Canadian Prairies and the Great Plains of the United States. The core of this system is expected to continue on an easterly track over the mid- and northern latitudes this week, but a cold front should extend from its center and span the eastern longitude of the contiguous United States.

Ahead of this cold front, a warm frontal boundary is projected to rise from the northern Gulf of Mexico to the southeast and the lower Mississippi valley. The introduction of a warm, moist air mass into this region ahead of the cold front should set the stage for dangerous thunderstorms Tuesday night and Wednesday.

Although models predict the greatest risk of severe thunderstorms and tornadoes will be over Mississippi, the possibility still exists for the Florida Panhandle. Groups of storms could move north from the Gulf Coast into the Pensacola and Panama City metropolitan areas Tuesday night.

Then, a strong line of potentially severe thunderstorms is expected to track from west to east across the Florida Panhandle Wednesday morning. This second batch of storms for Pensacola and Panama City could arrive before dawn. The Forgotten Coast and Tallahassee regions will likely be affected during the morning commute through late morning.

Then showers and thunderstorms should slide into northern Florida, including the Jacksonville and Gainesville areas by Wednesday afternoon. By Wednesday night the line should be weakening, however some gusty thunderstorms are possible over the I-4 corridor during and after rush hour.

Also, some thunderstorms embedded within the line could produce fast-tracking tornadoes. Finally, localized flash flooding is possible, especially between Pensacola and Panama City, where storms are forecast to occur both Tuesday night and Wednesday morning.

As usual, residents and tourists alike are encouraged to continue to monitor the forecast. When the National Weather Service issues alerts, seek adequate shelter until the hazardous weather passes.