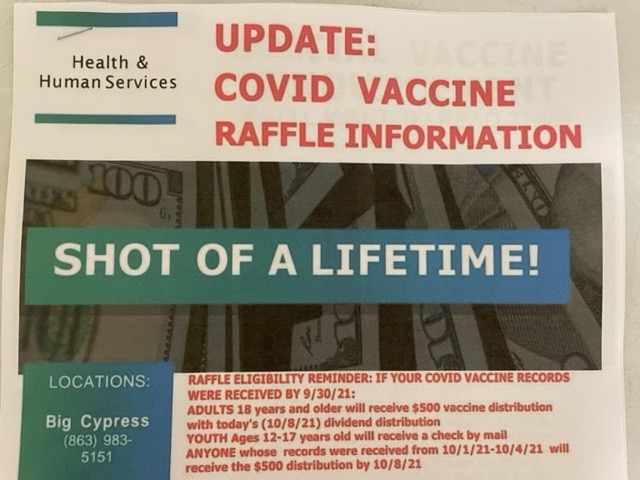 The Seminole Tribe of Florida used at least $3 million in federal COVID relief money to host a high-stakes raffle as an incentive to vaccinate tribal members as young as 12.

The flyers promoted the raffle as “The chance of a lifetime!” and announced that anyone who was fully vaccinated and provided proof by October 4, 2021 would be entered into the drawing to be held the following day.

Tribal critics accused Tribal Council Chairman Marcellus Osceola Jr. of “allowing the distribution of federal COVID funds by allowing a distribution through a lottery system conducted by Dr. Vandhana Kiswani-[Barley], Tribal Executive Director of Health and Human Services.” A recall petition accusing Osceola of mismanagement adds: “Many tribal members who received vaccinations and [were] eligible to participate did not enter the lottery and did not receive any money from federal funds.

“Tribal members are also aware that the President’s illegitimate son, who is a minor, was the million dollar winner,” the petition says. Osceola has denied both accusations.

The Broward-based tribe did not televise the drawing citing “patient privacy” and declined to name the winners, which it says were randomly selected by “a computer program.”

THE WINNERS WILL BE ANONYMOUS

An updated brochure released shortly after the draw says the winners “will remain anonymous” but noted they were between the ages of 13 and 68. The brochure says the million-dollar grand prize winner was said to be a Hollywood resident who lives off-reservation. . First-place ($750,000) and fourth-place ($100,000) winners live on the Hollywood reservation; the half-million dollar second-place winner resides on the tribe’s Big Cypress reservation. The third-place winner of $250,000 was described only as a “non-resident.”

Rather, the Florida Lottery operates under strict security guidelines and procedures to ensure fairness and transparency. They include having a law enforcement officer serve as the sweepstakes manager and an auditor from an independent auditing firm attend and participate in the sweepstakes. Extraction equipment is kept in a secure vault.

Even if the raffle wasn’t rigged, it could be problematic for Osceola and the rest of the five-person tribal council.

Federal Treasury rules regarding the use of $350 million in State and Local Coronavirus Fiscal Recovery Funds, part of the American Bailout Act funds administered by the Department of the Interior, allow tribal governments to use financial incentives to vaccinate their people. But only “so long as such costs are reasonably proportional to the expected public health benefit.”

Some, but not all, tribal governments have used COVID incentives, but with payments that are a mere fraction of those delivered by the Florida Seminoles. Examples include:

Anger over huge awards from the Seminole Tribe of Florida came to a head at a special Tribal Council meeting Oct. 10 in which more than 200 members sought the removal of Marcellus Osceola as chairman for that and other reasons. The effort failed, but not before Osceola called claims that he misused federal COVID funds and his son won the million-dollar raffle “false.”

President Osceola did not respond to phone and email requests for comment. florida bulldogHowever, he obtained a transcript of the October meeting of the tribe’s main governing body during which he expressed his thoughts.

According to the transcript, marked “For Tribal Members Only” and prepared by Tribal Clerk Jacob Ramos using an audio and visual MP3 recording of the meeting, Osceola acknowledged that federal COVID money was used for the large-scale lottery. amounts of money, but he said it was approved by the five-member council, not just him.

“I guess ‘he’ should be changed to ‘Council’ because the Council approved the distribution of COVID funds from the federal government,” Osceola said. “We were doing the same thing that everyone else was doing around the world — trying to get people vaccinated, trying to get herd immunity through the Tribe — and this whole Council here was part of that to approve these dollars to be spent to try to get people to sign up and get vaccinated so they can be part of this giveaway.”

“Again, [the] Tribal Council approved these funds, so it’s not a surprise. So if I am guilty of this charge, then the entire Council is guilty,” he said.

Osceola went on to say that the “false claim that a million dollar winner is my illegitimate child, um, you know it has repercussions on those allegations, because you know again defamation of character, slander,” Osceola said. “People are being sued for much less.”

RESEARCH ‘MUST BE DONE’

Tribe member Laura Billie, who wrote the recall petition signed by 285 members, more than the required 20 percent who voted in the 2019 election won by Osceola, said the president’s assurances about the raffle are not a sufficient explanation. and that an investigation of what happened should be done.

“Yes, but it would have to be someone independent of the tribe. It would have to be outside of the Seminole police who report directly to the president, just like the department of health and human services,” Billie said. “The way I see this is that the COVID funds are to benefit people… In this case, they used the money for a lottery and a lot of people didn’t benefit from that lottery, more than 80 percent.”

Lesley Billie, a member of the clan and cousin of Laura Billie and ex-wife of former boss James Billie, agreed, saying the money shouldn’t have benefited only a few. “I felt like we could have distributed it to the tribal members,” she said.

Dr. Kiswani-Barley declined to answer florida bulldog questions about how and where the raffle was held and referred a reporter to the general counsel of the Jim Shore tribe. Shore did not directly respond to a list of questions sent to him Thursday, but did have tribal spokesman Gary Bitner issue this statement:

“In the summer of 2021, during the peak of the COVID Delta variant disease, Seminole Tribal health officials received unanimous approval from the Seminole Tribal Council to implement a unique and inventive program to stimulate COVID vaccines that could prevent more illnesses and deaths. among members of the Seminole tribe. It was documented that many Native Americans were hesitant to get vaccinated, and Seminoles of all ages who were not vaccinated fell ill and died. The program included a nominal reward for the vaccinations and the opportunity to win raffle prizes. Winners were chosen at random through computer selected names of all vaccinated members. To ensure a fair result, a non-tribal staff member from the tribal health, IT and police departments were the only people present at the time of the drawing. The selected names were not made public due to the privacy requirements of all health records. The program resulted in a small increase in the vaccination rate among Tribe members. It is impossible to know how many lives were saved. Any suggestion of impropriety in any aspect of the program is absolutely false.”

Like many other state and local governments in the US, sovereign Native tribes have received several rounds of COVID funding, including through the $1.9 trillion American Rescue Plan signed into law in March 2021 and the Coronavirus Aid, Relief, and Economic Security (CARES) even bigger in 2020.

It is not known exactly which batch of federal COVID dollars was used to fund Seminole’s high-stakes lottery. USASPENDING.GOV, which tracks government spending, says Treasury has provided $149.7 million in COVID relief funds to the Seminole tribe of Florida, among the largest amount of federal aid provided to any native tribal government.

The Seminole Tribe of Florida is one of the wealthiest tribes in the nation. A pioneer in the Indian casino industry, it acquired Hard Rock International Inc. and its related entities in 2007. The global company owns the Seminole Hard Rock Hotel & Casino near Hollywood and has Hard Rock cafes, casinos and hotels in 75 countries.

In April 2021, the tribe entered into a 30-year gaming contract with the state of Florida that will pay the state a guaranteed minimum of $2.5 billion in new revenue over the next five years and an estimated $6 billion through 2030, according to the governor. . Ron DeSantis. The agreement, which also authorized sports betting in Florida through the tribe, was signed by DeSantis and Osceola.