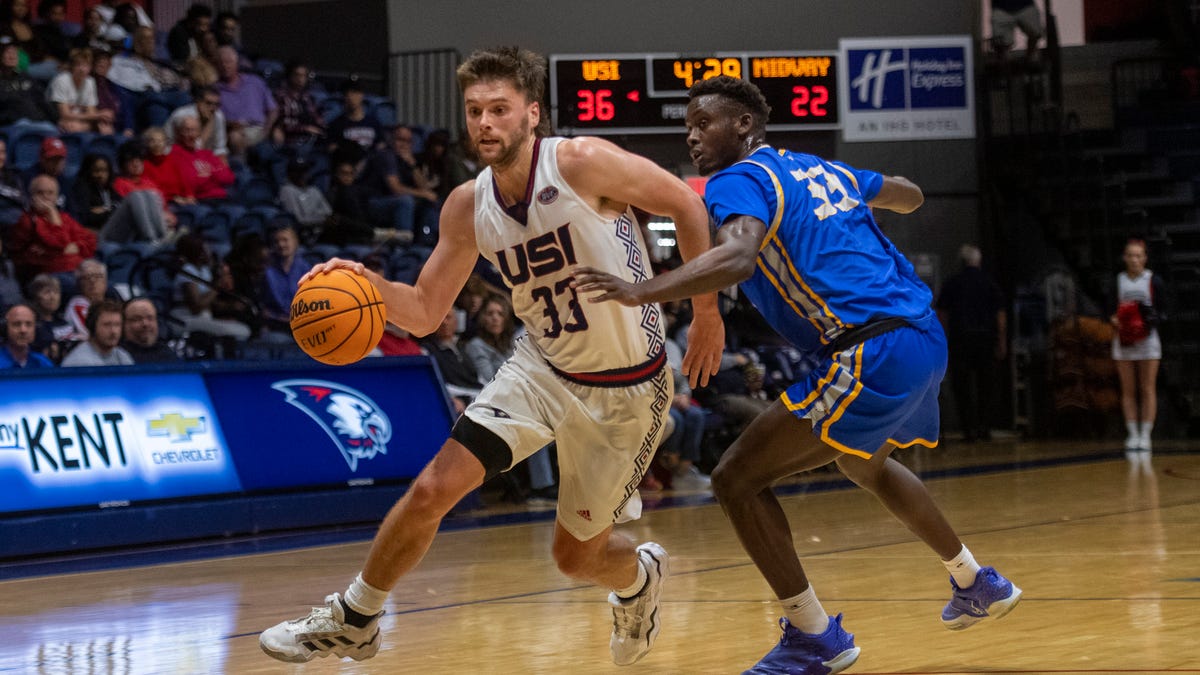 EVANSVILLE − Nearly a month into the season, let’s answer some questions from readers about University of Southern Indiana’s Division I debut up to this point and what to expect in the future.

Head coach Stan Gouard often warned fans and supporters over the summer that things could get worse before they get better. Some bumps in the road were expected with a tough non-conference schedule and the changes that come with the transition to DI. But overall? USI should be pleased with their placement going into December.

USI (3-3) is ranked 192nd in the KenPom rankings, higher than any other school in the Ohio Valley Conference. He earned an impressive home win over a top 100 KenPom program in southern Illinois and over the weekend picked up his first D1 road win at Bowling Green. They have been competitive, and they covered the gap, which is important for some of you, also against other quality opponents.

USI has the potential to keep winning as conference play approaches. If I had to give them a grade I would lean towards a B+ at this point. Taking into account the schedule and the new team? That’s not a bad start.

Now, let’s get to your questions.

Wondering why the USI and EU aren’t playing each other this year? — Justin

Since this question will continue to be asked until the two teams meet on court, I thought I’d go ahead and address this one first.

Both myself and UE Beat writer Anthony Kristensen have raised this issue several times with head coaches and the director of athletics. The sentiment, at this point, still seems to be the same: the game will happen when it’s right for both shows. But when would that be?

If you had asked USI coach Stan Gouard, the Screaming Eagles would have been ready for that contest this year. When brought up in September after USI and UE had already met in soccer and men’s volleyball, Gouard’s response spoke volumes: “We talked and (UE) is not ready. We have to leave it at that. I respect what (David Ragland) is doing there. But whenever they make that call, we’ll be ready to make the adjustment to our schedule to play that game.”

My opinion? This game should happen every year. No doubt. Rotate sites between your home stadiums or just split the game at a sold-out Ford Center. It would be the most attended home game for each team.

Will any of the current players on the roster be wearing a red jersey this year? — @eagle_ed11

At this point, there has been no official decision on whether anyone will use this season as a redshirt year. But there are a couple of players who could still be redshirted.

Sophomore guard Ryan Hall has yet to appear in a game for USI this year. The junior college transfer was signed for his 3-point shooting and his ability to defend. However, with USI’s depth on guard, it’s possible he could salvage a year of his eligibility.

Another possible name is striker Peter Nwoke. However, he redshirted one season while at Michigan State as a preferred walk-on a year ago, so he would have to receive a medical redshirt. He has yet to appear in a game for USI after battling injuries this offseason, but has dressed for the past few games on the bench. He could use this year to develop with other greats like Jacob Polakovich and Kiyron Powell.

Who loses USI after this year? There are some who have played four years but could have an extra year of COVID, which ones are gone for sure? —Kent G.

In the age of red jerseys, additional eligibility, and graduate transfers, it’s not always easy to keep track of who a “senior” playing their senior year of college basketball really is. In the case of USI, there are three players, who happen to be the top three scorers on the team.

There will be a lot of production to replace the next season.

Is the Indiana Classic for one year or will it come back next year? — Robert C.

It looks like the Indiana Classic taking place in Fort Wayne in December is for this year only. However, this question allows me to give fans an idea of ​​which non-conference opponents this season will also be on USI’s schedule next year.

Bowling Green, Chicago State and Western Illinois will travel to Evansville in 2023. This year’s meetings with Indiana State and Southern Illinois will also continue, as USI will visit Terre Haute next season and travel to Carbondale for two straight games against the Salukis in 2023. -24 and 2024-25.

Opponents are going to focus on Jelani Simmons. What adjustments can coaches make to give him some scoring opportunities? — Clay b.

This is a good question. Simmons’ impact on this team is obvious: he could see the difference between night and day during the second half of the St. Bonaventure game when he left with a back injury. But so far, the opponents have not been able to stop him. He is averaging a team-high 15.8 points and has scored more than 20 three times.

Still, if they start to lock him up, USI has several different ways to find opportunities for him. One will be your 3-point shot. The Eagles are shooting 40.8% from three and 46.6% overall, best in the Ohio Valley Conference. Opponents can’t afford to leave anyone open, especially Lakes (50%). While Simmons also shoots a high clip from deep (43.2%), defenses that have to focus on the 3-point line can create more opportunities for him at the rim.

Another key will be to continue to involve the big guys on offense. The more Polakovich and Powell can score in the paint, the more shots open up for everyone else. This is not only a benefit for Simmons, but also an advantage for a team that has shown its strengths beyond the arc.

Can we look to the future? What does recruiting look like now that we are officially D1? How much is not being able to be at the big dance holding us back? — @ringer_young

Recruitment for the future is already underway. While USI will certainly look to the transfer portal again, the search has already begun to find upcoming high school commitments.

Recruitment certainly looks a bit different for USI on D1 compared to D2 days. This summer, the coaching staff attended major AAU contests such as the EYBL Peach Jam, a high-profile event featuring top recruits from across the country. That is something USI would not have done in the past. There’s no denying that having Division I named after you attracts more recruits than in the past.

“When you have that DI tag next to your name, some people answer the phone a lot quicker,” assistant coach Jon Aldridge said before the season.

In terms of the poor four-year postseason mandated by the NCAA for teams in transition, admittedly, that has made things a bit difficult at times. Gouard has said there have been a few times this offseason when conversations with potential prospects have been quickly ended for that reason. It is the reality of schools like USI.

Can USI women win the OVC in the first year? —Kent. GRAM

I think they have a real opportunity. While they’ve carried their lumps to a couple of schools in the Mid-American Conference, I’ve still been impressed by their talent. They have depth at guard and forward positions and will have more returning players than any other team in the OVC.

Vanessa Shafford has become a threat to score 20 points every time. Meredith Raley, Hannah Haithcock and Ashlynn Brown can score at will, especially on the inside. Soffia Rieckers has proven to be a valuable point guard and defensive threat. Once USI gets Addy Blackwell back from injury, which could be shortly before conference play begins, they will have another weapon that can make some noise both offensively and defensively.

While there are a handful of tough teams — I have my eyes on preseason pick Tennessee Tech and Eastern Illinois — I see no reason USI couldn’t be in the thick of things for a No. 1 seed in the conference.

Why doesn’t the USI put names on the men’s away jerseys? —Drew N.

This is a question for which I honestly have no answer.

But I will say this, even though I am a fan of USI’s look both at home and away, I think the all-red uniform is still the best. There is something about it.