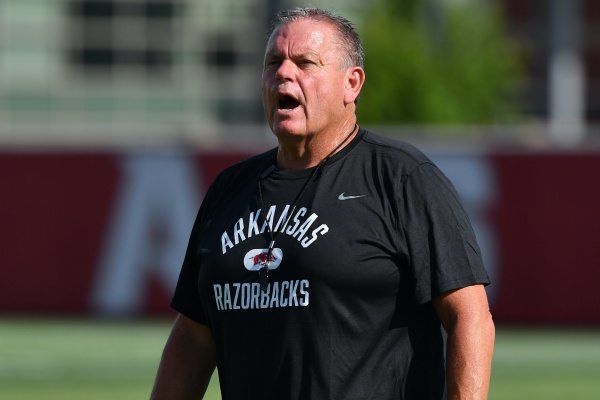 FAYETTEVILLE — On Sunday, the Arkansas Razorbacks will take their last day off before the season opener.

The University of Arkansas’ preseason No. 19 will host Cincinnati’s No. 23 on Saturday at 2:30 pm at Reynolds Razorback Stadium.

Pittman was asked at the Hawgs Illustrated Sports Club luncheon last week if the show’s turnaround has been faster than he expected.

“Well, it didn’t feel like it the first year, even though there were some really great things going on,” Pittman said. “Our children were competing and fighting.

“I’ve always been a huge Arkansas fan, so I always thought that Arkansas could be whatever they wanted to be, to be honest with you. I knew we had to win the close games. But get to nine in the second year? I’d be lying if I said I probably expected that. I probably didn’t.

“That doesn’t mean I didn’t trust and believe in the kids and the coaching staff. It’s just that we play in a big league.”

Coach Sam Pittman said quarterback KJ Jefferson has shown during camp that he has come a long way in making quicker reads on his keys and getting the ball out quicker.

“Yeah, you know, he’s been doing it all fall,” Pittman said. “I think getting the ball out of your hands quicker has a lot to do with knowing where to go with the ball before the snap.

“Going with the ball, where your reads are much faster if you’re covered, ‘I’m going there.’ I don’t know, you’d have to ask him, but I think a lot of times it was, ‘I’m going to go in with a reading, and if it’s not open, I’m going to find [Treylon] Burks. Which worked pretty well, you know.

“But this year I think he understands the covers and the looks and all of that. He has a faster pitch, but I think that’s why he’s throwing the ball faster.”

Safety Jalen Catalon could return to his former form this season after playing injured for six games last year and not looking good before undergoing season-ending shoulder surgery.

“He makes a lot of plays,” Arkansas coach Sam Pittman said of Catalon. “It looks fast. Maybe for all of you it always looked fast. But man, it looks fast.

“His eyes seem to be in the right place all the time. Great leader, he and [Simeon] Blair. Blair has also had an exceptional field. … But Cat is like she never missed a beat.”

Pittman said having leaders like Isaiah Nichols on the defensive front, Bumper Pool at linebacker and Blair and Catalon in the secondary has tremendous value.

“Any time you have leaders at every level, you can have responsible defense and fly into football, which we’re doing,” Pittman said.

It doesn’t look like a definitive decision has been made on the Razorbacks’ best kickoff return. But it looks like running back AJ Green and wide receivers Jadon Haselwood, Matt Landers and Isaiah Sategna are the top candidates, while Bryce Stephens and Sategna seem like the best options to return punts. Myles Slusher had been in the mix for the kickoff return, but was ruled out last week.

Landers and Slusher, speaking to members of the media last week, were asked what they thought about the possibility of returning kicks.

“I really do it to stay in shape, but if Coach needed me there, I would,” Landers said.

“I just go with the flow,” Slusher added.

Coach Sam Pittman said last week that he “never would have thought” wide receiver Warren Thompson would be the player he is now, based on what he saw from the 6-3, 193-pound at this point a year ago.

Thompson heard about Pittman’s comments and asked how he had changed.

“I just tried to change my mindset and my mental approach to the game,” Thompson said. “So it’s great to hear that from him, but I had that. I knew it had to be better since I played the last game, Penn State. So I knew I had to improve from that moment. And I made that my mission and my goal.”

“We don’t have that. everything we are doing [wrong], we can arrange. It’s just the little details. We had some offsides on the offensive line. We had a tough time on offense guarding at times.”

Senior Reid Bauer finally won the punt job in 2020, but in Arkansas’s second game at Mississippi State he was backing up George Caratan.

With the Razorbacks leading 21-14 and facing fourth-and-36 at the 50-yard line with 32 seconds remaining, special teams coordinator Scott Fountain told Bauer he was up after Caratan handled the game’s first seven punts.

Fountain said Bauer had recently shared his mindset with his teammates before the crucial punt.

“’It’s the last clearance of the game. I have to take it off or we’re going to lose,’” Fountain recalled Bauer saying. “He said, ‘I’m telling you, I almost passed out.'”

Bauer threw a nice pitch that Austin Williams caught at the Mississippi State 12. The Bulldogs went all the way to their 43 on the final play as Arkansas snapped its 20-game SEC losing streak.

Fountain said he had Bauer execute a rugby punt because he knew Mississippi State would run down the middle.

“I didn’t know if I was going to get into that game, and it looked like the game was going to be over,” Bauer said. “Coach Fountain told me to go warm up at the net.

“So that was going to be my first return to the field in over a year. … I just remember being pretty nervous at the beginning, just because I hadn’t made a lot of clearances, but I was confident in what I had been doing in practice.

“I went out on the field and all the noise faded away and it was almost like I could feel my heart beating out of my chest and that was the only thing. It was just me the snapper [Jordan Silver] and then my heart rate honestly.”

Sam Pittman said he learned from pushing too hard on his coaching decisions in last season’s 38-23 home loss to Auburn.

“If we go fourth and one, we don’t make it,” Pittman said at the Hawgs Illustrated Sports Club luncheon. “If we decide to kick a field goal, we miss it.

“Everything was a press. I learned a great lesson as a head coach: just stay in the game. Let them screw it up, because we’re not going to. Just let them be ruined.”

Pittman opted to have Cam Little attempt a 53-yard field goal on fourth-and-5 on the final play of the first quarter. Little missed, Auburn took possession on their 35 and drove for a touchdown.

In the second quarter, instead of attempting a field goal on fourth-and-1 from Auburn 18, Raheim “Rocket” Sanders was stopped for no gain.

Arkansas was also stopped dead in its tracks in the third quarter when quarterback KJ Jefferson rushed for 1 yard on fourth-and-3 from Auburn’s 30.

“I don’t need to push, and I made that game,” Pittman said. “After that, we did a little bit of racing to finish the year. “But I learned a big, big lesson that day as a head coach, and I’m still learning.”

Auburn’s game was Arkansas’ third straight loss and left the Razorbacks 4-3. They went 5-1 the rest of the season to finish 9-4. The Razorbacks’ only loss in their last six games came at Alabama 42-35.

The story caused laughter from the audience.

The Razorbacks set up their camp with practice times that mirror the start times of their first two games.

The start of practice was around 2:30 pm the first week of camp, kick-off time for the season opener against Cincinnati on Saturday.

“Everyone talks about the kids being hot. Damn, I was hot too,” coach Sam Pittman said, drawing laughter from the crowd at the Hawgs Illustrated Sports Club luncheon. “It was like 115 [degrees] and 119 heat index.

The Razorbacks practiced in the morning the second week of camp because their second game against South Carolina has an 11 am start.