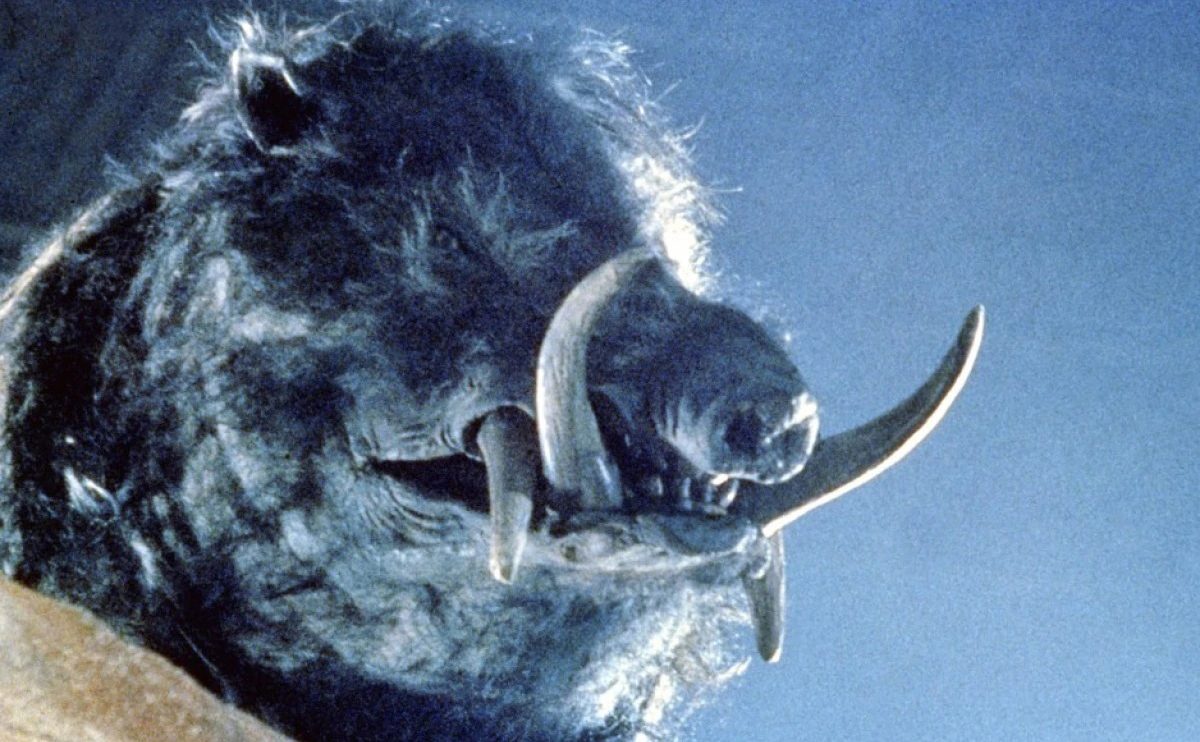 A hunter finds himself on the trail of a terrifying, massive warthog that has been terrorizing the Australian outback. Australia. A country of great natural beauty teeming with some of the most vibrant and exotic wildlife on the planet. Or, as I like to think of it, a vast desert island of scorching heat filled with monsters that eat children and drink Fosters. No offense to Australians reading, but your country is scary and I would love to visit. So with this in mind, let’s take a look at cult Australian natural horror. sharp top. essentially a movie jaws grounded but endowed with a hypnotic sense of style that is simply beautiful.

As I said in the opening, the story of sharp top is essentially a diluted (or dry?) retread jaws, though it takes place in the scorching, dusty desert of the Australian outback. And instead of a giant great white shark, we have a huge pissed off pig. We even get a variant of Quint in the form of a seasoned hunter with a burning hatred for hunchbacks, especially the one who took his beloved grandson one dusty and stormy night. However, unlike Jaws, which, while simple in concept, was loaded with moments of terror mixed with moments of rich character building, Razorback is just plain simple. The characters, while ably played by the cast, are flat, severely underdeveloped, and, with a few exceptions, largely forgettable. The hunt for the monster pig is also very underdeveloped and not particularly attractive.

I know there’s not much you can get into a tank-sized giant pig story, but at least you can make it exciting and action-packed. Instead, Razorback seems to move from scene to scene, often without much urgency or suspense. The titular monster doesn’t even feature that much. Neither did the shark in Jaws, but the lack of deep or engaging character development often leaves sharp top feeling like the inside, empty and seemingly devoid of life. The cast, led by American actor Gregory Harrison, do the best they can with what they’ve got, and Harrison is a helpful but generic hero. The real show stealers among the cast are Chris Harwood and David Argue as the Baker Brothers, a pair of misfits who live in caves and seem rejected from Mad Max (complete with a monster truck) and boast a laugh that will leave you wanting to cut your ears off.

Credit must also go to Bill Kerr as Jake Cullen, giving a sympathetic performance as a vengeful hunter seeking revenge for the loss of his grandson. Kerr also gets points for his flawless rendition of the movie’s best line: “There’s something about blowing the shit out of a hunchback that makes me happy all day.” While lacking in story and character development, where sharp top exceeds my wildest expectations is his amazing sense of style. Directed by Russell Mulcahy (perhaps best known for directing Highlander and scores of music videos from the 1980s) and shot by cinematographer Dean Semler, Razorback is simply stunning to watch. Endowed with a visual style full of fluid, swiping camera movements, creative lighting, fast cutting, and a vibrant color scheme that makes many of its frames a treat for the eyes.

The standout sequence occurs as Harrison, marooned in the desert, begins a long journey in which his increasingly dehydrated mind conjures up some surreal images. It’s a beautifully shot scene of creatively used flares, shooting stars (which I’m not entirely sure are fake), and alternating vivid reds and soothing blues, with various elements combining to give the interior an almost otherworldly vibe.

The most famous shot in the film occurs during this sequence, and it happened entirely by accident. The moon was needed for the scene, so the team built a simulated one to use. However, while the scene was being filmed, the real moon accidentally joined the shot. Thus, we have a surreal and eerie image of two moons in the sky, this lucky lunar error perfectly expanding the already heavy surrealism of the sequence.

The final confrontation with the hunchback also stands out, with the hissing shots from the crane, the deep, dark, blue lighting, and the quick editing making the obviously fake-looking monster look like a genuine threat. Who would have thought that a movie about a giant pig would also be one of the most compelling horror movies of the 1980s? I honestly had a hard time trying to qualify sharp top. On the one hand, the story is repetitive and lacks character, except for the Baker Brothers, and the story is too similar to Jaws, but without the rich character moments and suspense. However, the stunning visuals and masterful editing give the film a music video-like style that is impossible to take your eyes off. All in all, sharp top It’s a mixed bag, but one that’s at least worth checking out.