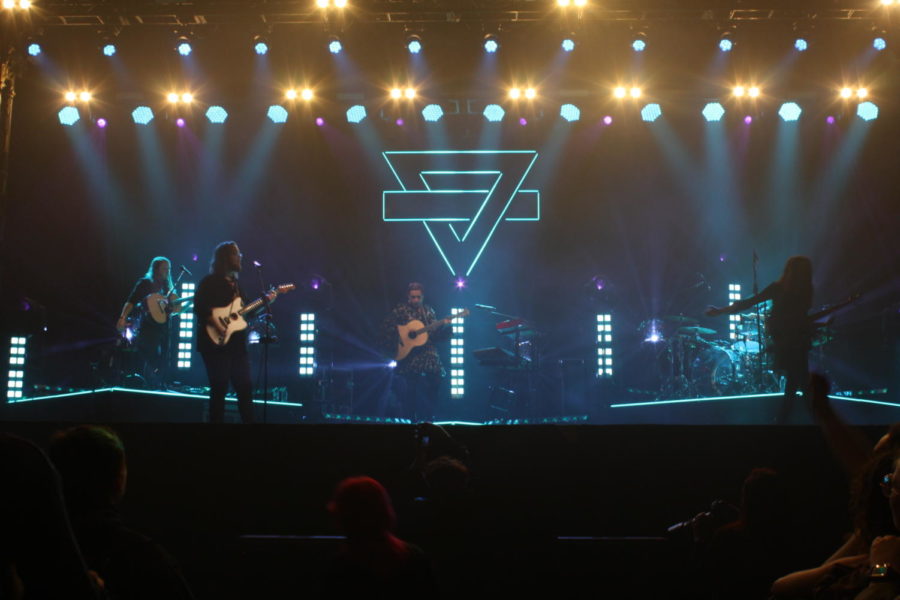 Known for their folk harmonies, infectious rhythms, and perfectly timed instrumentals, RKS is a must-see show.

With the excited chatter of the crowd echoing around me, I looked up, spinning in slow circles, mesmerized by the glowing constellations on the ceiling of Chicago’s Aragon Ballroom. Heads appeared and disappeared from view on the castle-like balconies that lined the second floor as people pushed their way forward. In the press pit, I felt strangely isolated just steps from the crowd. By stuffing earplugs, that physical distance became mental too. The noise behind me blended as I focused on the rainbow line of lights on the stage. The words of one of the other photographers in the pit echoed through my head: “I’ve been to a lot of concerts, and Rainbow Kitten Surprise is the best I’ve ever seen.”

The five band members ran out to a chorus of applause. They assumed their positions and waited for a pause before guitarists Ethan Goodpaster and Darrick “Bozzy” Keller played the distinctive first notes of “All That and More (Sailboat).” The guitarists paused for a moment before the rest of the band chimed in, strumming and singing along. As with many Rainbow Kitten Surprise (RKS) numbers, “All That and More” has soothing vocals with an underlying rhythm that subconsciously gets your feet moving. After the first verse, the crowd’s foot-tapping transitioned to applause, just like on studio recordings of the song. There was no instruction necessary.

Down in the pit with the musicians on a pedestal above me, I felt like the whole band was playing just for me. Knowing that this was by far the best view I’d get all night standing at five feet, I kept my eyes trained on the band: Ela Melo, lead vocalist, seated at her piano, Goodpaster to her right, the drummer Jess Haney to her. left. I joined the audience in nodding to “Black and White,” another smooth song whose folky harmony alternated with lyrics so energetic they almost screamed at each other. The different tones present within a song heralded energy oscillations to come.

For the third RKS song, Melo ditched the piano and took center stage flanked by bassist Charlie Holt and guitarist Keller. “Our Song” was abruptly different from their previous tracks, being closer to indie-rock than folk and one of the band’s most aggressive pieces. The song uses clever breaks in the percussion and vocals to build tension that culminates in a verse describing a fight scene playing out simultaneously onstage between Holt, Keller, and Melo. The song reflects the hardships and stresses that come with deep friendships, and the band members’ chemistry showed that they love making music together so much that their inevitable bickering is almost part of the fun. That energy is contagious, and as Melo twirled, her skirt swinging around him, he carried that excitement through the crowd.

While the name “Rainbow Kitten Surprise” apparently originated from a drug-induced haze from one of the band’s friends, everyone I told about this gig thought I was looking at something (ie. screamo or heavy metal) that would be striking when juxtaposed with images of rainbow kittens. Those friends had a point. RKS could be described as alternative indie, but that doesn’t encompass the layers and varieties of the band’s music. Each song is a little different, borrowing elements from folk, indie rock, hip-hop, and musical theater. “Mr. Redundant,” with its shimmering piano chords resembling show tunes, is probably the best example of the influence of musical theater on RKS’s style. But more important than the elements of stage music are theatrical personalities and the performances of the artists.

Because the audience knew the lyrics, there was a dialogue between the crowd and the performers in which each fed off the other. While that energy isn’t uncommon, I’ve never seen it executed better than by RKS. I have also never seen a stage fight like theirs. It’s the raw energy and emotion of the band, coming offstage and into the crowd, that creates an intimate experience between audience and artist. The first time you hear the recordings of some of RKS’s songs, they fall apart, but every minute live is intoxicating. Rainbow Kitten Surprise stage presence done his show.

Throughout the middle part of the set, the band kept up their energy by sprinkling on some of their best pieces, including “Lady Lie,” “All’s Well That Ends,” and “Mission to Mars.”.They held on to their real gems, the ones everyone was eagerly awaiting, until the end of the night, when the band hit the audience with their back-to-back favourites. Stage lights painted the band red as the opening notes of “Devil Like Me” echoed through the ballroom. Melo’s crisp yet slightly scratchy voice resonated, complementing the eerie undertones of the guitars and lyrics. A twang was barely audible with the pronunciation of certain words, hinting at the band’s North Carolina roots. The band transitioned to “It’s Called: Freefall,” their highest-ranked song on Spotify and self-titled from their most recent album. How: friend, love, free fall. The song and her performance embodied everything that RKS is: cryptic lyrics that touch on friendship and personal demons, beautiful harmonies in which each individual’s voice intertwines with the others, and a complex instrumental finale in which the five turned themselves in.

For his last low-key song, “First Class,” Melo transitioned to an acoustic guitar that complemented the yearning and pleading evident in the lyrics. Although the song is made more for belt tapping than jumping, everyone knew what words they were supposed to shout and it served to set the audience up for my personal favorite song, “Cocaine Jesus.” Artfully tying together the best aspects of all his work—the foot-stomping rhythm, lyrical harmonies, and perfectly timed instruments—“Cocaine Jesus” explores memories, love, and longing. RKS wowed the audience with the urgency and intensity of the song’s performance, bringing the show to a climax leading up to her last song, “That’s My Shit.” This song is not among the most popular, but the repetition of the phrase “that’s my shit” was the perfect outlet for the energy of the room and really showed the confidence of the performers.

Even before the band completely left the stage, the audience begged for one more. They complied, resting long enough to ensure the whoops of an encore before returning to the stage. Melo took a moment to thank the crowd and name each of his band members. They moved through “Run” before aptly ending with “Goodnight Chicago.” Melo’s repeated pleas for Chicago not to “shut up on me now” were met with the overwhelming feeling that it really was the end of the night.