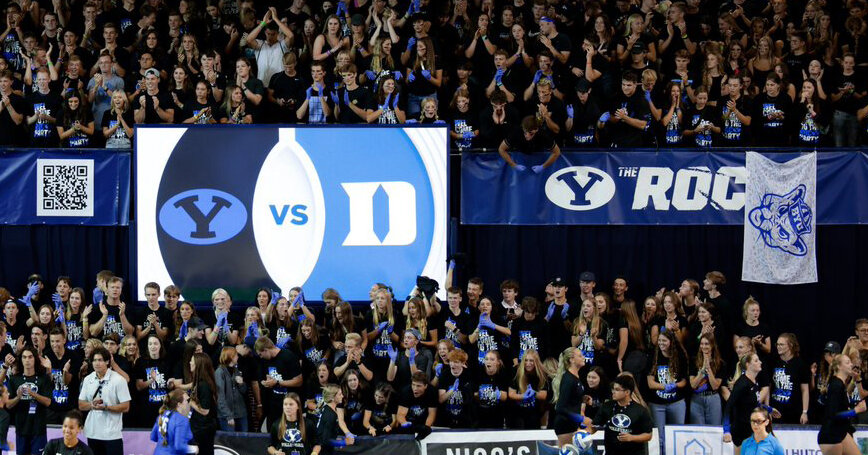 A Brigham Young University fan was banned and a Saturday women’s volleyball game moved to a different venue after a Duke University player who is black received a racial slur during a game Friday.

But Lesa Pamplin, who described herself as the Duke volleyball player’s godmother, said on Twitter that her goddaughter was the only black starter on the team and that she was repeatedly racially slurred while serving.

“She was threatened by a white male who told her to watch her back going to the team bus,” Ms Pamplin wrote. “A police officer had to be put next to his bench.”

Marvin Richardson, the father of the Duke player, said his daughter cried to him on the phone Friday night about the episode. Mr. Richardson, who grew up in Fort Worth, Texas, during desegregation, told her that he had the support of his family, friends and team.

In a sentenceBYU’s athletic department said the fan who was banned was sitting in the university’s student section during the game at George Albert Smith Fieldhouse in Provo, Utah, but was not a student.

The statement said that BYU was “extremely disheartened” by the actions of “a small number of fans” and that “the use of a racial slur at any of our sporting events is absolutely unacceptable.”

“We sincerely apologize to Duke University and especially its student-athletes who competed last night for what they experienced,” the statement said.

BYU, a predominantly white university that has a student population that is less than 1 percent black, has struggled to create an inclusive environment for its students of color, according to a February 2021 report from a university committee that studied race in The Campus.

The report found that the university lacked institutional support for its small community of students of color, failed to recruit and retain a diverse student body, and had a faculty that had a fraction of the diversity of the national average, with less than 7 percent . of faculty members who are people of color.

In a statement, Duke University said officials have moved Saturday’s game against Rider University to a different location in Provo to create the safest atmosphere for both teams.

The game, which was scheduled to be open only to staff and family members, is part of the same tournament, the doTERRA Classic, in which BYU played Duke. BYU won 3 games to 1.

“First and foremost, our priority is the well-being of Duke student-athletes,” Nina King, Duke’s vice president and director of athletics, said in a statement. “They should always have the opportunity to compete in an inclusive and anti-racist environment that promotes equality and fair play.”

Both universities did not immediately return messages on Saturday.