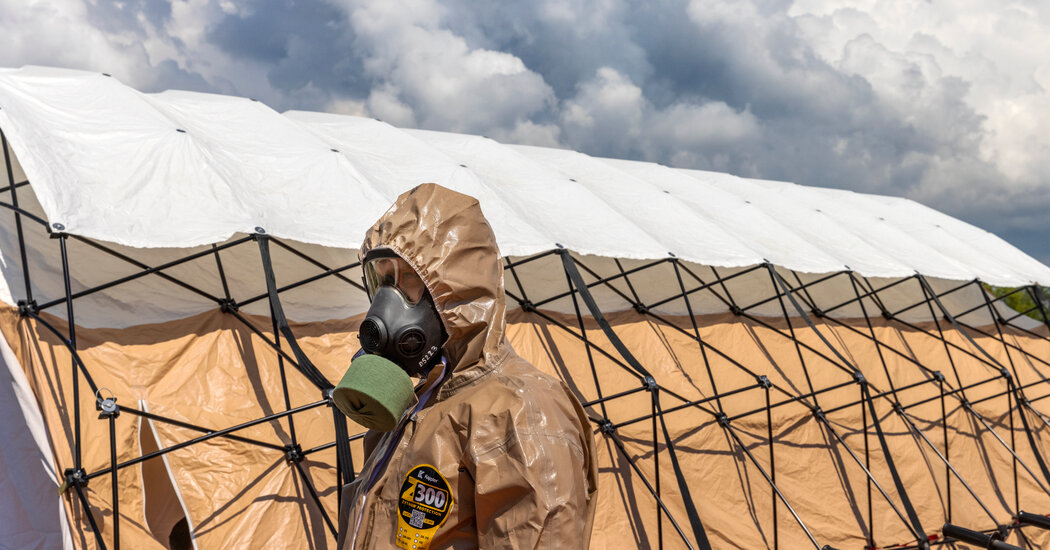 There were reports on Saturday that the International Atomic Energy Agency has a team of experts ready to visit Ukraine’s Zaporizhzhia nuclear power plant in a few days. It wouldn’t be a minute too soon: artillery shells rain down with chilling regularity in and around the facility, Europe’s largest nuclear power plant.

Sanity is a hard sell in a war in which Russia is waging a scorched-earth campaign to bring Ukraine to its knees, and Ukraine is fighting for its survival. However, the recent agreement to allow grain to be shipped out of Ukraine showed that international pressure on Russia to prevent the conflict from spreading beyond the battlefields can work. And with Chernobyl as a shared traumatic memory, Russians and Ukrainians know better than most nations the horror of a nuclear catastrophe.

I was the Moscow bureau chief of the Times when Chernobyl erupted in April 1986, and I well remember the haunting fear of an invisible, deadly threat that permeated the clean spring air. Thirty-six years later, nearly 1,000 square miles around the injured plant are still sealed as a Zone of Alienation. Those memories no doubt lie behind reports that Ukraine is preparing evacuation plans for some 400,000 people living near the Zaporizhzhia plant.

Zaporizhzhia is a more modern and much safer model than Chernobyl, theoretically capable of withstanding much greater damage. But the potential for massive disaster as lethal projectiles rain down on nuclear reactors, cooling towers, engine rooms and radioactive waste storage sites is real and present.

Seized by the Russians shortly after they invaded Ukraine six months ago, the sprawling plant on the Dnipro River is now on the front lines of the war. A Times report on Tuesday detailed what that means: exploding artillery shells and tracer shells ripping through the complex as a skeleton team of Ukrainian technicians holds the plant under the gun of some 500 Russian soldiers.

The Times reported that during the initial Russian invasion, a large-caliber bullet pierced an outer wall of one of the six reactors, while an artillery shell hit an electrical transformer filled with flammable cooling oil in another. Loss of electrical power at the plant could have caused a meltdown. Fortunately, it didn’t light up.

IAEA Director General Rafael Mariano Grossi recently outlined seven critical must-haves for nuclear safety and security, including plant physical integrity, off-site power supply, cooling systems, and emergency preparedness. . “All of these pillars have been compromised, if not violated outright, at one point or another during this crisis,” he warned.

The plant, and all other nuclear power plants in Ukraine, and all nuclear power plants in the world, should ideally be considered demilitarized zones. That is essentially what UN officials have called for. But that’s a tall order in a war of attrition and survival. A more immediate, urgent and achievable goal is for experts assembled by the International Atomic Energy Agency to enter the plant.

The IAEA, the United Nations and Western leaders have organized such a mission. Ukraine and Russia say they are in favour. But driving mortal enemies back has not been easy. Instead, the bombardment has intensified this month, along with a war of words.

The Ukrainians, along with Secretary of State Antony Blinken, accused the Russians of using the plant as a “nuclear shield” for troops, weapons and ammunition, and of firing in and around it. The Russians have accused the Ukrainians of shooting at a plant they say Russian soldiers are protecting.

In an unsurprising act of brazenness, Russia convened a United Nations Security Council meeting this week to air its claims, prompting the Ukrainian ambassador to deplore wasting “more than an hour listening to a lot of fictional sound bites.

It is almost impossible to determine who is shooting. But the fact is that there would be no threat of a nuclear catastrophe if Russia had not invaded Ukraine, and the danger would quickly end if the Russians left.

After weeks of disagreement between Russia and Ukraine over how the IAEA would get into the plant, experts are ready to check it out and propose how to make it as safe as possible.

Ukraine has called for international military and nuclear experts to be permanently stationed at the site to ensure the power plant and its immediate surroundings are safe and free of heavy weapons. These are legitimate concerns and just demands; Russia, however, has rejected the creation of a demilitarized zone around the power plant.

But these are differences that can be resolved, ‌through quiet negotiations, ‌if both sides agree to the broader imperative of avoiding a nuclear disaster, one that is as disastrous for Russia as it is for Ukraine or any other territory that radiation might reach.