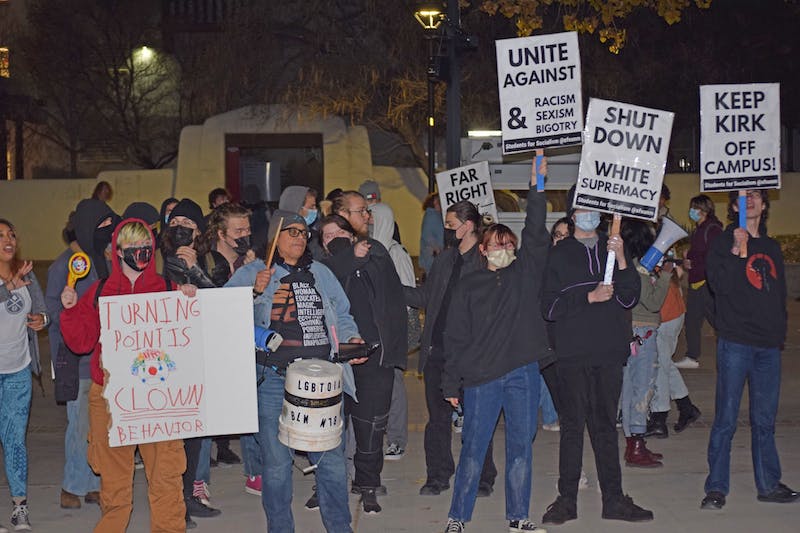 This story was originally published by Source New Mexico

State police in riot gear showed up at the University of New Mexico Student Union building during a peaceful protest and detained three protesters of color on Wednesday, November 30.

The protest was held in response to the Turning Point USA UNM chapter hosting a campus speaking event with Charlie Kirk, the founder and president of the national conservative group.

At UNM, a crowd began gathering outside the Student Union building around 5 p.m. intent on drowning out Kirk with sound: loud music, banging pots and pans, drumming on buckets, and chanting. UNM police and hired security watched. Two hours later, when Kirk was scheduled to speak, fewer than 100 protesters remained, some on the ramp near the building.

That’s when State Police officers ran up in riot gear, formed a line, and began to physically push the protesters back.

“I really thought if we stayed there, maybe they would stop. I had no weapons. None of us did,” said community activist Lisa Christopherson. “And none of us were hitting them, hitting them or anything. Really just standing there.”

UNM law student Diego Guerreortiz saw Christopherson being approached and pointed at her, he said. They also kicked him while he was on the ground.

“As soon as I raised my hand and pointed at it, I was punched in the stomach from behind and then tackled and then handcuffed,” Guerrerotiz said.

Guerreortiz said that two UNMPD detectives also informed him that he would face administrative action from the University.

“I don’t feel safe with the way UNM uses the police, let alone who they let talk on campus,” Guerreortiz said. “But I am more concerned about the police presence and how they use it as a weapon. That’s crazy coming from the University.”

Christopherson fears the arresting officers broke her ribs, she said, and she has symptoms of a concussion. Paramedics took her to the emergency room after being detained by police. Because the hospitals were full and the wait was so long, the doctors were unable to see her and she said she would head to a waiting room during the day on Thursday, December 1.

Do you enjoy what you are reading?
Receive content from The Daily Lobo in your inbox

UNMPD officers were sent to the event as security, according to university spokesman Cinnamon Blair. Blair said UNM does not fund the State Police presence on campus, but the agency is part of the event management planning and Emergency Response Team.

“ERT is deployed to ensure the safety of the University community and campus, and was engaged last night in response to the actions of several individuals who failed to disperse from the event entrance ramp when requested,” Blair said. it’s a statement.

Christopherson said she never received direct instructions to clear the ramp before she was stopped.

The protest was organized by students and local activists from the Southwest Solidarity Network, including Julie Bettencourt and Zach Smith. His goal for the night was to drown out Kirk’s speech outside the building and have a continued presence against the organization and the speakers to “let them know we won’t have that.”

During the protest, Turning Point students watched the crowd from inside the SUB filming with their smartphones. Kirk himself appeared outside, waving to the protesters from the top-floor balcony. A Turning Point member, Kalen D’Almeida, filmed the protesters as he stood with police until he was asked to leave several minutes later.

Jay Littles, a protester there that night, said it’s hypocritical for police to only stop protesters.

“We are here. We have the right to protest peacefully. Yet we are here being arrested on our own campus, which is, by definition, an open campus where we are allowed to speak our minds,” Littles said.

That policy is why the Turning Point chapter was allowed to invite the speaker in the first place, he added.

Littles noted that the University bills itself as a diverse campus, but still allows events like this, which make it feel more unsafe on campus.

“That’s one of their talking points for us to come here. But they only use it by name,” Littles said. “They don’t really care about the population of the school.”

Maddie Pukite is the editorial director of the Daily Lobo. They can be contacted at [email protected] or on Twitter @maddogpukite