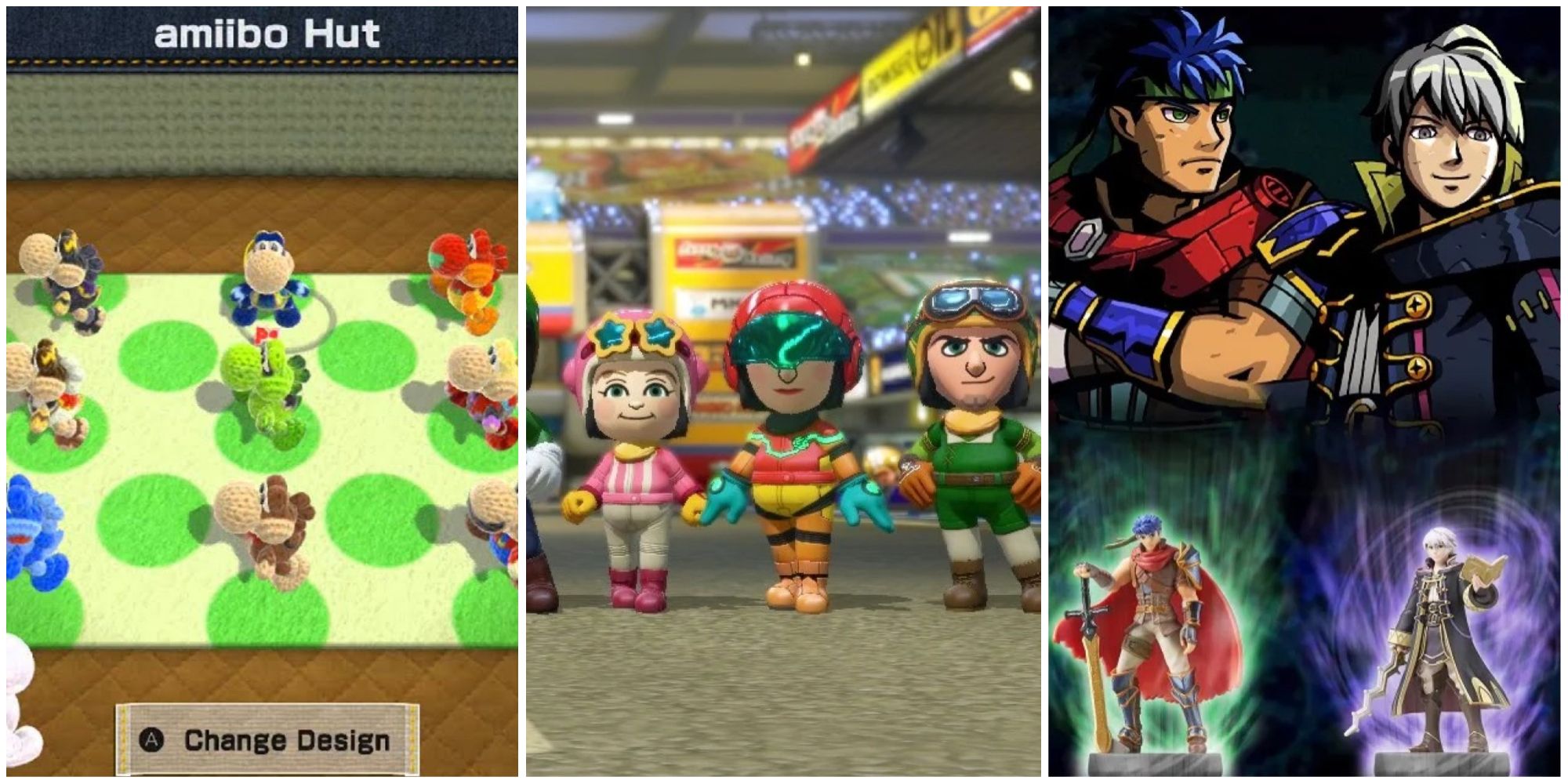 Once upon a time, the toys-come-to-life craze dominated the gaming industry, with numerous developers trying to come up with the newest thing. Years later, only Nintendo amiibo figures are still in production, slowly being added as a collectible rather than a bonus feature in certain games.

Related: Nintendo Amiibos That Are Impossible To Find (And How Much They’re Worth)

Nintendo and other developers went to great lengths to incorporate amiibo into certain games; in the worst case, the entire modes were locked by the purchase of a figure. At their best, though, amiibo made a game better, giving a welcome boost of replay value to your experiences to make great games even better.

Nintendo’s longest-running Mario Kart game is a giant in both sales and fun. Among the many reasons to buy this game as a Nintendo Switch owner is amiibo compatibility. You can compete as your own Mii in the game, but scanning certain amiibo will unlock new costumes for them.

Captain Falcon, Kirby, Sonic, Pac-Man and more get their own outfits when you scan their respective figures. Certain outfits have your Miis dressed up as those characters, further expanding the game’s already expansive roster. If more racers were added with the Booster Pass, then the game would have quite an impressive legacy.

9 The Legend of Zelda: Breath of the Wild

The Legend of Zelda: Breath of the Wild gained its success by being a drastic departure point for the franchise. However, those who wanted a more aesthetically traditional experience could scan multiple Zelda amiibo to get the job done. Depending on which version of Link you scan, you will be rewarded with an outfit from the respective game. The Ocarina of Time amiibo would give you the outfit from that game, the Wind Waker amiibo would give you the Toon Link outfit, etc. All this without mentioning the Wolf Link amiibo that can bring the canine version of Link from Twilight Princess along on your journey. .

Super Mario Maker was a phenomenon when it was released on Wii U. While the sequel on Nintendo Switch has several additional features, one thing that was conspicuously left out was the amiibo costumes. In the original game, you could scan just about any amiibo on the market at the time and get an 8-bit version of that character as a costume for Mario. Greninja, Sonic, Charizard, Link, and more were depicted as costumes in the game. This also required the developers to create 8-bit sprites for characters who had never had one before.

Shovel Knight was a resounding success on Nintendo consoles, leading it to become one of the most well-known Kickstarter projects. Years after its release, Shovel Knight had an amiibo that unlocked co-op mode, a customizable player character, and more.

Related: Things We Wish We Knew Before Playing Shovel Knight

That wasn’t the end of Shovel Knight amiibo support, as a three-pack containing protagonists from each of the other campaigns received their own figures that had notable in-game functionality. They added new costumes for the characters, as well as additional minor improvements to your adventure.

When it comes to customizing your island in Animal Crossing: New Horizons, one thing that people love to play with is the villagers. Fans prefer their own villagers, which means any way to manipulate who visits your island is welcome. New Horizons supports Animal Crossing amiibo cards, which allow you to call any villager as a guest as long as they have a card. This is a cheap way to beef up your Animal Crossing collection while having more customization for your island.

The release of Skyrim on the Nintendo Switch was a monumental change for Big N’s third-party support. It didn’t stop there, though. Players of the Switch version of Skyrim who owned a Legend of Zelda amiibo could scan it and gain access to Link’s outfit from Breath of the Wild, including the Hylian Shield and Master Sword. This gives you an official way to dress up as the Hero of Hyrule in one of the most iconic open world RPGs ever created.

Splatoon 2 is a game where you modify your character to make sure they look and play the way you want them to. While there are more than enough options for customization built into the game, you can go even further by scanning Splatoon amiibo.

Figures related to both Splatoon games will give you unique cosmetics that can’t be obtained otherwise. This includes a futuristic robot suit, a samurai suit, and more. If you want to stand out from the Inkling crowd, then the Splatoon amiibo is worth a look. They will also be compatible with Splatoon 3, which means they will continue to work on current games and hardware.

It’s a shame people forgot about Codename STEAM so quickly. This tactical RPG had you control a group of iconic literary figures in a steampunk setting to defeat aliens and save the world. It was a unique setup pairing with fun gameplay. Perhaps the most interesting feature, however, was the game’s amiibo compatibility. If you had any of the previously released Fire Emblem amiibo (Marth, Ike, Robin, or Lucina), then you could scan them into the game and recruit those characters to your team. Being a game of tactics, Codename STEAM was a welcoming home for those iconic heroes.

While it’s been years since Yoshi’s Woolly World was released (and its follow-up, Yoshi’s Crafted World, was released on the Nintendo Switch), some would still argue that it’s one of Yoshi’s best adventures. Unlike its successor, Yoshi’s Woolly World included amiibo support which gave many people’s collections a reason to use them. Throughout the game, if you collect enough special yarn, you will be rewarded with a new pattern. Another way to get new patterns is by scanning amiibo. The pattern depended on the amiibo you scanned, allowing you to get patterns for Mario, Shulk, Donkey Kong, and other specific characters.

The debut game for amiibo remains one of the best uses of them. In Super Smash Bros. for Wii U, 3DS, and Ultimate, you can take an amiibo, scan it into the game, and create an AI fighter that learns from the attacks you throw at it. The fighter’s data is stored on the figure itself, meaning you can train one, take it to your friends, and immediately have a partner ready to go. The best part is that a figure from the Super Smash Bros. series is not required for this feature. As long as the amiibo is from a character represented in the game, it can be from any line of amiibo you own.

Next: Game Characters Who Deserve An Amiibo Figure