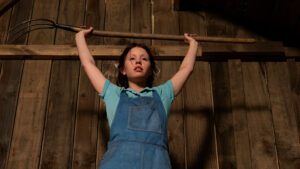 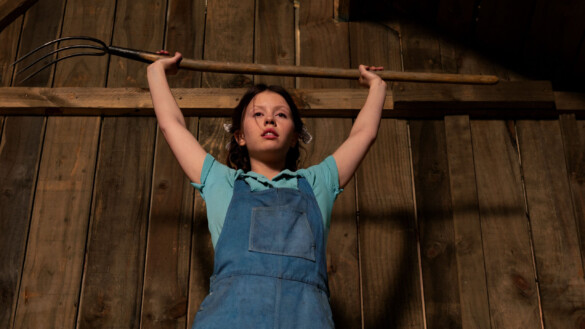 Synopsis: Story of how Pearl became the person she was

The second film released by Ti West starring Mia Goth this year, Pearl, is the prequel to X, and tells the story of Pearl, a young farm girl who would do anything to leave her life on the farm behind. With a groundbreaking performance from Mia Goth and a passion for the genre that manifests itself in every frame, West’s latest film is a fantastic genre film that will inspire future filmmakers.

From its earliest moments, Pearl reveals itself as a love letter to the Hollywood movies of yesteryear. Its setting, southern accents, opening credits font, and long shots evoke movies likeThe Wizard of Oz. Even Pearl’s character’s motivations mirror Dorothy’s, as she talks to the animals about how she can’t wait to leave the farm. These moments are immediately juxtaposed with the horror twist of Pearl, with the violence that seems to lurk around every corner.

It is West’s total commitment to the stage of Pearl that allows it to stand out as one of the great horror movies of the year. It’s not just Tom Hammock’s production design and Ben Milsom’s art direction that transports this film to the Hollywood cinematic era of the 1930s. Ti West’s screenplay furthers this narrative, and all the actors speak in the cadence typically associated with 1930s movies. Eliot Rockett’s cinematography furthers this style of filmmaking, through wide panning shots and the use of deep-focus cinematography. The shots are locked so that the camera does not move as much as possible, to promote the illusion that Pearl It truly is a film from the golden age, in Technicolor. West’s understanding of cinematic language is on display and works in perfect tandem with his horror aesthetic. When the language changes even a little bit, it tells the audience that something is not right. And that is reflected in the outbursts of violence, which use camera movements, superimposition of images and cross-sections. It’s stylized to the max, honestly leaning on the artifice of its entire story to make for an engaging experience.

This is not to mention the performance of Mia Goths in the role of Pearl. Goth has really cemented herself as the horror actress of a generation, through her complete dedication to the brooding title character. Her ability to change from a naive hopeful farm girl to a terrifying horror monster is unlike any other. She compartmentalizes the opposing sides of Pearl’s life and gives each half a powerful portrayal that greatly enhances the film. The supporting cast also play Goth beautifully, adding her own shock, terror and anxiety as they realize who Pearl has become. Tandy Wright’s role as Pearl’s mother is particularly memorable, due to her jaded performance. Emotions are kept to a minimum until everything falls apart, and that change of pace drives the story forward in a horrible way.

The story, however, falls into its own traps as a standalone film. Pearl could be a prequel Xbut your own ideas may be based too much on what has already been said in X. There are a lot of themes that come up when telling a story of rejection, especially when it comes to film and entertainment. Pearl’s character struggles with her own identity and desires, and with the feeling of being trapped throughout the film. These are the basics of Golden Age storytelling. And the horror twist adds a tragic element to this tried and true story that has been told for generations. However, it doesn’t fully work. The structure of this film, and its golden age tropes, establishes Pearl as a likeable character, and leads viewers unfamiliar with X see her as a main character who has a journey of discovery ahead of her. While these ideas are refuted by the end of the film, its harsh and abrupt nature leaves a trail of confusion. It’s shocking and horrifying, and for those unfamiliar with X, bitter Pearl it’s a masterclass in horror filmmaking with a powerful ending, but it relies on familiarity with the franchise holding it back.

This October, there will be constant statistics to raise awareness about this deadly disease that represents… Read more »