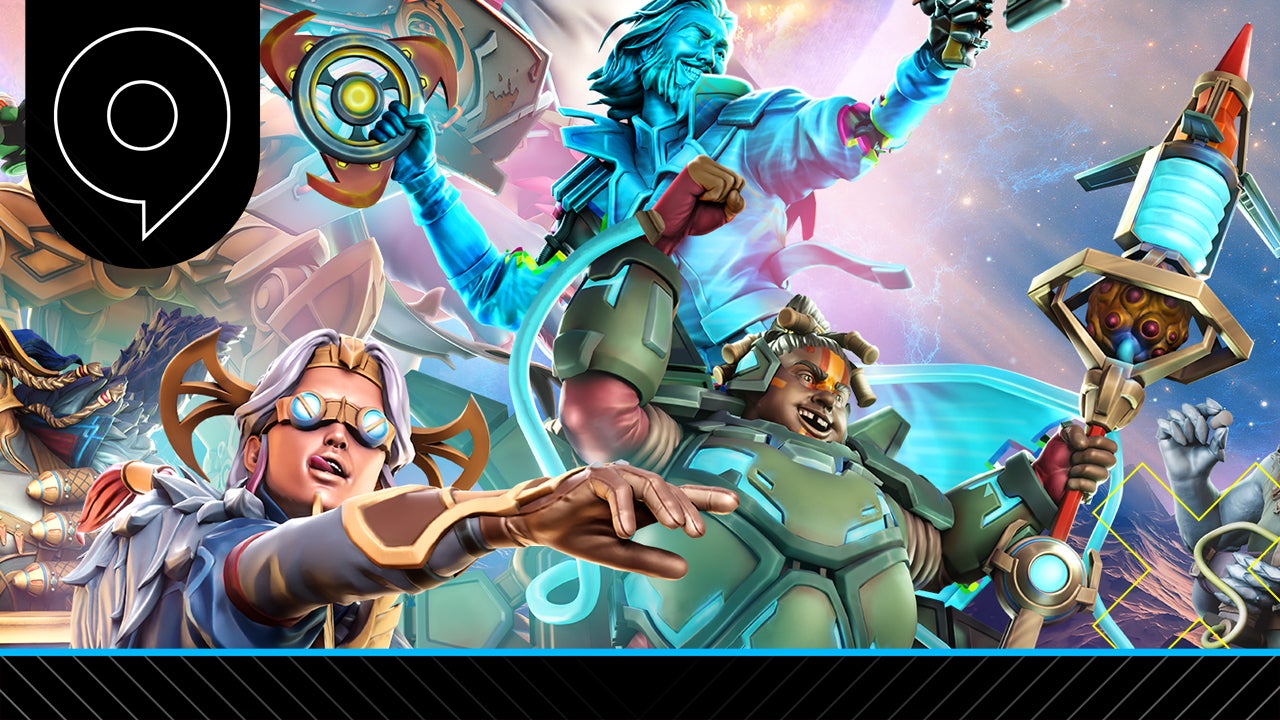 The worlds of board games and video games often overlap. There are three different Warhammer games here at Gamescom 2022, and over the years we’ve seen games like D&D, Pathfinder, and more adapted into a variety of video game forms. But Moonbreaker, from Subnautica developer Unknown Worlds Entertainment, isn’t like any tabletop video game I’ve seen. Rather than live up to tradition, Moonbreaker is literally a competitive tabletop miniatures game played with figures you paint yourself. It’s a celebration of the hobby of painting and playing, and I think it has the potential to be brilliant.

Unlike the games I’ve already mentioned, Moonbreaker isn’t based on an existing board game. It’s all been created from scratch for Unknown Worlds, but it has everything you’d expect from a miniatures game; a strong set of rules for turn-based combat, simple tactical options that integrate into deep strategies, and a collection of cool miniatures divided into different and colorful factions. Its sci-fi universe even has the lore created by beloved author Brandon Sanderson delivered via audiobooks. Effectively, it’s the entire Games Workshop hobby on your PC, just without the Space Marines.

At Gamescom 2022 I was able to play Moonbreaker for an hour, which was enough to complete its quick tutorial and one match of its fast-paced versus mode. I love what I saw, but I’m also surprised by the fact that instead of playing real-life miniatures games like Warhammer or Infinity, Moonbreaker is more similar in design to card games like Hearthstone.

Start with your captain. For me, that was Astra, a boy genius riding a huge frog. He is the most important miniature on the board, because if he dies, the game is over. My opponent (in this case, an AI) also has a captain, Zax Jak’ar, who is essentially a recently deceased Han Solo living a second life through a hologram. To win I must kill him, whatever it takes.

Moonbreaker not only simulates the gaming experience of a miniatures game, but also reproduces the painting side. There is a full set of artistic tools that allow you to bring each character to life in a color scheme of your own making. But this feature doesn’t rely on digital painting tools like you’d use in Photoshop; Replicates real art techniques. There are your regular paints, which block colors, but their opacity can be altered to simulate thinning your acrylics. You can then apply a wash, which shades the recesses and creates contrast. Finally, a highlight coat, added with careful edge highlighting or the easier dry-brushing method, picks out the highest points of the model to create a stunningly detailed paint job in just a few minutes.

I only painted a few areas of Zax’s model, but I was impressed with how well it reproduced real life painting (in only a fraction of the time and without the need for two thin coats). You can even mix new colors in a palette. and save them for later use. The only real concessions it makes are the ability to undo a mistake and mask certain areas of a model so paint doesn’t spill. I can already see myself spending hours painting the Moonbreaker characters, and maybe even using it as a form of prototype paint schemes for my actual miniatures IRL.

Backing up my captain are nine crewmates. They are, in CCG terms, your deck. Like a Hearthstone card, each one has an attack and HP value, plus one or two unique abilities. They also unfold as cards; you have one hand (here known as the Bridge) and you can place a character on the board when you have enough ‘Ash’ (which, like Hearthstone’s mana pool, builds every turn). More powerful allies cost more Cinder, so you’ll need to judge when it’s best to spend or save your resources.

It’s on the board where Moonbreaker begins to separate itself from card games, even if the fundamentals of CCG design still fuel its intentions. Movement and location is initially the most obvious factor. As the corners go by, I start to think more and more about where the Astra should be placed. Putting her on the sidelines keeps her safe from the reach of Zax’s minions and his own dual pistols, but it also means she’s too far away to use her powerful buffs on my other crew members. I agree with the tactical use of the terrain of the board; when placed within the billowing clouds of a steam vent, any attack made against Astra suffers a precision penalty.

It’s on the board where Moonbreaker separates itself from card games, even if CCG design fundamentals still fuel its intentions.

With Astra safe, I need to consider the composition of my ground troops. Zax has deployed his Toxoid, a wasp-shaped brawler that has inflicted one of my crew members with a poison that will kill them next turn unless they heal. To counter this, I deploy my medic, Stitchy McPatchy, who will keep my ally poisoned in the fight. But there is a complication; newly deployed minis can’t do anything until the next turn, but the second I click ‘end turn’, my sick crewman is going to croak. But that’s where Astra comes in; from his new position near his allies, he can use an ability to activate Stitchy right now. Special abilities like these cost Cinder to activate, which means I’ll be too poor to field another model this turn, but right now I’m in desperate need of medical services. I wake up Stitchy and immediately use the last of my Cinder to heal the sick crewman.

It’s a simple synergy, but it indicates how Moonbreaker’s abilities and terrain can influence tactics and ultimately strategy. There seems to be genuine depth and richness here. Zax later summons a crew member who can increase his power with each passing turn. The developer who walked me through the demo warns that if left untreated, this character will theoretically be able to defeat my captain and thus win the Zax game. This character type forces interesting strategies from both sides; for Zax it’s about preserving his new nuke at all costs. For me, do I create a strategy to remove her from the board or double down to end the game by defeating Zax?

I opt for the second. To deal a quick chunk of damage, I call in an Orbital Strike. This is a Ship Assist, one of several abilities that are free to use but must be charged up over multiple turns. This barrage takes four turns to heat up, but it’s ready, so I rain heavy ammo onto the battlefield. But Zax still has a lot of health left, so I have to make a decision on what to do with my Cinder. Do I spend it deploying some new crew members who can attack it next turn, or do I spend it on an ability-fueled tactic that could end the game here and now? I take a chance on the latter and reproduce my deployment/activation plan from earlier, this time with a huge turret. The laser barrage cuts through Zax’s remaining health, sending him into the grave a second time.

It’s a deeply satisfying win, and it’s only my first game. I’m already excited about the possibilities that different crew builds can offer and how various skills, ship assists, and passives can be combined.

But despite this enthusiasm, I’m also a little worried about how I’m going to put together that team. When Moonbreaker launches into Early Access on September 29, it will come with a respectably large collection of miniatures, but that’s just the beginning. That rank will grow and new miniatures will come via booster pack style loot boxes. That means both microtransactions in a premium game and the risk of paid duplicates. While I’m a bit cranky about the extra costs, in theory I’m not completely opposed to buying new minis. But in my real life hobby, I go to Games Workshop and buy the models I want. I’d rather see Moonbreaker follow that model (or even sell pre-assembled gear) rather than the random potluck food that has plagued card games since the hobby began. Fortunately, there is an in-game currency that is earned through gameplay that removes a bit of that blemish on Moonbreaker’s tremendous promise, though the rate at which you earn it will be key.

I may never have a massive collection of Moonbreaker minis, but I’m still looking forward to exploring the depths of these tactical battles and devising diabolical multi-turn plans. I already have several theoretical strategies formulated in my mind, impatiently waiting to be implemented when Early Access begins next month.