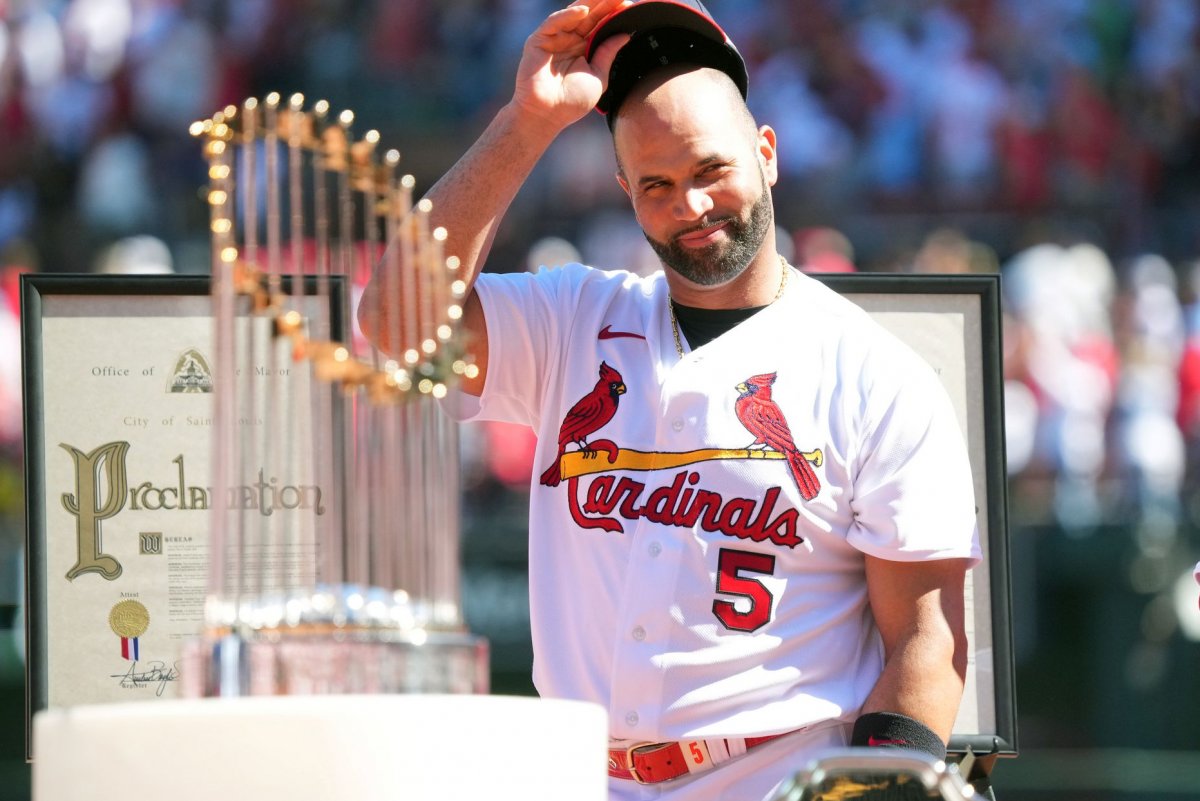 Veteran first baseman Albert Pujols and the St. Louis Cardinals will face the Philadelphia Phillies in Game 1 of an NL wild-card series at 2:07 pm EDT on Friday on ABC. Photo by Bill Greenblatt/UPI | license photo

MIAMI, Oct. 7 (UPI) — The start of the 2022 MLB postseason is set, with a dozen games scheduled as part of the wild-card rounds. The NHL season opener will also top the list of weekend sporting events.

Auto racing fans can also tune in for the Formula 1 Japanese Grand Prix and the NASCAR Cup Series playoffs on Sunday.

But early October means the postseason for America’s favorite pastime, as a dozen teams fill the MLB playoff bracket. The first pitch for the 2022 postseason is scheduled for 12:07 p.m. EDT on Friday, when the Cleveland Guardians host the Tampa Bay Rays in Game 1 of an American League matchup.

The first Guardians-Rays game will air on ESPN. Additional postseason games will air on the same network, as well as on ABC, ESPN2, Fox, FS1, TBS and MLB.TV.

The respective American League and National League Championship Series will have a best-of-seven format and begin on October 18. The best-of-seven World Series is scheduled to begin Oct. 28 and could run through early November.

The Los Angeles Dodgers are the favorites to claim the title. They won an MLB-best 111 games and are the top seed in the National League. The Houston Astros, who have won an AL-best 106 games, have the second-best odds to claim the Commissioner’s Trophy.

The defending champions Atlanta Braves, New York Yankees and New York Mets are among the top 5 favorites to win the World Series.

The St. Louis Cardinals host the Philadelphia Phillies in Game 1 of an NL wild-card series at 2:07 pm EDT on Friday on ABC. The Seattle Mariners will face the Toronto Blue Jays at 4:07 pm on ESPN. The New York Mets will then host the San Diego Padres at 8:07 pm on ESPN in Friday’s cup.

Those series will continue on Saturday and Sunday in the same stadiums.

The Dodgers and Braves received first-round byes, as the top seeds in the National League. The Astros and the Yankees earned the right to sit in the first round of the American League circuit.

San Jose at Nashville at 2 p.m. on NHL Network

Buffalo at Pittsburgh at 7 p.m. on ESPN+

Seattle in Edmonton at 9 p.m. on ESPN+

Women’s Friendly: USWNT vs. england at 3pm on fox

Serie A: Inter Milan in Sassuolo at 9am on Paramount+

Premier League: Wolves at Chelsea at 10am at Peacock

Premier League: Southampton at Manchester City at 10am at Peacock

Premier League: Spurs at Brighton at 12:30pm on NBC

Bundesliga: Bayern Munich at Borussia Dortmund at 12:30 p.m. on ESPN+

Michigan at Indiana at Noon on Fox

Tennessee at LSU at noon on ESPN

TCU in Kansas at noon on FS1

Texas at Oklahoma at Noon on ABC

Missouri at Florida at noon on ESPNU

Ohio State in Michigan State at 4 pm on ABC

Ole Miss at Vanderbilt at 4 p.m. on SEC Network

Washington in the state of Arizona at 4 p.m. on the Pac-12 network

North Carolina in Miami at 4 pm on ESPN2

South Carolina at Kentucky at 7:30 p.m. on the SEC Network

Florida State on NC State at 8 p.m. on ACC Network

Oregon State at Stanford at 11 p.m. on ESPN

Nashville at San Jose at 2 p.m. on NHL Network

Anaheim in Los Angeles at 4 p.m. on ESPN+

Dallas at Minnesota at 6 p.m. on NHL Network

Detroit in Toronto at 7 p.m. on ESPN+

Columbus in Washington at 7 p.m. on ESPN+

Premier League: Liverpool at Arsenal at 11:30 am on USA Network

MLS: Vancouver in Minnesota at 5 pm on ESPN+

MLS: Portland at Real Salt Lake at 5 p.m. on ESPN2

MLS: San Jose in Seattle at 5 pm on ESPN+

Steelers on Bills at 1 p.m. on CBS

Chargers at Browns at 1 p.m. on CBS

Texans at Jaguars at 1 p.m. on CBS

Seahawks at Saints at 1 p.m. on Fox

Falcons on Buccaneers at 1 p.m. on Fox

Titans in Commanders at 1 pm on CBS

Lightning on Guardians (if necessary) at 4:07 p.m. on ESPN