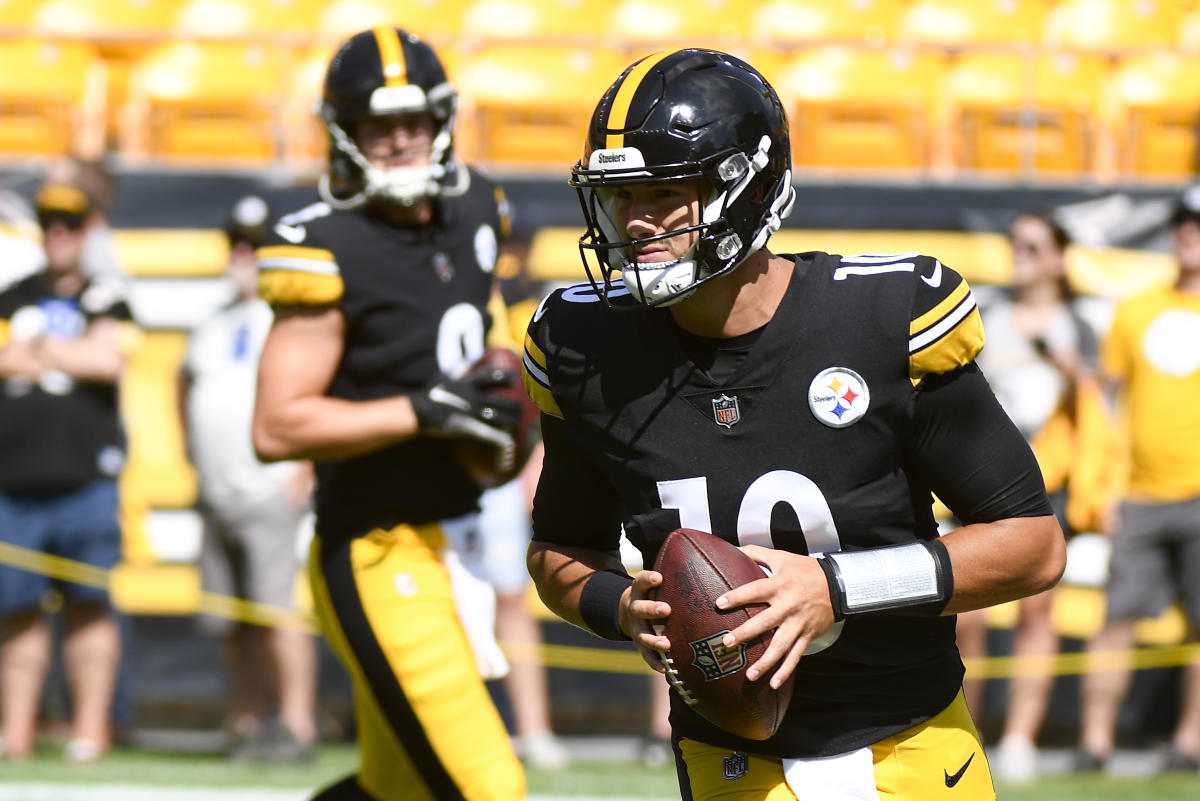 He took less than three quarters in the Pittsburgh Steelers’ home opener. The fans began to sing for the first-round pick of rookie Kenny Pickett.

There will be no patience in Pittsburgh for Mitchell Trubisky. The fan base only knows him from a failed stint with the Chicago Bears and a cheap contract last offseason when the Steelers were figuring out what to do at quarterback after Ben Roethlisberger retired.

Pickett is the exciting new option, and the fact that he played at Pitt makes it even harder for Steelers fans to wait. That’s why the chants weren’t surprising, even if they came so early in the season.

“It is what it is,” Trubisky said of Pickett’s chants, according to the Pittsburgh Post-Gazette. “You just block it and continue playing football.”

Maybe Trubisky is better off playing on the road this week. The Steelers travel to face the Cleveland Browns Thursday night on Amazon Prime in a game between two teams facing offensive challenges.

If the Steelers struggle to score again, those chants will be even louder during their next home game.

When will Kenny Pickett play?

Mike Tomlin doesn’t seem to care much about the pressure of playing the first-round pick at quarterback.

Before the season, it was leaked to Fox Sports’ Jay Glazer that Tomlin’s plan was sit pickett all season. That would be exceptionally rare. Since Aaron Rodgers’ draft year in 2005, only two first-round quarterbacks haven’t started at least one game as rookies. The list is Brady Quinn and Jake Locker. All the others started at least once.

Tomlin may not want to make a change, but he may be forced to. Trubisky has 362 yards and a 76.1 passer rating. The Steelers don’t have a great offensive line, but they do have good position players. The Steelers won’t be able to continue Trubisky for long if he doesn’t even come close to 200 yards per game. Last week, the Steelers didn’t move the ball much in a 17-14 loss to the New England Patriots, and the frustration grew.

Maybe Tomlin is right and Pickett isn’t ready yet. At some point, it doesn’t matter. First-round picks don’t sit down. Trubisky’s reputation as a player, that he didn’t do enough after the Bears drafted him second overall, doesn’t help. Steelers fans are already pushing Tomlin to make a trade. Trubisky knows that he needs to start playing better, and he has to get through soon.

The browns also have offensive problems

The good news for Trubisky is that he probably won’t be outshone by the other quarterback on Thursday night.

The Browns also have their problems offensively, although Jacoby Brissett had a solid game against the New York Jets last week. That was overshadowed when the Browns blew a 13-point lead in the final two minutes.

Cleveland is waiting for Deshaun Watson, who is serving an 11-game suspension. Until then, the offense will be limited. The Browns will rely on running backs Nick Chubb and Kareem Hunt for most of this season, and Brissett will be asked to play his part. That means they’ll be playing some ugly, low-scoring games before Watson returns. They’ll be fine with that as long as they win something and stay in the playoff race.

Brissett doesn’t have a lot of pressure when it comes to losing her job. The Browns have no other viable option. And everyone knows Brissett will be back on the bench when Watson returns. Trubisky is not in that situation. That adds an extra layer of drama to Thursday night’s game.