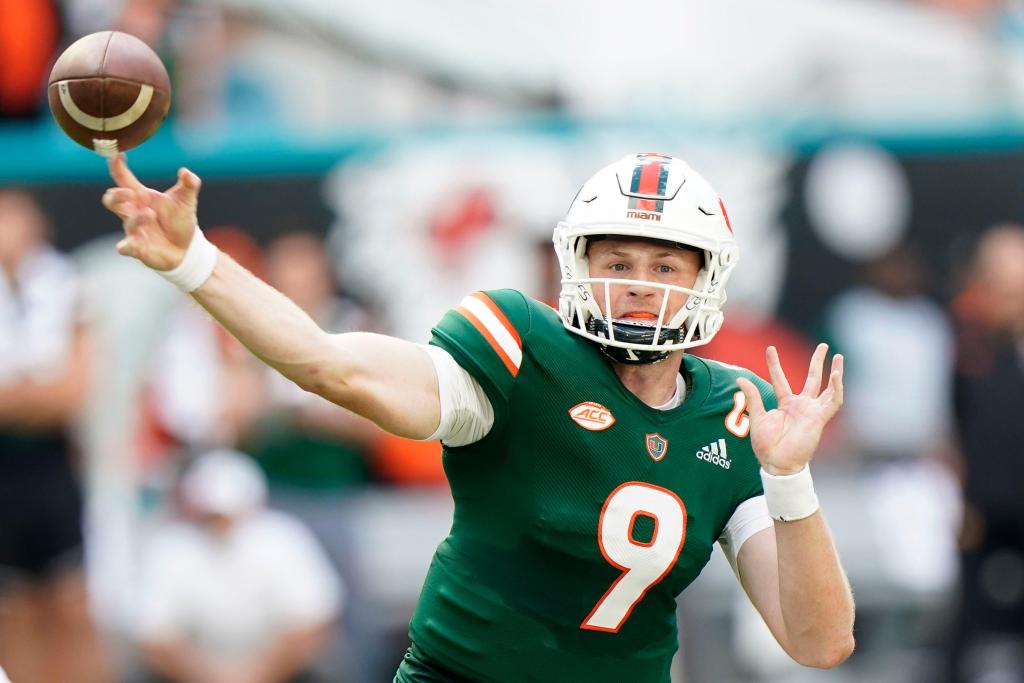 The buzz: After being named the ACC Rookie of the Year last season, Van Dyke is being touted as a potential first-round pick in next year’s NFL draft. If he lives up to that potential, the Hurricanes will be poised for a stellar season.

The buzz: Miami needs to see improvements in their linebackers. Flagg had a breakout season last year, so if he continues to improve, he’ll be a boon to UM’s revamped defense.

The buzz: Stevenson, who transferred from Georgia before the 2021 season, had a solid season in his first year at Coral Gables. Pro Football Focus named him the 10th best returning cornerback in the nation, and he should be UM’s secondary anchor.

The buzz: Zion Nelson gets a lot of attention on UM’s offensive line, but Scaife could be a key player who goes under the radar. He’s likely to line up at right tackle this season after playing primarily right guard last year. Pro Football Focus rated him the ninth-highest rated offensive lineman in pass blocking last season.

The buzz: Mallory, who was an All-ACC preseason selection, will be a big target for Van Dyke. He expects offensive coordinator Josh Gattis to make use of the talented tight end room, and Mallory should be a beneficiary of that.

Miami at Texas A&M, September 17: After a couple of relatively light opponents, the Hurricanes take a big road trip to College Station, Texas, and face a potential SEC title contender. Miami’s performance may set the tone for the rest of the season.

State of Florida in Miami, November 5: Revenge is on the minds of some Hurricanes players after the Seminoles stole what would have been Miami’s fifth straight victory in the rivalry series. Mario Cristóbal lost a game to FSU during his playing days at UM. Let’s see how he does against the ‘Noles in his first game against them as Hurricanes coach.

Miami at Clemson, November 19: If all goes well for these shows, this game will be a preview of the ACC championship game. Media voters chose both teams to win their divisions this year. That backfired for the Hurricanes when they met for the conference championship in 2017. Will this year be any different?

keys of the season

Van Dyke burst onto the scene last year after D’Eriq King suffered a season-ending injury. He excelled under former offensive coordinator Rhett Lashlee. Under new coordinator Josh Gattis, Van Dyke will look to take another step forward. After Van Dyke threw for 25 touchdowns last year, the Hurricanes’ single-season record of 29 touchdown passes, set by Steve Walsh in 1988, is in danger of falling.

2. The entrance needs to improve

Pro Football Focus rated the Hurricanes as the third worst tackle team on FBS last year. That can’t happen again. If Miami wants to be successful, it needs to improve in this critical area. Miami has an entirely new defensive staff, including veteran coaches like Kevin Steele (defensive coordinator), Charlie Strong (linebacks coach) and Joe Salave’a (defensive line). The Hurricanes’ defense should improve with them this season.

3. Other recipients must step up

Miami lost a couple of big receivers this offseason. Mike Harley Jr. and Charleston Rambo set records in Coral Gables, accounting for about 45 percent of the Hurricanes’ receiving yards and 40 percent of their touchdown receptions last season. UM will need to find players to fill that void. Whether it’s returnees Key’Shawn Smith, Jacolby George and Xavier Restrepo or newcomers like Frank Ladson Jr. and Colbie Young, Miami will need production from its receiving corps.