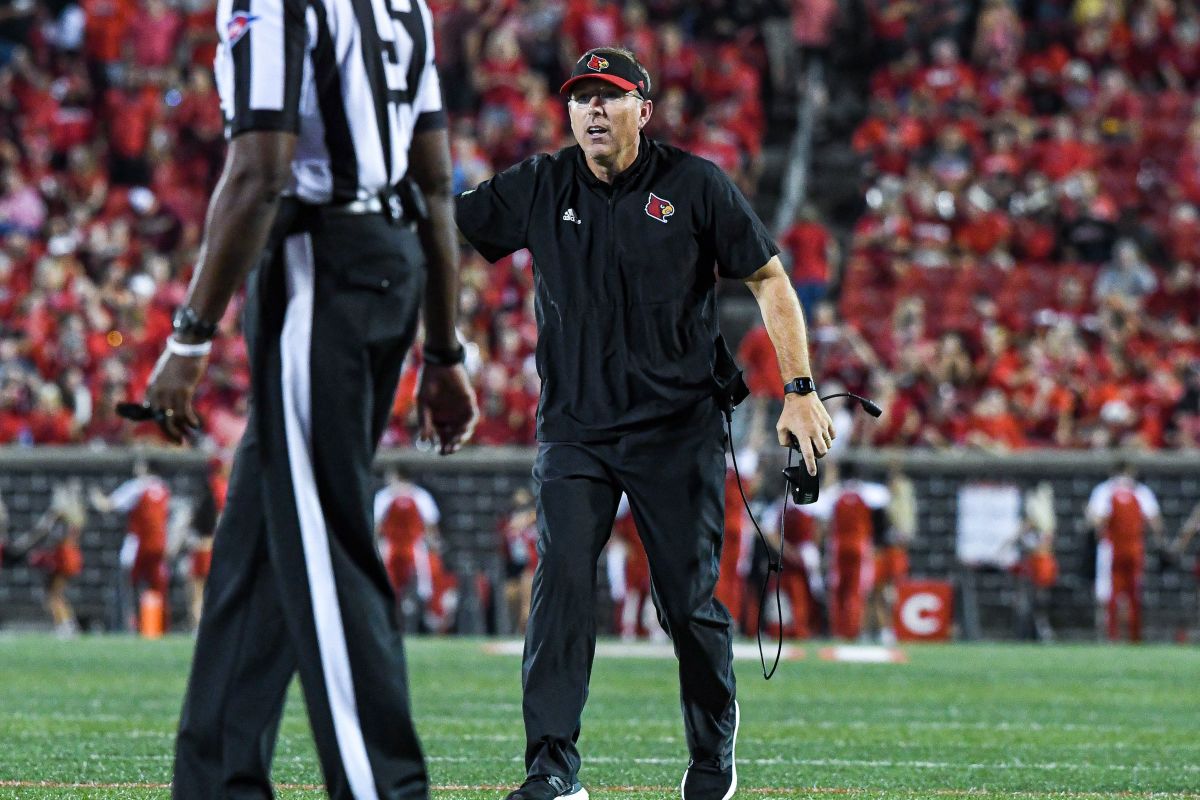 LOUISVILLE, Ky. – I’ll be the first to tell you that I, like many others in the city of Louisville, thought the Louisville football program would be in a very different place than it is now. When I was putting together my fall camp season predictions, I thought Louisville would be 2-1 in its first three games, but there was a very real chance to go 3-0.

I figured, given recent history, they’d blow the doors off Syracuse. I thought UCF was a winnable game, but one that would be difficult given their offensive MO and tough environment on the road. I thought Florida State would be a win, in part because I wasn’t that convinced FSU would “come back.”

I don’t need to spend a lot of time repeating what really happened. A listless blowout against the Oranges, an amazing rebound against UCF, and then a heartbreaking loss to the Seminoles. Of course, Louisville did the exact opposite of what I thought they would do in their first three games. Figures.

It’s not so much that Louisville is currently 1-2, which in itself is bad given what we all think this team might be capable of. No, it is how they have been seen in the process. The offense is struggling to establish some sort of rhythm on a consistent basis, and turnovers have been a common theme in both of their losses. The defense, even with his strong showing at UCF, can’t tackle for dear life. Both sides of the ball can’t seem to stop getting out of their own way with the number of penalties they commit.

What’s perhaps most alarming is that outside of running backs and perhaps the defensive line, neither position group is up to what we thought they were capable of.

Quarterback Malik Cunningham is still an electric running back, but he seems to have regressed as a passer. The offensive line has looked average after being heralded as perhaps the best unit on the entire team. The remodeled open plan reception room has had issues creating separation at times. Linebackers, with the exception of Yasir Abdullah and Ben Perry, have had MAs and missed tackles galore. The air defense has been extraordinarily inconsistent.

As a result, the noise has already started. Sure, Louisville fans got off to an early start after the listless performance against Syracuse, but after the most recent loss to FSU, where Louisville had multiple chances to establish a firm hold and failed to do so, the talk in the hot seat is starting to get louder. get warm. (pun intended).

Is Satterfield in *the* most popular seat in America? Absolutely not. That title is in a three-way possession between Georgia Tech’s Geoff Collins, Auburn’s Bryan Harsin and Colorado’s Karl Dorrell. But when it comes to the hot-seat level of coaches below those three, Satterfield’s name is starting to crop up across the country.

After the Florida State game, a matchup that encapsulated everything that went wrong in the Satterfield era, it’s not hard to see why. Frankly, I’ve gotten to a point where I don’t blame the Louisville fans for feeling that way. The results speak for themselves.

However, they are only three games into the season. By definition, there is still time to change things. But, considering how packed Louisville’s schedule is, there isn’t much time. In fact, the next three games on the Cardinals’ schedule — against USF, at Boston College and at Virginia — could be crucial not only in building momentum down the stretch and salvaging their season, but equivalent in getting Satterfield to get his job. after this season.

First, let’s look at Louisville’s next opponent at USF. While I did highlight a very real possibility that the Bulls would upset because of their running game (you can read that breakdown here), on paper, this is a team Louisville *should* have little trouble beating. Quarterback Gerry Bohanon has struggled as a passer to open the season, and despite some good individual pieces on defense, they’ve struggled to stop anyone.

Related: Behind Enemy Lines: Five Questions For Bulls247’s Will Turner

Now let’s take a look at the next two games: at Boston College and at Virginia. Before the season, I believed these two matchups had “trap game” written on them. I’m really excited about Eagles HC Jeff Hafley and his QB Phil Jurkovec and games in Charlottesville against the Cavaliers have always been weird.

Even with just a sample size of three games, these two games are not only extremely winnable, these are games I expect Louisville to win. Boston College’s offensive line has been absolutely atrocious, almost single-handedly costing them games. Virginia dearly misses offensive coordinator Robert Anae (who went to … Syracuse!), and quarterback Brennan Armstrong, who was one of the most prolific passers in the nation last year, looks almost lackluster.

This is a three-game stretch in which Louisville not only has to go undefeated, but look a lot better in the process. I’m not saying every game has to be a blast, but the energy, effort and execution have to be light years better than the first three games of the year.

Why? Because everything gets much, much harder after these next three games.

After a bye week after the Virginia game, Louisville hosts Pitt and Wake Forest in back-to-back weeks. Have the Panthers or Demon Deacons lived up to their potential early in the season? No, and for various reasons. But, as of now, both are well-deserved top-25 teams at No. 24 and No. 21.

After that, the Cardinals will host James Madison for the final cheat game, then end the season with a killer row: at Clemson, against NC State and at Kentucky.

Clemson’s offense hasn’t been perfect with DJ Uiagalelei under center, but with an absolutely charged defense, they deserve the No. 5 spot in the rankings. Plus, we all know how raucous the Death Valley environment is. No. 12 NC State had to escape East Carolina in its first game, but its defense could challenge Clemson’s in the ACC. Then there’s No. 8 Kentucky, who has been dominant on both sides of the ball. Yes, much of it has been against cupcakes, but Florida is still Florida.

For those counting at home, that’s five teams through the last six games of the year. The bottom three are all in the top 15, with two of those three on the road in well-known harsh environments.

If Louisville has *any chance* to be competitive in the second half of the season and break .500 to get back into a bowl game, it all starts with its next three games. The Cardinals not only have to win all three, but they have to do it in a way that shows there is radical improvement not only with the players, but also with the tendencies of the coaches, especially on offense.

If you drop any of these next three, you can almost kiss a game of bowling goodbye. A Louisville team that many in the preseason, including me, could get seven, eight or even nine wins, might struggle to get even five.

If Louisville gets to that point, then athletic director Josh Heird has a tough decision to make. The Cardinals will have endured their third straight losing season, and even with a top-tier recruiting class on the way, at least for now, there would be little to suggest they’ll develop properly or put themselves in the best position to succeed.

But there is only one thing that guarantees that this decision will not even be put on the table. Or at least for the next three games: heck, maybe even the next six since Pitt and Wake Forest have proven themselves deadly and you’ll be playing them at home.