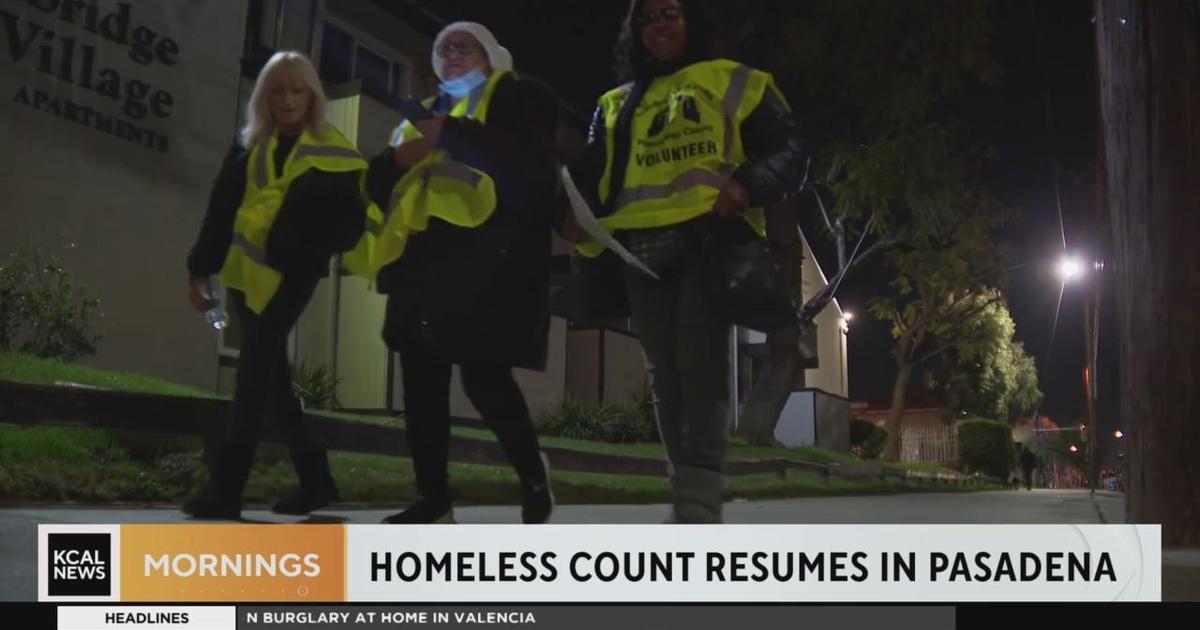 The 2023 Greater Los Angeles Homeless Count, a point-in-time snapshot of homelessness in Los Angeles County that helps determine the distribution of funds and services to the homeless, it began on Tuesday and the count is expected to continue through Thursday.

Volunteers were out Wednesday morning, including in Pasadena, as an attempt to count Los Angeles County’s homeless population resumed for a second day.

“We have been effective in getting people off the streets in recent years, and we are about 50 percent of where we were. But even that is too much,” Pasadena Mayor Victor Gordo told KCAL News. “One is too many. And the numbers are constantly evolving, so we have to keep pushing to keep people out of the streets.”

Because Pasadena is a smaller jurisdiction, they are trying to do a lot of one-on-one interactions with the homeless in the city.

Volunteers distribute cold-weather packs containing toiletries and other items, and ask if people need medicine. Pasadena has its own public health department with Narcan available and vaccination teams on staff to administer covid and flu shots.

This year’s Los Angeles County recount could be of added importance given the priority new Los Angeles Mayor Karen Bass has placed on addressing the crisis since taking office in November. She declared a state of emergency over homelessness as its first official act and has emphasized collaboration with the county and LAHSA, a joint powers authority coordinated by the city and county. The County Board of Supervisors quickly followed up on Bass’s announcement. with its own declaration of a state of emergency, just like the neighboring city of Long Beach.

“Together we are building the indoor safe Camp solution. We’re cutting red tape to build housing faster and at a lower cost,” Los Angeles Mayor Karen Bass said Monday as she introduced Va Lecia Adams Kellum, the new director of the Los Angeles Homeless Services Authority. Los Angeles “And to Dr. Adams Kellum, we are bringing new leadership to LAHSA that is fully aligned with the efforts of the city and county.”

On Tuesday, when she and several volunteers officially started the count, Karen Bass had a message of hope.

“I hope to see people who are still in tents, and I can’t wait until we get a chance to count them and get them out of the tents and into housing,” Bass said. “I’m excited by all the enthusiasm and all the volunteers that I know will be out there.”

The Los Angeles Homeless Services Authority count will be conducted with the help of thousands of volunteers, with results expected in late spring or early summer. It will begin in the San Fernando and San Gabriel Valleys on Tuesday, followed by counts in West Los Angeles and East Los Angeles on Wednesday. Thursday’s count will take place in South Los Angeles, the metropolitan area and the Antelope Valley. Several local officials, including Bass, will hold an introductory press conference Tuesday night at LA Family Housing in North Hollywood to kick off the count.

Wendy Greuel, LAHSA commission chair, said at a briefing Monday that volunteers are still needed to help count. People can register at theycountwillyou.org.

LAHSA announced changes for this year’s count that include the use of a new app and ensuring that counts have access to paper maps and tally sheets if there are internet connection issues.

For the first time, LAHSA partnered with Esri, a company that provides software for a geographic information mapping system, to streamline their efforts during this year’s count.

“The app they use should be a lot easier,” said Ahmad Chapman, LAHSA director of communications. “It really helps us figure out what services are needed where and how to help homeless people get into the shelter and on the path to permanent housing.”

In addition to tracking where volunteers go during their count, the app tracks people, camps, and vehicles across the county to collect as much data as possible.

Agency officials said earlier this month that they also plan to hire a demographer and two data scientists for data analysis.

“I think we’ll see a larger population, I know we’ll count everyone in a shelter and everyone outside,” said Andy Bales, Union Rescue Mission president and CEO. “I can tell you firsthand that we have more families than ever before. We have over 250 families at our three sites with 500 children, which is an all-time record.”

While it is extremely difficult to accurately count all the homeless in Los Angeles County, Bales is optimistic about the future with Mayor Bass’s directives already being put into effect.

“We just have to listen to Mayor Karen Bass when she says we don’t just need housing, we need mental health support and addiction recovery services,” she said.

Last year’s count was followed by criticism from some officials, including City Council members, who pointed to problems with access to data related to the count and inconsistencies in communication between the agency and council districts. Some council members called for a third-party count of Los Angeles’ homeless population and a multi-year audit of the authority’s previous counts.

KCAL’s news staff is a group of experienced journalists who bring you content from KCALNews.com and CBSLA.com.