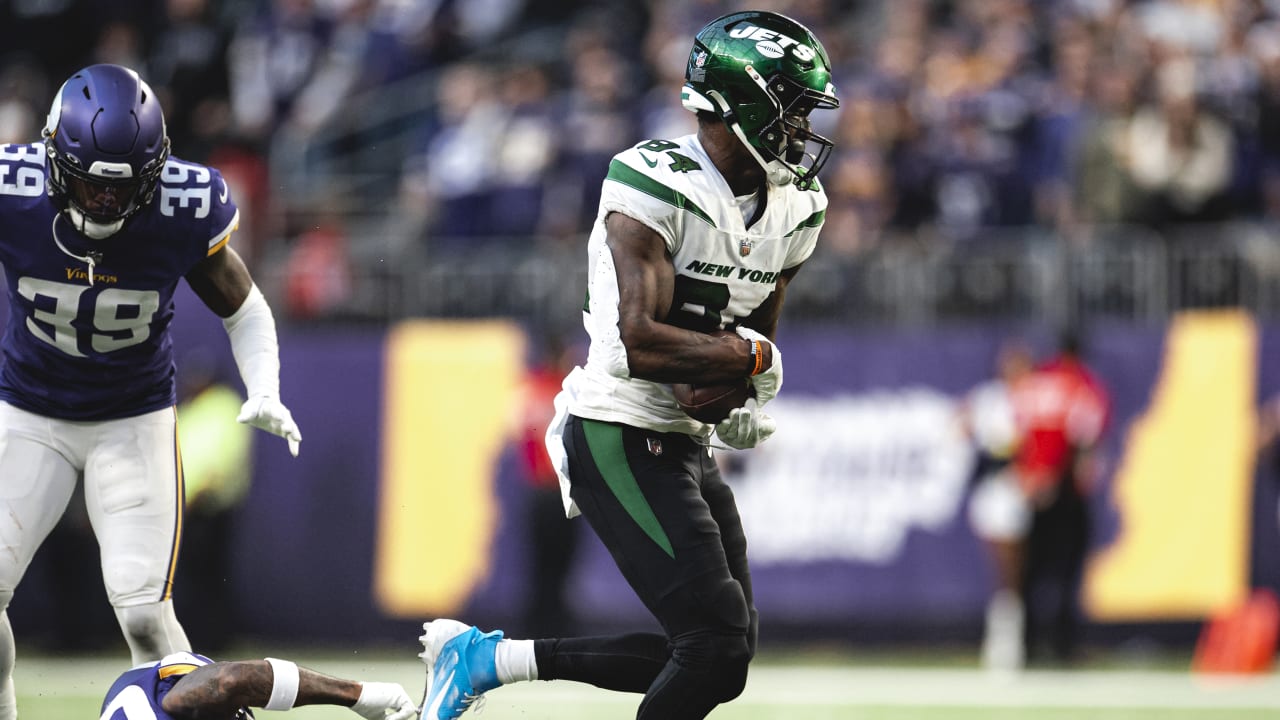 Few good omens in a slow first half
The game started off a bit slow and perhaps a bit nervous for White. He connected on his first two passes of the game, but the third was deflected off WR Corey Davis and into the hands of Vikings S Hunter Smith, with the return to the Jets 34. The Green & White defense held on three plays, but K Greg Joseph, who had missed all five of his previous kicks from 50-plus yards, nailed this one from 51 yards out for a 3-0 lead 2:22 into the festivities.

The Jets responded in a similar fashion, driving a 45-yard drive to Greg Zuerlein’s reach, with “Legatron” coming in for a 48-yard field goal to tie the score 3-3.

Both quarterbacks were on target for the remainder of the first quarter. Cousins ​​started 0-for-5 and connected on one of the first eight passes from him. But he completed his final two of the quarter and continued that streak in the second quarter as the Vikings drove to RB Dalvin Cook’s first-round 4-yard touchdown run and goal for a 10-3 Vikings lead.

Key in these plays by the home team were some plays against the visiting defense. The Jets had come into the game on something of a penalty diet in the last four games and with nothing called against the defense in the previous three games. But three of the four starting DBs were hit with yellow flags: CBs DJ Reed and Sauce Gardner for holds and S Jordan Whitehead for unnecessary roughness with a high blow on Justin Jefferson in the TD series.

The Vikings continued to slowly take over in the first half, with Cousins ​​facing a big run from DL Nathan Shepherd to find WR Jalen Reagor on the deep cut for 38 yards to the Jets 24. That set up the first down 14 of Alexander Mattison. -yard TD stormed in with 3:35 to play in the first half for a 17-3 lead.

Then Robert Saleh, OC Mike LaFleur and the offense gambled, deciding to go for it on fourth-and-2 from their 43rd at the two-minute warning. White’s pass could not be forwarded by TE Tyler Conklin. The Vikings took over in good field position with three timeouts remaining. They moved 17 yards before Joseph entered for a 41-yard field goal and a 20-3 lead with 40 seconds remaining.

With two timeouts remaining, the Jets tried to close in on a long-range 3-point attempt by Zuerlein. They crossed midfield to the Minnesota 42 with 13 seconds left. It seemed Saleh didn’t think they were close enough for a Zuerlein try, but the Vikings called a timeout, Saleh reconsidered and sent “Legatron” to try to convert the first 60-yard FG in franchise history.

And Zuerlein converted with room to spare. The kick not only set the franchise record (breaking Chandler Catanzaro’s 57-yard mark in 2017 and matched by Zuerlein twice this season), but it also rescued the Jets from a bad late-half scenario and also reduced its deficit. to 20-6 when the teams entered the US Bank locker room.

The Vikings then got the ball to start the third quarter, but the Jets defense, under pressure in the first half, hit their first 3-pointer and it was out of the game. A disastrous scenario around halftime was mitigated. Now all the Jets had to do was figure out a way to get two more touchdowns than the Vikings in the final 30 minutes of the game.