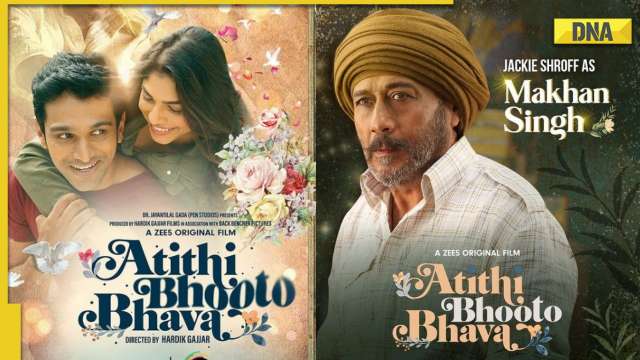 Where to watch: ZEE5

Synopsis: A ZEE5 exclusive film, Atithi Bhooto Bhava is a story of Srikant Shirodkar [Pratik Gandhi]a witty comedian who takes his relationships for granted, even with his beautiful girlfriend Netra Bannerjee. [played by Sharmin Segal]. Things change when a Ghost named Makhan Singh [played by Jackie Shroff] he enters their lives and asks Srikant to fulfill a promise made by him. A confused Srikant realizes that he has been reborn and that he was Makhan Singh’s Darji (grandfather) in 1975. The film explores the journey of two love stories in different time zones and how Makhan Singh helps and guides Srikant in their relationship. with Netra.

Atithi Bhooto Bhava is a unique love story of a middle-aged ghost Makhan Singh, played by veteran actor Jackie Shroff. The film revolves around Makhan Singh, who is searching for the love of his life Manju, played by Simran Sharma, after 5 years of his death.

In 1975, Makhan Singh, very close to his grandfather, was deeply in love with Manju. After the death of his grandfather, Makhan never confessed his feelings to Manju and died at the age of 55. One night he meets comedian Srikant Shirodkar played by Pratik Gandhi, who used to make fun of his girlfriend and his relationships. There is a connection between Srikant and Makhan. Of course, I won’t tell you the connection between the two, but trust me, the bond they share with each other will make you smile.

Returning to Srikant Shirodkar, the witty comedian always takes his girlfriend Netra Bannerjee (played by Sharmin Segal) for granted. His life suddenly changes after the ghost Makhan Singh starts living in his apartment. The movie is a romantic comedy-drama that is sure to keep you hooked. Atithi Bhooto Bhava is a revelation for all those people who do not value their relationships.

The theme of the film is not new to the audience, but it is an enduring love story that is sure to melt your heart. The main cast of the movie is amazing, they sync up well with their characters and you will have feelings for them. Unsurprisingly, Jackie is the soul of the film. Pratik Gandhi, known for his starring acts in his previous projects, has, as expected, done a commendable job as an actor. Apart from Pratik and Jackie Shroff, other stars like Sharmin Segal, Divinaa Thackur, Simran Sharma are outstanding.

The surprisingly unpredictable ending of the film will leave you emotional and happy.

The movie is now airing on ZEE5 and is a perfect weekend treat for your family.