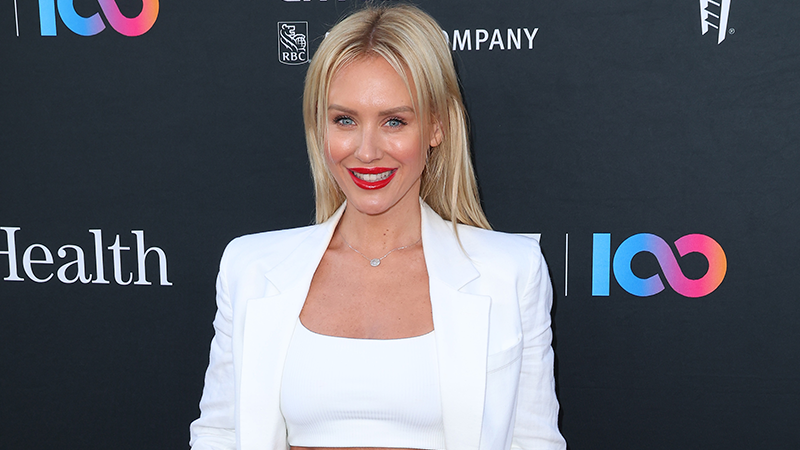 ComingSoon Editor-in-Chief Tyler Treese spoke with Man eater star Nicky Whelan on filming on the water and the enduring appeal of shark movies. Man eater releases in theaters, digitally and via video on demand today.

“Jesse and his friends’ idyllic island vacation turns into a terrifying nightmare when they become the target of an unrelenting great white shark,” reads the film’s synopsis. “Desperate for survival, she teams up with a local sea captain to stop the vicious man-eater before he strikes again in this gripping thriller.”

Tyler Treese: Shark movies are always so much fun. What do you like most about this film genre?

Nicky Whelan: Well, shark movies come out every year, and they’re always a hit and people love them. There’s only been this obsession with shark movies, I think since Jaws. So when this crossed my lap, I thought, “I’m absolutely going to be in a shark movie. Let’s do it.” It was a challenge. It was an independent movie that was made in 18 days on a low budget with a mechanical shark, and we did it. We did it and put it together and it was a really amazing experience.

The actors’ reactions are so important in these movies because it’s obviously not a real shark. Having that mechanical shark, how can you really sell looking so terrified? Because it looks great in the movie.

Oh thank God! You’ll see in the movie that a CGI shark was also used for a major part. Mechanical sharks are incredibly difficult to use. It’s extra work, and Justin, our director, insisted on using it because there’s an old-school sense of realism. I dont know; There’s something really authentic about doing that that makes the movie-making process so great, but makes it more challenging. The conditions we were working in were pretty harsh, to be honest. The rough waters, the heat, the time of day, the beach we shot on was very close to the airport. The water was pretty crazy. It was [an] exhausting process and a great exhausting process that we went through. So the kind of not being afraid of anything in front of us… I don’t know. I guess that’s the part where we really have to be acting and looking scared, but we were exhausted and the conditions were tough. So I think that helps a little bit to make these movies when you’re in some pretty wild places.

You mentioned filming on the water. That has to be so hard. Did you find that process rewarding?

It doesn’t even look like it, but we couldn’t see the bottom of the ocean. In some areas, the water was very choppy. The water would go from a beautiful calm calm to a hectic madness at lunch time. It was hot and stinky weather. I was breathless. I was absolutely exhausted. The local team that worked with us, the lifeguards were amazing. So I always felt safe, but I was very tired and emotionally drained. Swimming in the water all day… it’s like when you’re a kid and you play in a pool and you come out and you’re really hungry and tired, that’s all the time, you know? So I’d collapse on the beach, we all would, and then I’d think about those guys with the mechanical shark, holding that huge puppet, and then having all the camera crews in the water. I mean, everyone really showed up. It was complete, no joke.

You have done martial arts training. What has been the most rewarding part of your martial arts journey and how has it helped you in acting?

I had taken lessons some years ago, in jiu-jitsu, but it’s not my choice, it’s mainly boxing, which I do as a form of physical conditioning. But since I said this a couple of times today, I look fit on my Instagram and do a little bit of boxing and some stuff… you throw someone in the ocean who hasn’t swum in a minute, and I consider myself a good swimmer: this really kicked my ass. At the end of the afternoon, these days of shooting in the water in Man eaterI was absolutely exhausted. It really kicked my butt. Now I know that if I’m going to do another movie on the water, I’m going to need a different kind of physical preparation. I wasn’t too physically prepared for this, but it was good because it pushed me and I felt very rewarding when I finished this movie for sure.

Your character is going through a lot. Her friends take her on vacation to put her in a better mood and obviously everything goes wrong. So what did you find most interesting about the script for Maneater?

Well, you know, that’s the thing. She starts out so broken and we’ve all been through heartbreak at some point in our lives. She leaves you so open and so hurt at times, and even your friends jumping happily around you can’t get you out of it. So when this shark rocks, it’s do or die. She pulls her out of it so quickly and really turns her into this huge version of herself that she maybe needed to become. Hers Loses everything, from all of her friends to her fiancé, in a very short period of time, incredibly traumatic for her. So the comeback that I do, or the one that the character does, was kind of fun. I mean, although it’s hard to portray that in such a short period of time, that comes after the shark and jumps with it at the end and brings it, come on. It’s a little unrealistic, but it’s also super fun, and that’s the beauty of making movies: you can jump in the water with a fake shark and face it and it feels kind of rough. So it was great.

The telenovela Vecinos came to an end recently and you had a great time. Since that was your big break, how do you remember that show now that it’s over?

I have such fun memories of being in neighboursand obviously, [I’m] So incredibly grateful that they took me in when they did with no acting experience. I auditioned for that show. I always wanted to act, I was a TV presenter before that. That was the opening for me on so many levels and I loved it. I’m still friends with the people on the show. Seeing it finish was very emotional. Watching the videos from that time of my life. I mean, that was 16 years ago for me and it all started, you know? I didn’t want it to end, even though I don’t live in Australia anymore and I’m not on the show. It’s just that comfort of knowing neighbours It was always there. So I only have good memories.

The first thing I saw of you was the last season of Scrubs, which I thought was a lot of fun, despite the big changes. What are your memories of working on that show?

Jumping into such a popular show… we changed the dynamic of that, [which] It is always risky to see how the public embraced us. Being an Australian girl coming onto an American series that is a comedy stage, working with amazing comedians, writers and directors, it was no joke. He was super nervous going on that set and comedy is hard anyway. So I wasn’t a major character in that. I was in a lot of episodes, but I didn’t have a lead role. So I was able to gracefully walk into an environment without too much pressure and really see how things work. scrubs It’s great. It’s sad that it didn’t continue, but I really think if you look at the characters that appeared in that season, they’re all doing very well now and they’re very, very good actors. Obviously Donald Faison and Zach Braff, who are legends who kept the show afloat…so I was excited to be a part of scrubs, and Bill Lawrence was so badass: the creator. So it was a good start for my career in America for sure.

Hall Pass recently celebrated its 10th anniversary last year. How do you remember that experience?

I really had to go to war for it and audition for it and fight for it. To walk on set with the Farrelly brothers, who to this day are still like family, and to work alongside Owen Wilson, being so young and so new to America… trust me, I still look back and say , “wow, I had the balls to do that!” I mean, half the time, I felt like I had no idea what I was doing. I knew I loved everything and I was excited and there’s some beauty in being young and having a little bit of naivete about the whole thing. So I look back and I still wish I had done more comedy. I love comedy so much. It was definitely a great moment in my career.