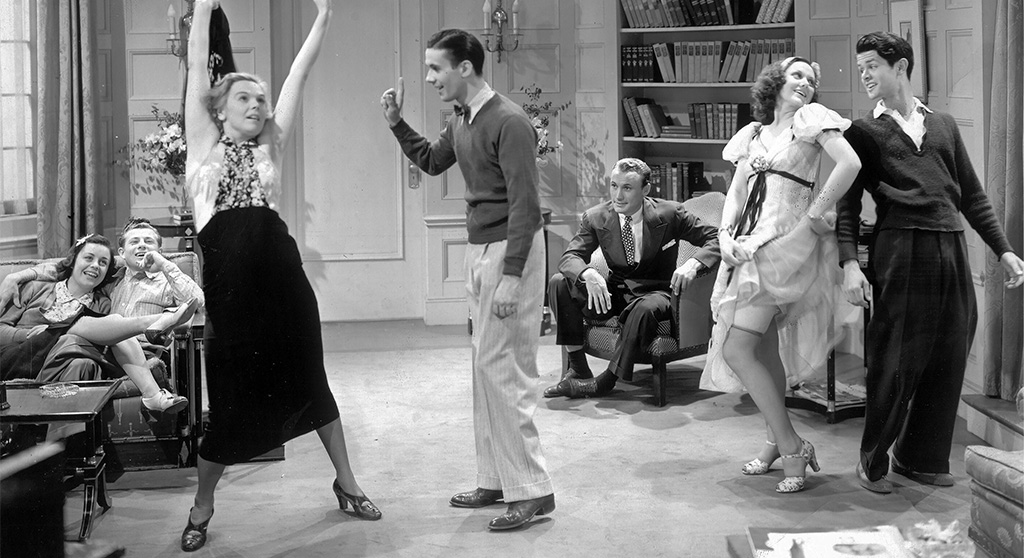 Film Ahead is a weekly column highlighting special events and repertoire programming for Camberville’s discerning movie buff. It also includes movie capsule reviews that are not feature film reviews.

The cult fare playing on The Brattle Theater as part of the “Midnighters” series it has the propaganda film turned stoner anthem “Refer Madness” (1936) paired with Jimmy Cliff’s Rasta classic “The Harder They Come” (1972) on Thursday. The Judy Garland Centennial Celebration continues Monday and Tuesday with George Cukor’s 1954 version of “A Star is Born” (the movie has been made five times; this is the third) with Garland’s next actress falling in love with James Mason’s fading star wrestling with the bottle.

On the list of special engagements, The Brattle has a new restoration of “Daisies”, the 1966 film by Czech director Věra Chytilová, in which young women named Marie (a blonde, played by Ivana Karbanová, and a brunette, played by Jitka Cerhová) decide to take their slice of life’s pie by partying and scamming older men. Shades of Harmony Korine’s “Spring Breakers” (2013), without a doubt. Don’t believe me, just check out Chytilová’s 1992 effort “The Inheritance or Fuckoffguysgoodday.” Making a perfect theme match with “Daisies” is Alli Haapasalo’s “Girl Picture” area premiere. The film about three girls who daydream during the dark Finnish months and “Daisies” will run from Friday. For Labor Day weekend, it’s a three-day performance of Charlie Chaplin’s depression classic “Modern Times” (1936), the actor/director’s last stint as the Little Tramp as a cog in a factory that never stops and a thorn in the side of management. side. (tom meek)

The summer-themed repertoire programming at the Somerville Theater concludes this week with Tuesday and Wednesday showings of Robert Altman’s sardonic take on American culture and politics, “Nashville” (1975), contrasting the populist campaign of a presidential candidate and the city’s music industry titled . The film features nearly two dozen main characters whose lives intersect, a storytelling technique that Altman mastered and capitalized on in later projects “The Player” (1992) and “Short Cuts” (1993). The excellent ensemble includes David Arkin, Barbara Baxley, Ned Beatty, Karen Black, Keith Carradine, Geraldine Chaplin, Shelley Duvall, and Lily Tomlin. Carradine would win the Oscar for Best Song, and the film competed for Best Picture against some very stiff competition: “Jaws,” “Dog Day Afternoon,” “Barry Lyndon” and the winner, “One Flew Over the Cuckoo’s Nest.”

This week’s “Happy Birthday, Mr. Hitchcock” offering, part of Retro Replay Tuesdays at the Kendall Square Iconic Cinema – is “Vertigo” (1958), one of the director’s most popular films. It’s about a former police detective (James Stewart) with a deathly fear of heights who is hired to prevent the suicide of an old friend’s wife (Kim Novak), but as with most of Hitch’s films, not everything is what it seems. Acrophobia, and the sense of it, plays a big part, as does the score by longtime Hitch collaborator Bernard Herrmann. His frenetic use of the violin strings made the shower scene in “Psycho” (1960) so frenetic and chilling, and he composed the music for Martin Scorsese’s “Taxi Driver” (1976) just before Scorsese’s death. the. (tom meek)

In theaters and streaming

As the film diary puts it: “When Robert, a high school student and aspiring cartoonist, rejects the comforts of suburban life, drops out of school and leaves home, he finds in Wallace an unwitting teacher and an unwitting friend, a former low-income student. level comic artist.” That would be so, if it were that simple. This navel-gazing coming-of-age tale plays like a self-indulgent student film, only with a (slightly) bigger budget. As is sometimes the case with rookie outings, Owen Kline’s first feature film has a script lacking in structure, play and wit, and his direction is almost non-existent. It’s like watching a program put together by a community cable television class. If Kline’s story had gotten anywhere, it might have piqued our interest. Instead, it’s stuck in neutral, with Robert (Daniel Zolghadri, “Eighth Grade”) moving from scene to scene with a puzzled expression. More attention to visuals in a cartoon movie would have been nice, but the camerawork here is uniformly sloppy, the images flat and washed out. There are endless close-ups of Robert’s obnoxious entourage (a creepy middle-aged landlord who sweats profusely, a best friend with a bad case of acne, an artist with a lip and a speech impediment, not to mention half-naked and hairy. with morbid obesity). -elderly mentor). They all seem to have been chosen less for their acting skills than their weird looks. “Funny Pages” lurches and stumbles throughout its mercifully short 90 minutes, and when the meaningless denouement arrives, there’s a sense of relief at the prospect of finally turning the page on this unfunny mess. (Frederick Muchnik) At the Landmark Kendall Square Cinema, 355 Binney Street

People who enjoyed Javier Bardem’s villainous turns in “No Country for Old Men” (2007, for which he won an Oscar) and as Bond’s rubbery foe Silva in “Skyfall” (2012), should enjoy his effort in this corporate shark photo of screenwriter and director Fernando León de Aranoa. Blanco, benevolent in appearance, runs a Spanish company that manufactures industrial scales. “Sometimes you have to trick the scale to get the exact weight,” he says. The same could be said of his conduct. A nominee for a business excellence award, Blanco engages in inappropriate relationships with young female employees, and his seemingly gregarious magnanimity turns out to be a veneer for a smarmy, ego-filled agenda. When a fed up employee (Óscar de la Fuente) gets angry and forms a protest line outside the factory, the prospects of winning the prize begin to fade and Blanco begins to fall apart. Thoughts of Gordon Gekko or “Margin Call” (2011) are apt, but de Aranoa is more interested in plumbing the soul of a deceitful guy who wants to appear different – think of our former US president if he had charm and style . The script runs a bit off the page, but that doesn’t matter; Bardem, so good at getting into his characters, keeps it all together with a venomous charm. (tom meek) At the Landmark Kendall Square Cinema, 355 Binney Street

John Hamburg, the occasional writer-director behind the “Meet the Parents”/”Fockers” movies, kicks off this inert poop-fest starring Kevin Hart (“Jumanji”) and Mark Wahlberg (“Ted”) as the best friends of lifelong Huck Dembo (Wahlberg getting the WTF name) and Sonny Fisher (Hart), a stay-at-home dad who thinks his wife (Regina Hall, “Support the Girls” and “Honk for Jesus. Save Your Soul next week) may be having a thing with a new-age philanthropist who solicits his architectural expertise 24/7. By Huck 30, Sonny nearly died sliding down a cliff in a full-body suit; now, for his 44th, he wants his own private Burning Man from him. A loan shark with a hammer-wielding enforcer, mouth-to-mouth with a turtle, and bizarre fecal pranks make their way into this flaccid stab at comedy. The little race games and LQBTQ portrayals are curious at best, if not ill-advised, and even the majestic John Amos (“Good Times,” “Coming to America”) is wasted as Hall’s father constantly on a screaming match over nothing with Hart’s Sonny. (tom meek) on Netflix.

Tom Meek is a writer who lives in Cambridge. His reviews, essays, short stories, and articles have appeared in The ARTery, The Boston Phoenix, The Boston Globe, The Rumpus, The Charleston City Paper, and WBUR’s SLAB literary magazines. Tom is also a member of the Boston Society of Film Critics and rides his bike everywhere.