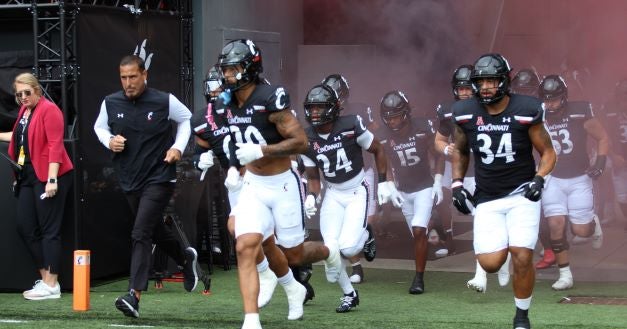 Here it is. After a season full of twists and turns, the Cincinnati Bearcats will try to win a regular-season AAC title and a chance to host the conference championship game in 8 days when they take on Tulane at historic Nippert Stadium on Friday night. afternoon.

The game will air on ABC with the radio call on 700 WLW. Dan Hoard and Jim Kelly are on the call.

Given the uncertainty in the most important field position in the biggest game of the year, I’m probably more worried before a game than I am all season the night before kickoff. Evan Prater, possibly making the first start of his career against a tough Tulane defense, will do it for you.

That being said, UC still has outstanding defense and an even better special teams unit. I think we have a low scoring fight and until the Bearcats lose a game at Nippert Stadium, I’ll believe it when I see it. Especially with a lot of guys from that show turning around the class of 2018 looking to come out perfect on their own turf.

I have no idea what to expect in this game. For the past several weeks, he had hoped to pick Tulane to come into Nippert and end UC’s streak and hopes of a third straight AAC title. But I can not.

No matter who is quarterbacking on Friday, I expect the Bearcats to generate enough offense to get the win. Tulane has an impressive road win at Kansas State this year, but that was two months ago. The other big test the Green Wave faced was that they failed miserably at home against UCF. UC is better at Nippert and I expect this to prove itself on Friday.

Reasons? I have nothing but Luke Fickell and Nippert. Bearcats take it out 27-24 and hosting a third straight AAC Championship game next weekend.

I really think this game will come down to the last possession. Both defenses will go out and do their job as they have all season and with a question mark at Cincinnati’s quarterback position, I hope the offense can do theirs. I cross my fingers for this one.

So many variables. I just do not know. We did a good job holding off Tulane a year ago, but they were playing without quarterback Michael Pratt. We’re really going to need to win on the defensive line and blow up some things, but then also keep Pratt from working independently on anything that hurts us. As for the Bearcats, a lot can happen. Both teams have formidable defenses that keep the score low, so I’m going to say the team that limits their turnovers wins. The Nippert effect gives us that extra turnover we need.

The stakes are high on Black Friday for both Cincinnati and Tulane. I hope that both teams play their most intense soccer game of the year, reflecting the importance of the game. My very simplistic scouting report on Tulane tells me they have an excellent quarterback and extremely good training. But I don’t think they generally have the caliber of athlete that Cincinnati has. And I think at some point in the game that will be the difference PLUS my faith in Coach Fickell, especially at our home … Nippert Stadium.

Bearcats victorious in a close match over a very good Green Wave team… 24 to 21.

This game scares me. I really like The Bearcats will need to break the 30-point barrier, regardless of who takes the plays, as I think Tulane will eclipse 30 on this one. Taking care of the football will be paramount if Cincinnati wants to protect Nippert’s winning streak. The defense will need to find a way to stop the run without giving up air in return. With their backs against the wall, CLF and company will find a way.