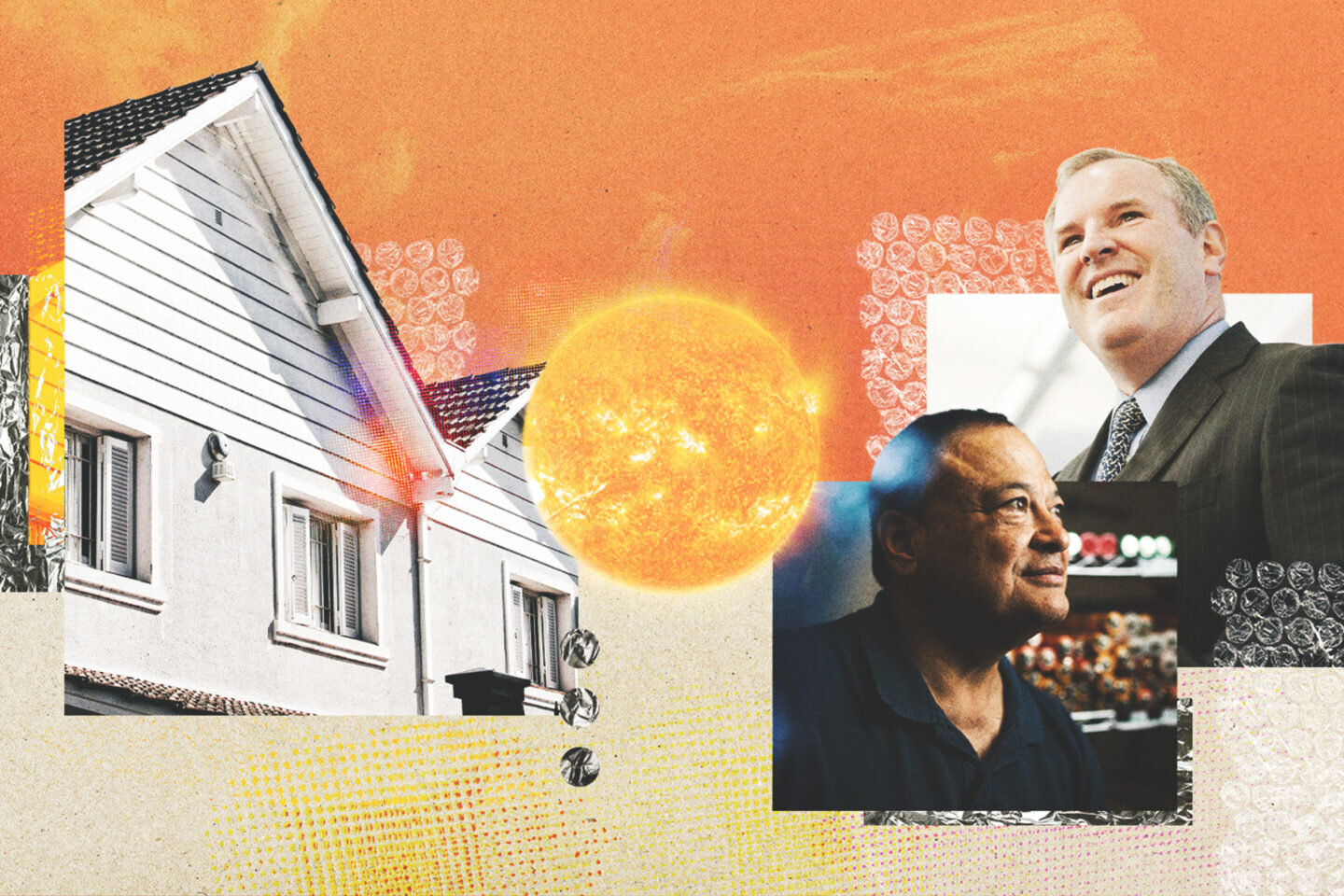 Summer is over, but memories of the season’s historic heat waves are seared into our consciousness.

Before the next scorcher comes, next week? Next year? Consider these strategies from Northeastern professors on the projects you need to tackle now and the supplies you need to have on hand to stay cool and protect yourself and your loved ones.

With climatologists saying extreme heat waves may be here to stay, as US Today reports, experts also outline collective and regulatory measures to de-stress the power grid and keep air conditioning running.

Control your albedo, paint it white

People in hot climates know that painting their houses white keeps them cooler on the inside.

That’s because the color white has a high degree of albedo, a term that describes solar reflectivity, says Eugene Smotkin, a Northeastern professor of chemistry and chemical biology.

Snow and ice also have a high albedo content, while black asphalt has a low albedo content, one of the reasons reporters like to cook an egg on the roads during heat waves, he says. Smotkin.

If time and money are of the essence, you can do what he used to do with an overly sunny lab window in Hurtig Hall: cover the east-facing windows with aluminum foil, shiny side out.

“I was able to solve a problem quickly,” says Smotkin.

It works most effectively with the aluminum placed outside the window, he says.

Using reflective material within the building space allows too much light to penetrate and dissipate into the building, which is why curtains and blinds help a little, but not much, says Smotkin.

Residents of high-rise buildings and others who cannot access the outside of windows can use reflective material, such as cardboard-backed aluminum, inside windows to dissipate heat.

To maximize cooling, insulate the inside of the window with aluminum foil using whatever suitable product you have on hand, says Smotkin. He lined the inside of his lab window with bubble wrap until the air conditioning system was upgraded.

“I’m not saying live this way,” says Smotkin. But during blackouts and blackouts, a little MacGyvering can go a long way.

For those who are less willing to make do and are willing to spend the money, “there’s something called insulated aluminum foil,” says Smotkin. “Nothing beats that when you put it on the outside or inside with the shiny side out.”

More permanent solutions, like the foil-lined roof that covers your home in Puerto Rico, are commercially available and aesthetically pleasing.

He also recommends that everyone do what he did and reserve a room in their house or apartment as a “safe room” where all doors and windows are locked and the air conditioner only has to cool a small area.

If the power goes out completely, Smotkin uses what he calls a “swamp cooler” to cool down the small space. In desperate situations, the battery-powered device is “extremely effective,” he says.

There are many websites and youtube sites online that show how to build what is also known as an evaporative cooler.

Smotkin says that air blown over a water-saturated cooling pad in a five-gallon bucket perforated with holes can cool the air leaving the pump to less than 70 degrees.

People can substitute a towel for the cooling pad, he says. A 12-volt battery, an aquarium pump, a five-gallon bucket with holes drilled halfway down the side, a fan, and water make up the rest of the homemade cooler.

“This is so easy to build,” he says. “You’ll chill your safe zone.”

People can also use 12-volt vehicle batteries to run the cooler, says Smotkin. “Don’t be too technologically proud.”

He says he’d love to see people hand out coolers to older residents during heat waves.

And on a societal level, Smotkin says it’s time to get our albedo under control by developing plans to make surfaces around cities more reflective and less absorbent of radiant energy.

“If the city distributed insulation paper, it could probably reduce blackouts,” says Smotkin.

“It’s probably expensive,” he continues. “But if demand were to go up, prices would go down. No doubt distributing to the elderly and getting young students from the Northeast to install would save some lives.”

Everyday conservation efforts are too overlooked, says Stephen Flynn, founding director of the Institute for Global Resilience at Northeastern.

“We don’t do this routinely,” he says. “Conservation measures are promoted as emergency measures.”

In the case of California’s record-breaking September heat wave, the public’s cooperation with conservation efforts prevented the grid from going down during what could have been a life-threatening event, especially for frail older people and the people with health problems.

Conserving energy and water on a regular basis will decrease stress on infrastructure, Flynn says.

And speaking of infrastructure, it’s time for new rules, he says.

The idea is to use sustainable energy sources, such as solar power, locally and then send the surplus back to the main grid for wider distribution.

Utilities and governments need to figure out how to make the mesh economics work, says Flynn. More alternative energy sources may mean fewer customers requiring services from the larger utilities, which must remain economically viable to supply power to industry in California, she says.

The measures are necessary, with more than 7,000 daily temperature records broken this summer, according to The Washington Post. California’s capital city, Sacramento, hit 116 degrees in September.

“The race is on to see if we can pull this off,” says Flynn.

This document is subject to copyright. Other than any fair dealing for private study or research purposes, no part may be reproduced without written permission. The content is provided for informational purposes only.