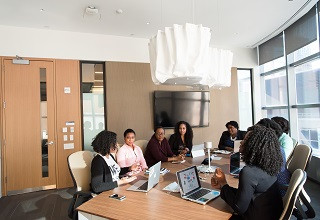 Drucker found that while risk can’t always be avoided or even reduced, it can be controlled. This is important because potential success often depends on the amount of risk. Sometimes the greater the risk, the greater the reward and the chance of success. Furthermore, the risk may be so obvious that a potential action may seem unlikely and be ignored by an adversary or competitor, making the strategy work because of the risk.

During World War II, aircraft designer Geoffrey de Havilland struggled because aluminum and steel were in high demand. In response, he designed and built a fighter bomber using the abundant but highly unlikely material, wood.

This had not been done since World War I and was thought by some to be impossible in modern air warfare. De Havilland removed all armor and defensive weaponry and developed a twin-engined bomber that was very light, with a crew of just two. Its bomb capacity and range was that of a heavy but well-armed four-engined bomber.

He called it the “Mosquito”. Capable of reaching speeds of 400 mph, it was one of the fastest aircraft of the war and operated effectively at both high and low levels, making it extremely versatile. About 8,000 wooden bombers were built. Due to the speed of the aircraft, the losses were not excessive and de Havilland’s risk was well worth it. Risk acceptance is as important a factor in business as it is in war.

To eliminate the need for sharpening, the blade was thrown away when dull in order to use a new blade, however this was more expensive to produce than a straight razor. In fact, Gillette had to practically give away the razors and make money just selling blades, which was a major risk.

The first sale was for just 51 razors and 168 blades, although a year later the company had to produce 90,000 razors and nearly 13,000,000 blades to keep up with demand. The risk had been significant, but the product created a profitable industry.

Focusing on risk reduction may be wrong

Drucker saw that when they focused on reducing risk, professionals in many professions often assumed that existing trends would continue, but this was almost never true. The action of a competitor or something in nature or human affairs, including a pandemic, war or the weather, could change everything.

Even Drucker erred as a journalist when he predicted a continuation of the stock market bull run in a newspaper article he wrote just before the Great Depression of 1929. After this experience, Drucker advised managers not only to expect change but, better yet, than starting it with planned innovations and carefully analyzing and accepting the right risks.

Drucker believed that it was important not only to take the right risks, but also to establish controls over the risks taken. However, he cautioned that risk control was difficult due to three important characteristics:

The Challenge of Objectivity: The “Hawthorne Effect”

The control selected at the Hawthorne Works, a factory outside Chicago, was lighting conditions. One experiment examined the effect of increased lighting on work productivity. It was assumed that the latter would increase as power increased and lighting became better and better, and it was so at first.

However, one week the wrong bulbs were used by mistake and the power was reduced. Productivity should have decreased, but it improved. It wasn’t a miracle or a measurement error, and neither were these unique bulbs. What had happened was that the workers expected the lighting intensity to increase on a weekly basis, and this motivated them to work harder to achieve the expected results.

Today this is called the “Hawthorne Effect.” He shows that the novelty of conducting research with increased attention to measured outcomes can have an impact on the results. Drucker said: “The controls do not apply to a falling stone, but to a social situation with living, breathing human beings who can be influenced by the controls themselves.”

It can be relatively easy to measure effort or efficiency, but much more difficult to measure actual results with the control. Drucker pointed out that there was no value in having the most efficient design department if he was efficiently designing the wrong products.

Controls are also difficult because some outcomes, while important to risk, are not noticeable or even measurable. Even if you can predict that eventually an earthquake or pandemic is inevitable, precise knowledge about the date, size, and resulting damage is unknown.

Changes were anticipated with the introduction of the pocket battery calculator. It caused the almost complete disappearance of the ubiquitous slide rule, made by engineers and manufactured as the sole product of several established companies.

First, they had to be inexpensive, or the cost of employing the control itself could create problems, significant in important ways, and appropriate to what it is measuring. Absenteeism of an annual average of 10 days per employee sounds acceptable, but if one of two employees is never absent, the average absence is created only on the other.

Second, the measurements must be appropriate to the phenomenon being measured. Victor Kiam, an entrepreneur, bought the bankrupt Remington Electric Razor Company in the 1980s, making it profitable. He wrote a book explaining his success that he promoted on television along with the razor.

His television promotions were successful and the book sold well, but some said it offered few useful insights to explain Kiam’s success at Remington. However, it sold more than 200,000 copies, surpassing many books on entrepreneurship published at the same time.

Thus, the author had earned $450,000 in royalties, which was $1.5 million less than Kiam’s advertising cost. He may have been willing to take this loss for bragging rights and possibly to promote the company’s razors, but book sales contributed little to his sales. While sales numbers were typically used to represent the book’s value to the reader, in this case it was questionable.

Control requirements five, six, and seven are equally important. First, they must be timely. The results are a costly waste of time if the information received arrives too late to be useful. They should be simple, as complicated controls can cause confusion and lead to other errors. Finally, they must be action oriented, because the controls are not of academic interest, they are to implement the strategy and action with the appropriate risk.

Finally, the ultimate control is the organization itself that operates with rules, policies, rewards, punishments, incentives, resources, and capital assets. However, your success comes from people and their daily actions, sometimes not quantifiable, such as the impact of customer interaction, morale and company policies.

While expressions of actions, including compensation, may be quantifiable, employee sentiment, drive, ambitions, leadership, vacations, and health may not be so. As an operating system, the organization cannot be precisely quantified except by results or progress toward defined goals.

Consideration of risk is essential. However, it is important to choose the right risks and control them by considering all the factors that may affect them. Knowledge is power, or at least stored power.

Selecting the right risks and monitoring the seven important aspects of controls identified by Drucker signify effective risk management. A manager cannot do more, nor should any manager consider doing less.

Has your company taken steps to manage organizational risk? Let us know in the comments below.