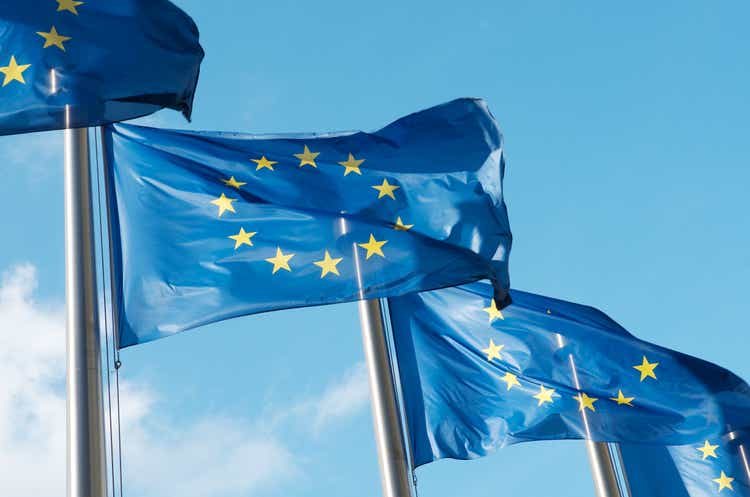 Did you know that European stocks are easier to trade profitably than North American stocks?

That seems contradictory, doesn’t it? Information about them seems hard to find. Most stock-oriented websites don’t cover them: European stocks are only listed if they have ADRs teletypes, and often nothing is written on them. Many brokers do not offer them. Not only that, but you have to convert currency, account for stamp taxes, and keep track of the different hours for the different exchanges.

So what’s easier about European stocks?

Part One: Why It’s Hard to Pick Winners in the US

Perhaps, like me, you think stock picking can be rewarding. But stock picking has gotten a bad rap lately because the US market is so well tracked. It often seems like the arbitrage opportunities are gone and if a stock appears to be way down in price, there is usually a very good reason for it.

In 2011, Portfolio123, a website dedicated to helping investors create profitable trading strategies based primarily on fundamental data, created a series of ranking systems based on five categories of factors: Growth, Momentum, Quality, Sentiment, and Value. . Eight years later, three of Portfolio123’s analysts (Marc Gerstein, Riccardo Tambara, and myself) revised those rating systems to a small degree, added one more category (low volatility), and combined them to create what we call the Core Combination classification. .

This ranking system was not optimized in any way through extensive backtesting. It was meant to be a starting point for investors and contained all the usual factors, nothing esoteric or far-fetched. For example, the growth system was simply EPS growth, sales growth, and operating income growth, with 1/3 weight each; each of them was divided into basic growth and acceleration, and then subdivided by time period. The low volatility classification system was half beta and half price volatility, with each having 1-year, 3-year, and 5-year lookback periods.

Of course, you could create a better ranking system through extensive research and back testing, including many more esoteric factors like stock turnover, net operating assets to total assets, and accruals; add size factors to the mix; and modifying a number of other measures. That’s what I’ve done with my own personal rating systems, and I’ve made a lot of money using them on North American stocks. It has not been easy. I’ve spent tons of time fine-tuning my systems and placing trades on illiquid stocks.

Part Two: Why it’s easy to pick winners in Europe

So what happens when we use the Top Combination to pick Europe’s top 50 stocks?

First, let’s exclude some countries. Turkey, Romania and Hungary rank high in the corruption indexes. And forget about Russia (which isn’t even included as part of Europe in Portfolio123’s coverage).

Next, let’s start with just the 500 largest companies, like we did in the US, and this time I’ll use a higher slippage (0.5% per trade) to offset currency exchange, commissions, and stamp duty . The results are poor. But if you expand your universe to the top 1000 companies, you’ll get a excess return on the MSCI Europe index of 3% per annum. Top 1500 companies? 6.5% per year. Top 3,000 companies? 13.5% per year.

Now here’s how the same ranking system performed on the top 3,000 European stocks. The top 5% earn a staggering 25.5% annually.

What makes this better is that these results are truly out of sample. When designing the main combination system, we drew to some extent on our experience with backtesting US equities. We didn’t actually test the ranking system much (we didn’t want to over-optimize it), but most of the factors had been individually tested. On the other hand, we did absolutely no testing on European stocks, for which we only recently added data. This is a completely new dataset that we have never tested at all.

So you can see that it is much easier to pick winning stocks in Europe. You can use all the factors that appear to have been arbitrated in the US to create winning screens and ranking systems.

Business costs should not be taken lightly. Currency conversion fees will range from 0.02% to a whopping 1%, depending on the broker and currency. Fees can be significantly higher than for US stocks. Stamp duty can be expensive: the UK charges 0.5% on all share purchases, France charges 0.3%, Spain 0.2%, Italy 0.1%, and Ireland tops them all. everyone, charging 1% (note that these taxes are only charged when purchase a stock, not when you sell it). There are some stocks and some exchanges that are difficult or impossible to trade from the US and while some brokers allow European trading in retirement accounts, others don’t, and one (Fidelity) has you place them over the phone.

I currently have shares in 18 European companies. My biggest holdings are in EdiliziAcrobatica (EDAC:ITA), a Genoese construction company; Arctic Paper (ATC:POL), a Polish paper manufacturer; Anglo-Eastern Plantations (AEP:GBR), a British company that owns rubber and palm oil plantations in Indonesia and Malaysia; Torpol (TOR:POL), a Polish railway infrastructure construction company; and Western Bulk Chartering (WEST:NOR), a Norwegian shipping company. (I take Peter Lynch’s saying to heart: the duller a company sounds, the better investment it’s likely to be.) But I’m sure you can find plenty of other gems if you look hard enough.

Or maybe not even that hard.