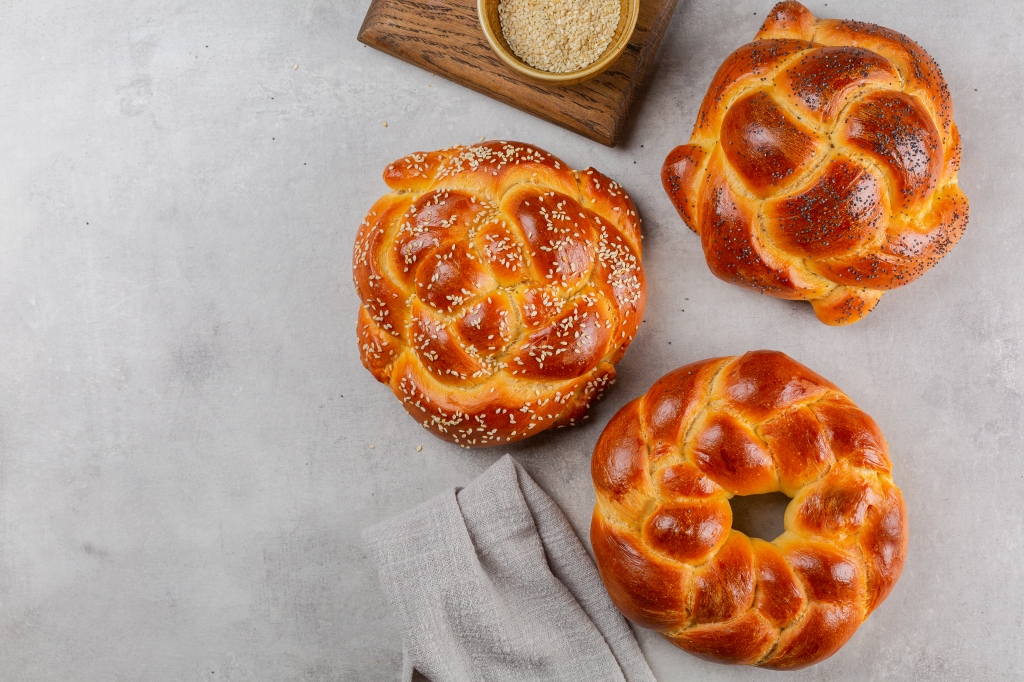 In AD 70, the Roman Empire destroyed what was known as the Second Temple in Jerusalem and with it the ability of the Jewish people to continue their sacred sacrificial system.

Thus, the rabbis transferred many of the rites performed in the Temple to the home (as a representative of the Temple), especially to the table of the hearth, symbol of the sacred altar of the Temple. The rites of lighting candles, washing hands, blessing the wine, everything would now take place at the home table.

From there, the daily bread of the meal took on a new meaning as a symbol of the ancient sacrifice of bread brought to the Temple. This was a portion of the bread baked by the Israelites in their normal course of work in the kitchen, set aside and offered as sustenance to the Temple priests.

Those bread offerings originated in obedience to the Bible’s mandate in Numbers 15:20: “Of the first fruits of your dough, you shall raise a portion as an offering.” Leaving out that portion was called “taking challah” since “challah” meant “bread” or “bread.”

Today, observant Jewish bakers remove a small portion of the dough from their challah (this is a redundancy, as the name for the portion is called “the challah”) and burn it, in the oven or in a pan, to remind them of the bread given to the priests in distant times.

On Shabbat, every Friday night, the head of the household (himself a representation of the Temple priest) breaks off a piece of the loaf of challah and passes it to a member of the family. Once again, a take on, so to speak, haha ​​haha.

The importance of these acts and gestures is highlighted each year at the time of the High Holidays that begin each year on Rosh Hashanah, the Jewish New Year. For 2022, that is the night of Sunday, September 25.

Usually, for Rosh Hashanah, bakers make round (or turban-shaped) challahs as a symbol of the cyclical nature of life, or as a symbol of hope that the coming year will be complete and not affected by anything. tragedy, or as a “crown” in honor of God, or as a representation that one year begins and another ends. There it is, drawn circles of dough.

On Rosh Hashanah, the first piece of broken challah can be dipped or smeared with honey, instead of salt (as at all other times of the year, for example, on Shabbat every Friday), a symbol of the hope that sweetness, not bitterness or “tears” (salt), will enter the lives of the Jews in the coming year.

It is quite inspiring for me, as a non-Jew, to see that the simple baking of challah, each instance, is a call to obey a simple command and the presentation of an original sacrifice that has deep meaning.

The challah recipe here is from Luisa Hagemeier, a Denver-based baker (@challahradohearth) who earned her challah chops at Silver Moon Bakery, her New York hometown. She has been baking challah since she was 3 years old. It took her four months to master the two-braid challah, but she finally got it on the apron sides of a Muslim man named Hayouba in Silver Moon.

By Luisa Hagemeier, adapted from smittenkitchen.com, adapted from cookbook author Joan Nathan. All measurements in grams are by weight. Makes 3 medium or 2 large loaves.

Beat the water, yeast, and 1 tablespoon of sugar in a bowl (or in the bowl of an electric mixer, if using one). Wait until yeast mixture bubbles, about 5 minutes. Add half the flour and all the sugar (or honey), oil, eggs, and additional yolks. Mix by hand or on low speed until blended. Add the remaining 1/2 of the flour and salt, mixing by hand or on low speed until combined and broken up. Continue kneading (at least 10 minutes), or increase speed to medium, until smooth and pulls away from sides of bowl.

Coat large bowl with cooking spray; Place the dough in the bowl and rotate it so that the entire ball is covered in oil. Cover with plastic wrap and let rest in a warm place (or in your oven on the proofing setting, if you have one) until about doubled in size, about 1 hour.

With parchment paper, line 2-3 baking sheets (depending on size of pans). Uncover dough; divide it into the number of loaves you want to make, then divide each section of dough into the number of strands you need for the braids. Wind each strand into a rope with tapered ends.

Braid loaves and place on baking sheets; spray tops of buns with cooking spray and cover loosely with plastic wrap. Let rise 1-2 hours, until doubled in size. Preheat oven to 375 degrees. Glaze each loaf with beaten egg, either with a pastry brush or rolled cheesecloth. For best results, brush in one direction only.

Place the sheets in the oven and bake for 10 minutes. Lower the temperature to 350 degrees. For medium loaves, bake for about 25 minutes (or for large loaves, about 30 minutes), testing for doneness with a wooden toothpick or by the hollow sensation when tapped on the bottom of the loaf. Let cool.

Sign up for our weekly newsletter, In The Know, to get entertainment news delivered straight to your inbox.