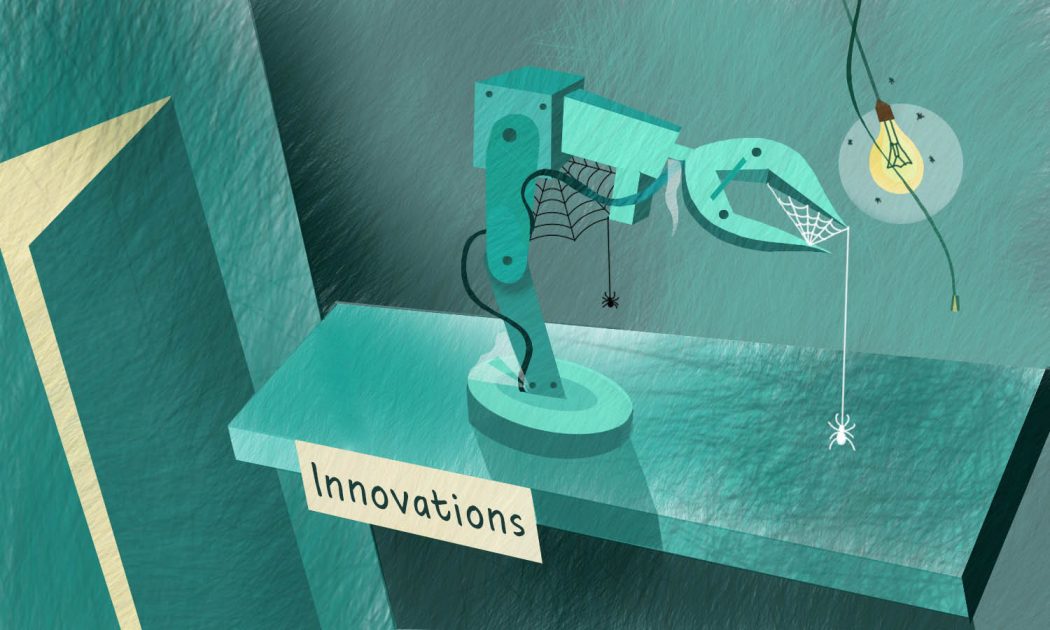 So what can be done to encourage breakthrough innovation? Is there some kind of recipe?

Not quite. But a growing body of research on innovation suggests there are things policymakers, companies, and even individual leaders can do to ensure that as many breakthroughs as possible cross the finish line.

Sure, we know that innovation can be expensive. But unfortunately, it seems that when funds are tight, the the majority transformative projects are often more likely to be eliminated.

Take this study from Kellogg strategy professor Sara Moreira. She and a colleague examined a large dataset of U.S. supermarket, drugstore, and department store purchase transactions from 2006 to 2015, a period that spanned the Great Recession.

They found that during the recession, product innovation dropped dramatically. But companies with less access to credit fared worse. And while the recession didn’t have much of an impact on new product launches that were only slightly different from the companies’ original products (think “new and improved” formula for your favorite toothpaste), restricted access to credit was related to a substantial drop in the creation of more innovative products.

The blow to innovation can last for years. “The impacts of the crash are not temporary,” says Moreira.

A separate study by Kellogg finance professor Dimitris Papanikolaou also supports the importance of finance for breakthroughs, this time in the pharmaceutical industry. He and his co-authors found that after a financial windfall, companies were more eager to develop riskier, more innovative therapies. An implication? For the most cash-strapped companies, “financial frictions may be limiting innovation,” says Papanikoloau.

Many new companies make decisions about product development with an eye toward eventual acquisition. But new research from Kellogg strategy professor Niko Matouschek argues this trend could be leading to “more conventional, less novel innovation.”

A model he built with a colleague suggests that if acquisition is off the table for startups, they typically seek bolder innovations than older, more established companies. But the possibility of being acquired in the future may push startups to be more conservative and create products that are already quite similar to existing ones. This is because similar products may pose a greater competitive threat to a large company, driving up the acquisition price.

Stronger antitrust legislation could help curb this strategy. If large companies are prevented from buying so many startups, those smaller companies could head off in new directions, a high-risk but high-reward endeavor that could ultimately benefit consumers.

“That’s going to induce the participants to engage in more radical innovations, which are likely to fail, but every once in a while they’re going to be spectacularly successful,” says Matouschek.

Trust at the top could be another key to transformative innovation because it creates a culture where employees feel free to “accept failure, make mistakes, and learn from those mistakes,” says Kieu-Trang Nguyen, assistant professor of strategy. at Kellogg’s.

This is the conclusion of a study he conducted, which found that when a company replaces its CEO with one who is likely to be more trustworthy, the company produces more patents. Furthermore, individual researchers who are more likely to have the trust of the CEO produce higher-quality patents (measured by the number of citations they eventually receive), suggesting that these individuals use this trust as a license to take higher risks. dramatic in the search. of innovation

Nyugen’s study suggests that bolstering trust between CEOs and their innovation teams can have a surprisingly large impact on the team’s ability to do high-quality, innovative work.

“We know that culture is hard to change,” she says. “So I was surprised to see a fairly large effect, meaning that the organizational cultures of companies are changing faster than I initially thought. The top leaders seem to have a bigger impact than I expected.”

4. Reconsider the size of your R&D team

That investigative team you trust so much? Should you keep making it bigger and bigger?

When it comes to innovation and impact, team size does matter, but it’s not as simple as “bigger is better.” That’s the conclusion of research by Dashun Wang, professor of management and organizations at Kellogg, and colleagues, who analyzed the citation patterns of 50 million articles, patents, and software products developed between 1954 and 2014. They found that projects from large teams get more appointments and acquire them faster.

But these large teams are more likely to build on existing research than to propose new directions. Meanwhile, small teams tend to forge entirely new paths of discovery.

At a time when research teams are getting larger, Wang says it’s important to continue to support individual scholars, duos and trios. “Otherwise, there won’t be small teams giving you the disruptive idea for big teams to develop.”

Finally, as you build your perfect R&D team, make sure you don’t rule out older innovators. As our understanding of the world becomes more complex, and the body of scientific knowledge accumulates over time, so does the time it takes for an individual to master this knowledge.

This is likely one reason why the age at which scientific researchers do their most impactful and breakthrough-worthy work has increased over time, according to research by Kellogg strategy professor Ben Jones.
has found.

And for all the hoopla about young tech disruptors like Elon Musk and Mark Zuckerberg, in their twenties and teens, respectively, when they founded their first extraordinarily successful companies, older tech entrepreneurs actually have the upper hand. When Jones and his colleagues analyzed data from the US Census Bureau, they found that among the fastest-growing tech companies, the average founder was 45 years old.
when they started their business.

“People later in life have more experience, whether it’s market knowledge or deeper scientific or technical knowledge,” says Jones. If our biases toward younger innovators exclude older colleagues from crucial opportunities, we all lose. “What are we not getting?” Jones asks.