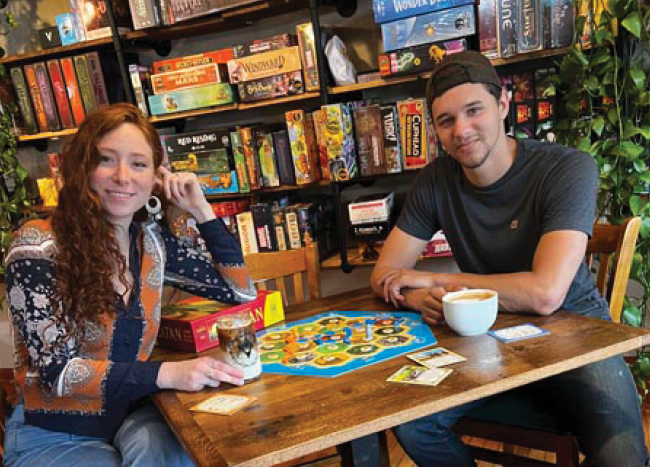 We all know the stereotype of a “gamer”: that person is expected to be knowledgeable about all things nerdy, to the point of making non-nerds’ eyes glaze over, but disconnected from real-world concerns and events. current, out of the world. calendar of new film and television releases. So where does one go when he’s ready to step out into the light of day?

The answer, dear video game fans, is a place where people, maybe even a diversity of people, can come together to play non-sports type games. It can be a bookstore or a comic book store. In the best of all possible worlds, it could be a dedicated gaming cafe. Those tend to be rarer than mithril, especially in small towns; but residents of New Paltz and the surrounding area have reason to rejoice, because there will soon be one downtown near you.

The Gunks Gaming Guild & Café is getting ready for customers at 17 Church Street, just off the Huckleberry entrance. The soft opening is projected for sometime between September 19 and 23, with a more glitzy Grand Opening in October or November. Hours of operation will be Tuesday through Thursday from 11 am to 8 pm, Friday and Saturday from 11 am to 11 pm, and Sunday from 11 am to 6 pm.

Formerly home to Cafe 17, and before that an antique shop and artist’s workspace, this building is one of the oldest in the Village of New Paltz that isn’t a Huguenot stone house. Consequently, it does not fit the aesthetic image of the typical gamers’ hangout. Comic shops are often looking for a futuristic Star Wars/Trek vibe, or a pop art sensibility with lots of primary colors, or a dark goth or steampunk look with skulls or tentacles. This is a space built in the 17th century, recently renovated with plenty of warm woodwork. The old plank floors are so uneven that the new owners had to order self-leveling bases for their card tables.

So what kind of decoration do you add to make such a space attractive to F/SF fans? Simple and obvious answer: you make it look even more like a hobbit hole than it already is. Use repurposed barn wood and cutting boards to build counters and shelving. You’ve got a handy custom hexagonal game table for Dungeons & Dragons, with built-in cup holders and a lip to keep 20-sided dice from rolling on the floor. You paint the walls with autumn colors and hang banners on tapestries with the logo of the cafe as heraldry. Add a cozy sofa and a couple of rocking chairs. You turn the literal cupboard under the stairs into a Harry Potter themed nook for kids.

And then, on a wall at the end of the longest space, the Hobbiton Room, you drop your barista, who is also an artist, Emily Pickering, with instructions on how to paint a suitable mural. “I wanted Ridge, and I wanted trees,” says Amanda McDonald, co-owner of Gunks Gaming Guild. What the artist offers is a Sky Top panorama, but with Barad-dûr, Sauron’s Dark Fortress, replacing the well-known Smiley Memorial Tower. To the sides, frolicking among the trees, is a scattering of Kodama, the cute little forest spirits from Studio Ghibli’s classic animated film. princess mononoke. Have you already fallen in love with the place?

McDonald and her fiancé/business partner, Robert Gamble, hardly fit any stereotypes you might have in your head about video game geeks. They are an attractive, bright, outgoing and articulate young couple who have worked with special needs children, Amanda as a teacher and Rob as a personal trainer. Originally from Monroe, where they both now live, she just finished her Masters in Early Childhood Education at SUNY New Paltz. She was a track star and avid snowboarder in high school, though she says, “I grew up in a nerdy household.” The couple got engaged in January in Colorado, where a happy visit to a board game cafe convinced them to start a similar business back East, rather than invest their energies in planning a wedding right away.

Gamble is also a self-taught barista whose “passion for coffee” fuels the other half of what this cafe will offer: a stylish coffee bar stocked with pastries and bags of beans from artisan roasters with geeky names like Valkyrie and Brandywine, to be processed. . by high-end equipment imported from Italy, including a La Marzocco espresso machine. Six taps will dispense craft beers, cider and mead. There’s even a brilliant device called a pitcher rinser that sprays water upwards, much like a bidet. The store also has a full kitchen, so the food menu will start with “small bites” and pastries and progress to more elaborate offerings as they become established.

Getting all of this equipment in place during a time of supply chain issues took them nine months, says Rob, but in the meantime, they’ve acclimated to the New Paltz community, which they’ve found welcoming and well-aligned with their personal worldview. His dream is to make the new business appealing to a diverse crowd and not just hardcore gamers. “It’s an amazing world that we hope to bring everyone into,” says Amanda. By emphasizing inclusion, both are adamantly opposed to the policing attitude that has caused divisions in the gaming community and has in the past made it difficult for women, girls and people of color to feel welcome. “It’s a scary thing,” says Rob. “We hope to deconstruct that here,” agrees Amanda.

To attract customers, in addition to offering great coffee and tasty snacks, they have a library of over 200 board games on the shelves, which can be rented for $10 on weekends, $5 on weekdays (or for kids and students at any time). RPG nights, including D&D and Magic the Gathering, will be scheduled regularly, along with introductory novice lessons and character creation sessions. Trivia nights, murder mystery nights and Renaissance Faire-themed events are also planned.

The “Guild” piece of the trade name refers to the place that is the base of operations for an ongoing “in and out” Dungeons & Dragons campaign, with multiple layers based on the experience level of the players. Players will be able to find groups at a comparable level through a Discord calendar. The hope is that even seniors who missed out on RPGs when they first became popular won’t be intimidated by trying them out. “You’re telling stories with your friends and rolling dice in between,” says Rob.