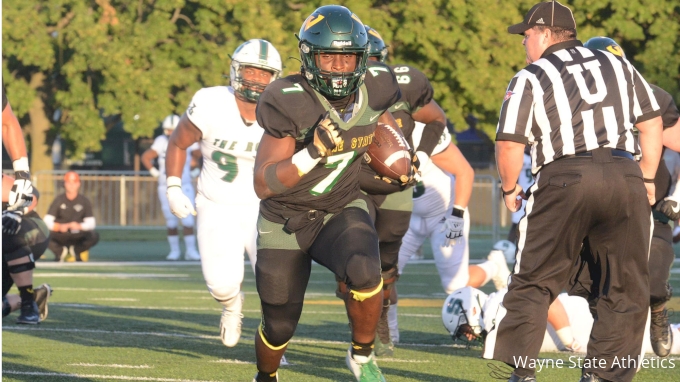 Davenport sits alone atop the GLIAC after a 31-21 victory over Northern Michigan in Week 3; of course, it was the only conference game thus far. The upcoming 2022 season conference matchup headlines week 4, Davenport returns to non-conference competition in one of the best non-league contests of the week, and GLIAC counterparts Grand Valley and Wayne State meet. meet on a single date outside of the conference.

Undefeated Saginaw Valley State is back on the road after a 35-14 victory over former GLIAC member Northwood in Week 3. The Cardinals continued to shine on both sides of the ball. They’re averaging 485 yards per game on offense, while the defense has been just as dominant holding opponents to under 250 total yards per game.

Senior quarterback Andrew Brito has held steady, completing 64 percent of his passes for three touchdowns, while the running offense has rolled. Six Cardinals ball carriers already have 75 yards or more, led by Dante Barthwell’s 200 with four touchdowns. Brito has added 178 rushing while Tyler Amos is at 150 yards and four touchdowns.

“I had never heard of Saginaw before in my life. The fact that it has become such a blessing in my life is just amazing.”

His CFB journey has taken him to 4 schools in 6 years.

Meanwhile, Tech went on the road last week at Midwestern State and controlled the game for three quarters. Unfortunately for the Huskies, their 21-7 lead going into the fourth evaporated when MSU outscored them 21-0 in the final 15 minutes. The loss left Tech at 1-2.

Husky’s offense has struggled during those three games, averaging just 231 yards and 17 points per game so far. However, last year against SVSU, Tech got just enough offense to complement a strong defensive effort in a thrilling 21-20 win.

After a couple of tough ranked opponents in the first two weeks, Grand Valley took a breather before starting conference play. The Lakers blew out Lincoln (CA) to a 66-7 final last week, racking up 520 yards of offense while limiting Lincoln to just 148. Quarterback Cade Peterson threw a pair of touchdowns, as did backup Cal Endicot on relief duty. A big key to the Lakers’ 3-0 start has been their run defense, which has given up just 218 total yards and fewer than three yards per carry to open the year. Combined with eight forced turnovers, GVSU’s defense is dominant.

Wayne State looks to rebound after losing at home to Wisconsin-La Crosse last week, 28-21, with a 21-0 second quarter dooming the Warriors.

Wayne State’s rushing attack has been solid with more than 160 yards per game, but the passing offense hasn’t followed up, with three interceptions, less than 50 percent completion and just 132 yards per game.

Kendall Williams and Myren Harris give the Warriors a powerful 1-2 backfield combo. They have combined for more than 400 yards and scored four touchdowns. However, getting them to take on an excellent, fast defense from GVSU may require bringing the passing offense to life.

Grand Valley rolled into last season’s meeting, 62-13, scoring 27 points in the second quarter after trailing 10-7 in the first.

Another showdown between former GLIAC foes, Davenport looks to keep up the good times after last week’s GLIAC opener win over Northern Michigan.

The Panthers (2-0) have done it with defense: They had three interceptions, forced two fumbles and held opponents to under 160 total yards down the stretch.

Offensively, Caleef Jenkins has led the charge while quarterbacks Johnny Saavedra and Jason Whittaker have split the time. Whittaker gives the Panthers a spark, throwing a couple of scores and no interceptions on limited serve.

Northwood was outscored by Saginaw Valley for a 35-14 final last week and begins the year 2-1, defeating lesser opponents in Kentucky Wesleyan and Madonna in both of their wins.

Davenport won last season’s game in a close 21-14 battle, during which the Panthers jumped out to a 14-0 lead in the first quarter, then sealed the victory with a third-quarter touchdown.